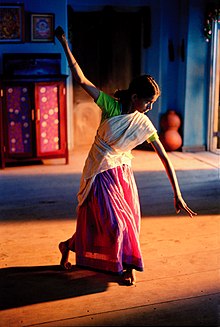 Vanaja means the one born in a forest, untamed and pure! It is also another name of Parvathi, the goddess of strength.

Rajnesh Domalpalli made this film as a thesis for a Master of Fine Arts course he pursued at Columbia University. While working in Silicon Valley as an Engineer, Rajnesh Domalpalli wanted to pursue film making. So he joined Colombia University. He also made a few short films. He is trained in Carnatic (South Indian classical) music in both vocals and Veena. As a hobby he wrote short stories in college, one of them called “The Dowry” was broadcast by the BBC World Service.

Vanaja is the only feature length film that he made. His website says he is working on another film called Avani. From what I read, the filming of Vanaja took a while. The real work on the film started in 2003 with the recruiting of actors.  All the actors were non-professional and had to be trained in acting before filming. The Mamata Bhukya was trained in Kuchipudi, the classical dance of Andhra Pradesh for a year.

Before I start writing about the film, I want to mention an art form that is used in this film. Burra katha is an art of telling stories through songs. It is normally performed by 3 people. One main performer and the two co-performers. It was a popular form of entertainment before TV became ubiquitous. It is a dying art. In an interview the director said that one of the points he wanted to make in the film is to preserve the arts and traditions of the region.

The film opens with a performance of Burra katha. Just before the performance begins, Vanaja a 15 year old daughter of a fisherman is shown fighting with boys who are harassing her. The program is started by the local dorasani (rich woman whose family is wealthy and owns a lot of land), named Rama Devi. She was a well known Kuchipudi dancer in youth. Vanaja wants to be a dancer. She starts working in Rama Devi’s house. Rama Devi takes interest in her and starts training her in music and dance. Vanaja is shown to be a fighter and knows how to get things.  Rama Devi’s son Shekhar arrives from abroad. Shekhar is being groomed to be a politician. Vanaja gets attracted him in the beginning. Soon it takes an unhealthy turn and Shekhar rapes Vanaja and she gets pregnant. Rama Devi decides to take the child and raise him as Shekhar’s son. She tells the villagers that the mother of the child is dead. Vanaja wants revenge and her son back.

The film has strong female characters. Vanaja is a 15 year old at the beginning of the film. Her father is an alcoholic and mother dead, she has to pretty much grow up by herself. She is feisty and ambitious. After she gets raped, she wants to punish her assaulter at her own expense, resulting in an ending that is heartbreaking. Rama Devi is another strong character. She sees a bit of herself in Vanaja, and wants to nurture her, despite the problems. Her character has shades of gray. She is ready to accept the grandchild (which is very unusual, in many feudal families illegitimate children are not recognized as a part of the family), but she doesn’t want to tell people that Vanaja is the mother of the child. She is caught in her self interest, “family prestige”, and her affection for Vanaja.

Before I get into other details, I want to write what has not worked in the film. This film is made for western audience. It comes at an expense of authenticity. Vanaja’s father is a fisherman. He fishes in the sea. The dialect used in the film is from Telangana state. There is no coast line Telangana. There are fishermen in Telangana, but they fish in rivers and lakes.

Dialogue in the film feels very contrived. I suspect the dialogue was written in English and was translated to Telugu. Some sentences sound weird as a result. If you are not familiar with the language you may not notice. This is one instance where subtitles are better than the dialogue itself. As a Telugu I found it tough to deal with.

Performances in the film are fabulous! Mamatha Bhukya who played Vanaja and Urmila Dammannagari who played Rama Devi are both excellent! This is the first film for both of them, and they do not have any background in acting. Mamatha’s expression during her final dance of Mahishasura mardhini (goddess Durga slaying demons) while she slays her own is something that one would remember for a longtime. People who played other characters are great as well, with one exception. Karan Singh, the actor who played Shekhar is wooden. He looks good. He thinks that’s all he had to do on the screen. Shekhar is weak and egotistical. His character had a lot of potential.  Karan Singh lets it down.

Saying this film’s score composed by Indira Amperiani and Bhaskara S. Narayanan is great is an understatement. Most of the score is Carnatic music. Some rarely available folk music has been used as well. The dancing and singing in the film is a bit rustic and yet the purest. Jayadeva’s ashtapadi “Sa virahe tava deena” set in raga Behag is my favorite rendition of this ashtapadi!

Overall Vanaja is a beautiful, melancholic love letter to the Indian arts! It is a must watch!