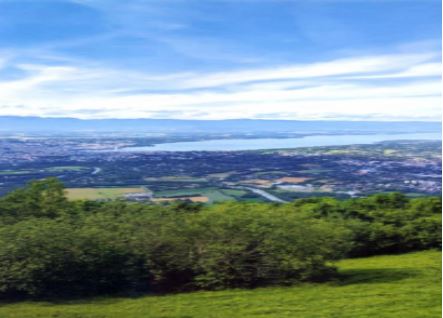 Our long journeys for the summer of 2019 were planned in March itself. First, we (me and my husband) decided to go to New York on 15 May to spend one month with our daughter and son-in-law. From there we were to go to Geneva in Switzerland as our dear old friend Vishnumohan, who stays there with his family, invited us.  We were so excited to go there as Tracey, Vishnumohan’s wife, promised to take us to some villages and a town around Geneva.  Accordingly, we booked our Swiss International Airlines flights as they turned out to be cheaper.

After staying in New York for one month, our journey to Geneva began on 15 June.  Our Swiss flight started at 5.30 in the evening from Newark Liberty International Airport in New Jersey. The travelling time was eight hours. Geneva’s time zone is six hours ahead of New York and we reached Geneva at 7.30 in the morning.

Geneva airport was small but comfortable. It did not take much time to complete the formalities of immigration. Vishnumohan and Tracey received us with warmth and drove us to their house in Grand-Saconnex in ten minutes.

They have a beautiful house with roses of different hues, bright spring flowers, Kiwi and Orange trees and a lovely lawn! From the lawn we could see the Jura mountain range and we were so thrilled to know that we could watch sunsets over the mountains in the evenings. And the advantage was that the sunsets their happen only after 8.30 or 9 p.m.

Vishnumohan was born in Coastal Andhra and brought up at various places in Telengana due to his father’s transferable job. We had met in Jawaharlal Nehru University, Delhi, and maintained our friendship since that time. He retired from the International Telecommunication Union, one of the UN Organizations situated in Geneva.

His wife Tracey is an English woman from Oxford. She is working in the Graduate Institute of International and Development Studies in Geneva. They have two sons and a daughter. The elder son Arun is studying hotel management in Geneva. Their daughter Abha just finished her graduation from the University of Warwick. The younger son Srinivas is doing his engineering from the same University. Srinivas was not in Geneva at that time. Arun and Abha were so spontaneous in their affections and we felt that we knew them since ages.

After we recovered from jet lag, Tracey told as that she would take us to some French villages near Geneva and to a slightly far off German town. She had taken leave from office to drive us around personally. We were so happy by her generous offer!

The next day, with Tracey at the wheel, we started off after our late breakfast. We travelled for an hour or so and reached Satigny municipality which is situated in Geneva Canton (more or less equal to a small state in India). It is the largest wine-producing municipality in Switzerland. It has an area of approximately 18.92 square kilometers and out of which 60% of the land is used for agricultural purposes. 80% of the people there speak French. German and Italian are the other important languages.

In Satigny municipality, Tracey selected two villages to take us to, namely Satigny and Choully. In French language they write the spellings of the villages in a certain manner but pronounce them differently! For example, Satigny is pronounced as `Satiny’ and Choully as `Shui’.

First we went to Satigny village and what a sight to behold! On one side there was the Jura Mountain range and on the other side Vine gardens! We forgot about everything in the midst of such beautiful surroundings. We drove further to reach Choully village. The scenery was the same there! We didn’t feel like leaving such an enchanting place which was serene, pure and pollution-free! Here and there, there were apple trees and wheat fields also. We could see people working in the fields.

On our way back, we stopped at a restaurant in Satigny village. There everybody was speaking in French. Tracey talked to them as she could speak French fluently. She ordered some wine for all of us,. After that we strolled around the village. At one place there was a tub full of clear water. Tracey said it was spring water. We drank the water and it was so tasty! The place was surrounded by plants with flowers blooming. The homes in the village were self-sufficient with vegetables, flowers, hens and dogs. We could hear the church bells ringing rhythmically now and then. We returned home with the  satisfaction of having visited French villages.

Another day, as Tracey planned, we set out on a journey to a town called Murten which is 130 Kms from Geneva and 27 kms from Bern, the capital of Switzerland. After travelling for two hours, we reached the place. Murten is a medieval town of 800 years. It is situated on the south-east of a lake of the same name. The town is the capital of the Lake District which is in the predominantly French speaking Fribourg Canton. In the Murten town, however, 77% people speak German and the next important language is French.

First, we went to Murten Lake which is a popular bathing lake, where the temperature becomes pleasantly warm quite early in summer. We sat on the shore and ate our sandwiches and yogurt. Some people were swimming in the lake and some sailing on the boats. One gentleman came with his dog. He made the dog sit on the shore and went for swimming. The dog sat dutifully waiting for him. There was a group of teenagers who were enjoying swimming and playing pranks on each other! After spending some time there, we started walking towards the town.

On the way, we saw a  museum but it was closed. We came to know that it has a large collection encompassing 6000 years of the history of the town and surroundings region which had pre-historic settlements. The archaeological remains included pottery, stone tools, wooden objects and animal bones. The town is also famous in history for the defeat of Charles the Bold (Duke of Burgundy) by the Swiss in the battle of Murten (1476).

The battle, we were told, is also well documented in the town’s  history museum. The entire town is surrounded by a wall which is the only surviving old wall in Switzerland! If we walk along side of the wall, we can see different parts of the town.

When we reached the front side of the town,  we came to know that last night the town people had celebrated the Mid Summer Night Festival. And it was continuing during the day as well. People were drinking and eating in groups. Seeing such vast number of people, I remembered our temple festivals in India, when people gather in large number. Small girls and boys were wearing white clothes. They were playing with water gums. This reminded me of our Holi festival!

We proceeded farther and saw a big town gate and on the top of it, there was a huge clock.  On either side of the gate are located French and German churches and we could hear church bells sometimes. In front of the gate was a long street called High street.  There were restaurants on either side of the street and many people gathered there also. We walked ahead and reached Castle Street. At the end of the street is a Castle which was built in 1255 C.E. At present some portions of the Castle are used as municipal offices and some as a hotel. In Europe it is very common to see castles at many places. 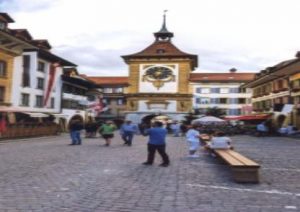 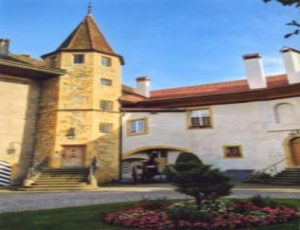 From the Castle, we could see the Lake and the houses below. On the other side of the Lake, there is vibrant life too! The boat trip from Murten to the vine-growing region of Vully takes about an hour. The slopes of Mont Vully offer a wonderful panoramic view of the Jura and the Alps. On our way back, we sat for sometime at a restaurant  and had tea and snacks. We started at 8.30 p.m. and reached Geneva in two hours. We had our  wish fulfilled of visiting a German town in Switzerland!

Another day, both of us went to the Geneva  airport along with Abha. At one side of the airport, there was a counter where we purchased our train tickets to Zurick because we had to board the plane there on our  return journey to India. We also purchased bus tickets so that we could move around in the Geneva city. Abha took us to some place, saw to it that we boarded the no.8 bus. We planned to go to a place called Beaumont in the French border adjacent to Geneva city, where we could climb the mountain Saleve. Mountain Saleve is 20 km from the centre of Geneva city. After getting down from the bus we were informed that there was a cable car to  go up. We followed the indications showing the path and reached the cable station. It was quite sunny and we felt a little tired of twenty-minutes walk.

The mountain is 1,100 metres high and is part of the Jura mountain range. For every fifteen minutes there is a cable car. We purchased two tickets for 28 francs and    entered the car.

In five minutes we reached the top. We felt relieved when the cool breeze touched our bodies. From the top we could see the Geneva city, Lake Geneva, the Fountain, Jura Mountains, Alps mountains and Mont Blanc. Mont Blanc, meaning White Mountain is 4807 metres high and is the highest peak of the Alps in Europe. The greenery on the top of Saleve was mesmerizing and we moved around for a long time. When we felt hungry, we ate burgers and drank cold coffee from a small restaurant.  Then we went down by cable car, boarded the bus end reached Vishnumohan’s place by evening.

We saw many places in the Geneva city as well but I had no intention to write about them as I was concentrating here on our journeys to the places around Geneva. On the last day of our leaving Geneva, we felt sad to leave Vishnumohan’s  family. Watching sunsets while having wine, our  conversations, laughter, dinner sessions that continued up to midnight, the journeys we made, exchanging thoughts and emotions – all are unforgettable!

We could not control our laughter when Arun and Abha narrated the funny incidents they encountered when they visited their relatives in Andhra. Arun’s way of speaking in Hindi is also hilarious. Abha is a good conversationalist and she has the ability to narrate the stories in an amusing and interesting manner. Last but not the least Vishnumohan and Tracey were such and an amazing and caring hosts!

Vishnumohan’s family came to the station and gave us a warm send off. We took leave by inviting them to India. We reached Zurick in three hours. That night we stayed in a hotel and next day boarded our Swiss flight to India. 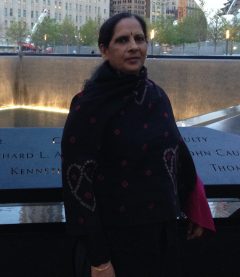 I was born and brought up in Guntur and my education up to Post Graduation took place there. I did my M.Phil., at Jawaharlal Nehru University, New Delhi. I worked as Associate Editor in a project related to Jawaharlal Nehru at Teen Murti Bhawan, New Delhi. Right now I am living in Hyderabad. After taking voluntary retirement, I started writing poems, short stories, essays and travelogues in Telugu. This is my first travelogue in English which I wrote as a tribute to Tracey who can enjoy reading it in English. Most of my writings in Telugu got published from time to time in different print and web magazines. I have plans to publish them as anthologies.

5 thoughts on “Attractions around Geneva”