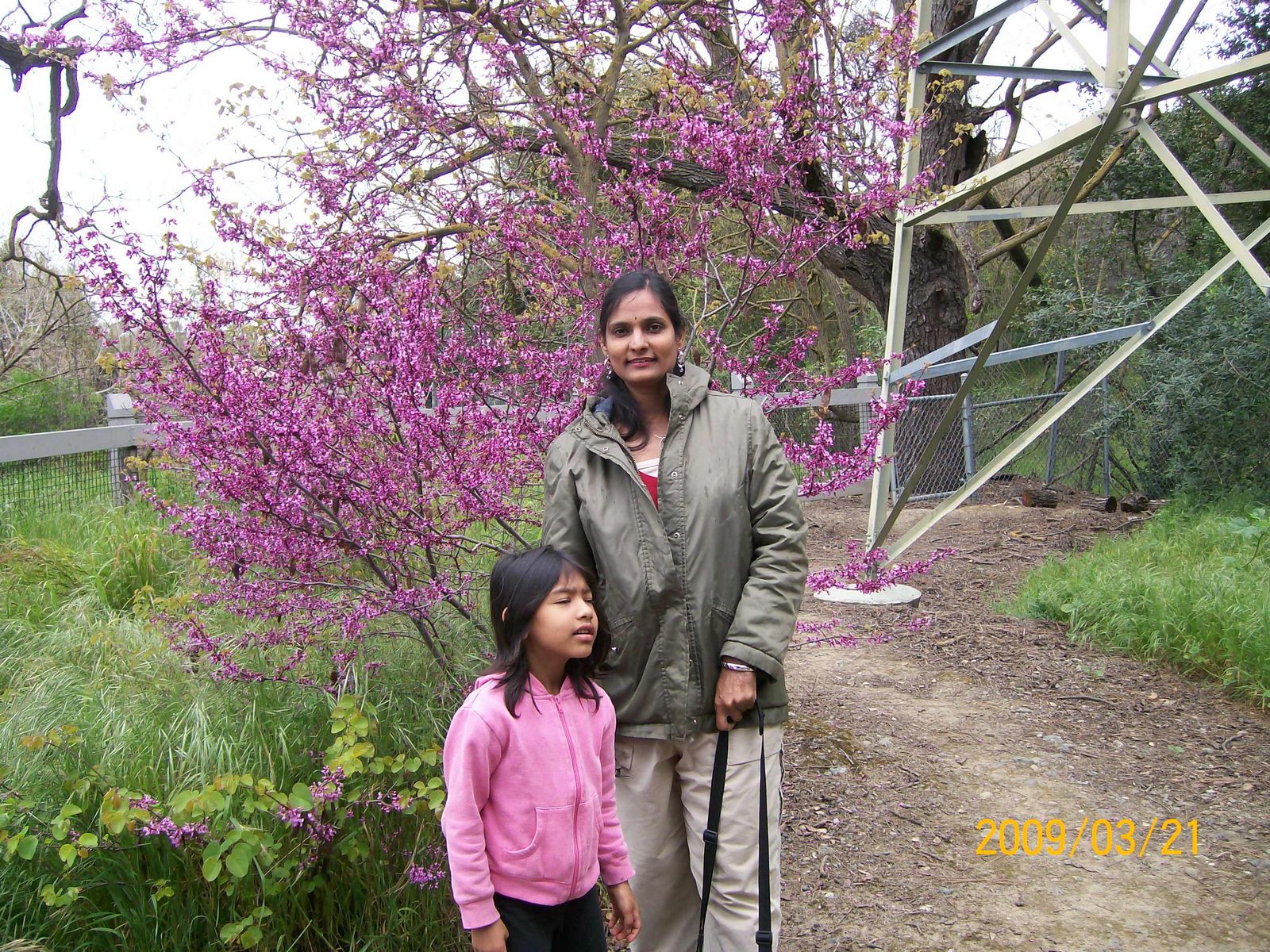 America Through my eyes –Mountain View

Without talking about our native village, whatever we say, some deficiency haunts. But it is a place worth to visit also. So, let me talk about my village Mountain View. Satya arrived here 45 days prior to my coming. After his departure how many times I viewed this Mountain View in google maps is uncountable. As soon as I come here, when Satya was about to say something regarding his office, I immediately said, ‘’Yes your office is at Dead End road”

I learn by heart all the roads nearby. But watching them from above is different to see them directly coming here.

With vivid flowering plants everywhere, with broad and wide streets, Mountain View is a beautiful place. As I said before, the name came to this place as mountains are seen wherever you watch. Mountain View is a village In Santa Clara of north California. Mountain View is a village in Santa Clara Valley, called as Silicon Valley, at ten miles from the main city San Jose, at a distance of forty miles from world renowned city. Compared to other places in America, Silicon Valley is a densely populated area (not like India). And it is equally a costly place also. Cost of living is very high.

We can see to the south of us Altos Hills always with dark green smiles, on the north intruding in the blue sea, on the other side Milpitas hills. NASA research center is on a side of the Bay. Nothing but very huge constructions like iron Igloos, flights landed there to commute, are seen outside, and it appears as a great secret. My home lies on the way to this research center at half a mile distance. Palo Alto on the west and Sunny Vale on the right are the villages of Mountain view. As everything is liked and the weather was comfortable, we reside at mountain view. We changed two houses since we arrived here. This is the third home. The First home was at the end of west and the second, at the end of the east. Now, this third one is at north. So, all the areas in the city are well acquainted. Not only that as I have the inquisitiveness to see and know everything I go around and watch all the areas.

The next day of my arrival, Satya wanted to show me the village and took me to Mountain View Walmart complex, Rengstorff Park at walkable distance and Library. Though I visited them more than a hundred times by now, still I remember that day, holding his hand and shivering due to the cold, watching around in amazement.

Clean roads, as soon as we enter home, soft carpets, glistening warm sunlight all these are unusual first memories of America.

The year I came here was warmer than these four years. I mean we can roam outside without a sweater. Every weekend we used to spend outside.

Morning cooking something and packing it, we used to spend the day in a park till the evening. We purchased a small tent also. (Now we do open air barbeques). All of us together playing disc, leaning one to other reading books, watching trees and other things walking in the park are the things we liked so much. Here in winter we should confine to homes only. So, in warmer days when people roam around in sunlight, we feel nobody stays home at weekends here.

In America the meaning of California is Sunshine. Compared to other places throughout the year here we can see balanced atmosphere they say. It is true.

The weather in Mountain View through out the year remains cool.

Hardly we have a week in a year hot sunny day. That too only one year we had the sultry sunlight. The trees changing the colors of their clothes whenever the season changes appear so splendid. Many people as soon as they mention Mountain View talk about Shoreline. On Shoreline Boulevard ( Varu used to call it Shoreline Balevadu, we still call it the same) if we go to the edge on south Shoreline Park, and lake will come. Through the gate by the time we go in, right side a place to fly kites (my kids favorite place) and on the left Golf court are seen. By the time we reach there as if we are on a high mountain of hay nothing, we could see but for the sky in front of us. With 12 rooms, constructed in 4000 Square feet, this palace feasts the eyes with Victorian and Italian architecture. Three days in a week they allow the visitors.

Costly weddings, feasts, art exhibitions take place here. Rengstorff as an ordinary labor to America around 1850, became a landlord to hundreds of acres of land in the surroundings of Mountain View it seems.

Now being the costliest places, all these were once his fruit orchards and crop lands of him. He provided his invaluable service and economic support to the construction of schools in the village and their development. In his memory this village has a Road and a big park on his name.

If we go further, cool, clean and extensive Salt Lake constructed by man, in 50 acres invites us. From the nearby canal of the sea they fill it now and then it seems. Many people come for touring to see this lake surrounding of the lake, almost a mile and a half perimeter.  Walking and cycling some, some others enjoying boating, here and there with friends and relatives in groups enjoying the feasts and parties some others are seen here. It is very difficult to get a parking on holidays. This lake a temporary camp of migrating birds also. Always water ducks’ sounds are heard with low din of waves. To roam in in the lake almost 30 feet depth though we have to spend more than 17 dollars each, we feel it as a magnificent experience. When other look at the water I watch the sky in the water. Flashing sunlight, the clouds that glow in water and vanish, along with the running boat competing sky and the white foam as if churned it, many strange scenes we could see.

Google office is just at a visible distance. Not only that, main offices of worldwide companies like Symantec are in Mountain view. The first ever semiconductor company in Silicon Valley was established here only. Then Apple, Facebook companies are in nearby villages.

The bicycle trail, adjacent to Stevenson Creek, divides Mountain View from North to South. Listening the sounds of the creek adjacent to the trail, and the sounds of cars on the freeways heard as roar of a sea running and cycling on the narrow footpath lanes, many were seen every day. It used to take for us two hours if we start walking from one side and to reach home. If it is a bicycle it takes an hour from one corner to the other corner. Variety of wild vines on the sides of the road, colorful flowers amid the knotted twines of vines and tender rays passing through the dark leaves here and there wild fruits looking like cherries, above all the things we share, when we had a fight the traces of silence standing as a wall between us everything are treasured here. Varu loves the trail so much. When we are ready to go, she too used to be ready. After cycling for a while, in the beginning we had to carry her and the cycle also. Now, she goes earlier and returns home before us. The water ponds at the end of the north end are the homes of pelicans and flamingos. With permission a few days in year hunting and fishing can be done. Whenever Varu goes on the edges where the dust raises leaving her slippers, she smears her body with dust as if coloring. Such chance is not available anywhere here. When we watch it, my village in my childhood, even though elders abstained us, we people walking around the pond comes to mind. But here water will be so cool we dare not to step in at all. This thing alone makes us disappointed. We feel, when we can not hold it in the cup of palms and keep our legs a while in water what is the use of such a stream?

Nearby from here, many places worth visiting are there. As it is exactly in the middle of California, it is convenient to travel entire state easily. Cupertino, Fremont and such places where many Indian communities reside are just ten to fifteen miles away only.

Once when we tried to stay in San Francisco and searched for an economy hotel on internet we got the result in Mountain View. So, here we can stay and visit the near by places.

We have Indian supermarket in our village so, we never felt any difficulty in cooking food. But a bit costly, that’s all. But where we can get at cheaper rates and the best quality can be known easily if we investigate. By searching four days. we have more than half a dozen Indian restaurants. If we wish to have some variety food, it is not much difficult to go to Santa Clara or Sunny Vale. Unless we wish our own things, for other variety of vegetables and nonveg specials famous in supermarket chains are – Safe way, Lucky are there. If we want medicines, we should go to a pharmacy that appears like a supermarket, but at every mile we have a liquor shop. This village, with nearly 80000 population, has two high schools, two middle schools seven elementary schools. All are government schools. Some private school we have here and there. But government schools have good facilities, quality and standard. Moreover, kinder Garten to 12th class no fee at all. Books too they provide free. More than 90 % of people tend to Government schools that run with high standards.