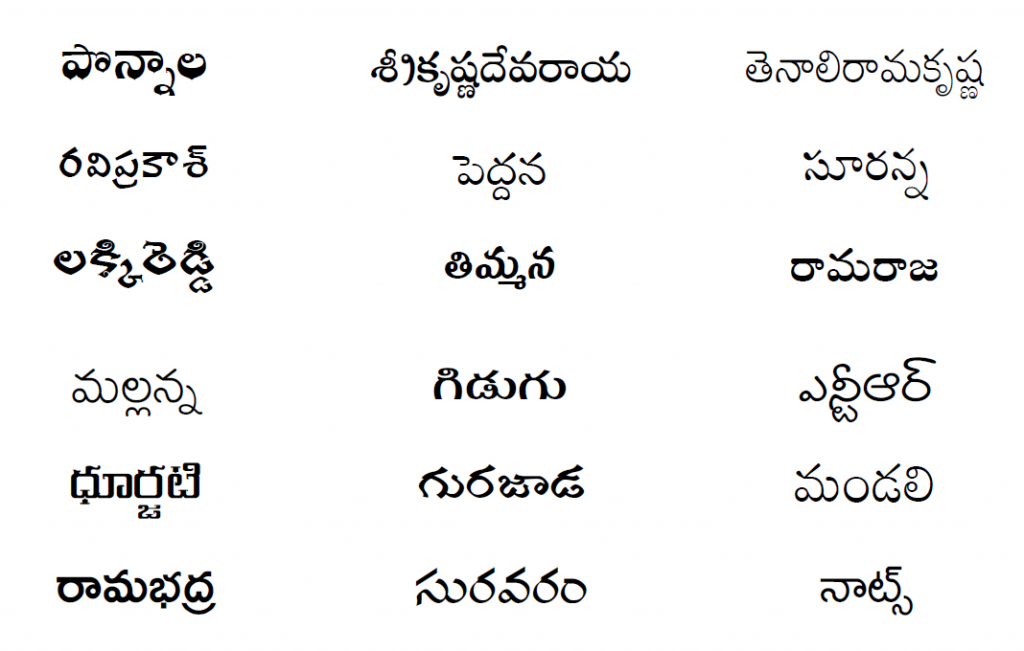 Before learning about the types of Telugu fonts, let’s see what the actual “font” is.

“Font” is a style of writing. For example, from the 80’s, Bapu Hand writing style was the most famous style of handwriting.

However, the effort behind making the handwriting as a “font” is not simple. It is not feasible with simple typesetting.

In order to introduce handwriting to the computer-understood terminology, the Unicode code, as stated in the Unicode section, must be added to each symbolic code. That means “mapping” the right way. With the help of a Unicode script processor, these mapped characters are identified in the form of syllables. The syllables should be identified with glyphs with the help of OTL Service. Finally, you need to make keyboard mapping too.

“Pothana font” is the first font in the history of Telugu fonts.

“When Mr Desikachari published his classic epic “Hanumappa Nayakudu” in 1985, inorder to escape the rigorous process of proofread the printing mistakes and publish his own classics, he composed beautiful Telugu font on the Macintosh machine with a lot of difficulties. He named the font “Pothana” after Bammera Pothana, his famous poet from the 16th century and Author of Andhra Bhagavatham. The next font was named as “Vemana”.

They were first compiled into bit-mapping fonts in the 1990s, and later in 1993 as postscript fonts. Using these fonts, he designed the portable keyboard for typing Telugu and wrote the software himself. Most of the first-generation Telugu people in the US used to write in Telugu on computer.

In 1995, with the help of Dr Jampala Chowdhury’s initiative, TANA agreed to keep the font in the public domain. Until 1994, public domain software RIT relied on fragmentary fonts. In 1995, Mr Ramana Juvvadi, who made a number of changes to the ISO standards for branded fonts, released them into the public domain in 1995 along with RIT 3.0 under the name Fonts Exchange.

Later, Mr Chodavarapu Prasad along with Mr Ramana Juvvadi, made some changes to these fonts to suit the use of the web.

In addition, Rachana, Anu, Vision, LEAP Office software made by C-DAC was also available in India in those days. All these were Telugu software efforts that took place before the web became so popular”. (Suresh Kolichala, Eemata)

Here are some popular fonts and availability details: – Here I am trying to help you find the technical story hidden behind the beautiful fonts and letters with the help of the articles “Creating Unicode Compatible OpenType Telugu Fonts” by Thirumalakrishna Desikacharyulu’s paper and  “Microsoft Developing OpenType Fonts for Telugu Script”.

As explained in the previous chapter “Unicode”, to introduce handwriting into computer-defined terminology, the Unicode number for each symbol must be defined with the respective language characters.

An application such as Word receives this keyboard input and lays out text in proper format with the help of the Unicode Script Processor , which comes with the operating system. This processor, called “Uniscribe” in short, contains APIs that facilitate applications in formatting complex scripts. Uniscribe has multiple “shaping” engines, which know how to layout multiple complex scripts.

An OpenType font is an extended version of a TrueType font, which may contain one or more additional tables to handle features such as contextual glyph substitutions, relative glyph positioning, kerning etc. This engine frees the client applications from handling complexities of script rendering, such as applying contextual glyph substitutions, relative glyph positioning etc. Thus the applications work at the level of features and characters, with which they are already familiar, and let OTL Services handle the details of lookup tables, glyph Ids, which are built into the font.

The Telugu shaping engine works on a Telugu Unicode character string in the following stages:

First the shaping Engine identifies the boundaries of syllables and isolates certain parts. It does this to be able to place syllable elements in required positions and to determine if combining elements have to be preferentially replaced by graphically distinct forms, such as the Creating Unicode Compatible OpenType Telugu Fonts  syllable kssa (K ). Then the base consonant, which is displayed in full form, is found, and all other elements are classified by their position relative to this base. These other elements could be pre-base (non-existent in Telugu), below-base (quite common), above-base (quite common) and post-base (quite common). The shaping engine splits the matras that occur on more than one side of the base consonant into their constituents.

The following three examples illustrate how Uniscribe splits AI matra into its above-base and below base components and rearranges the initial phonetic sequence of characters. It is this reordered sequence that is formatted by OTL services using the lookup tables built into an OpenType Telugu font.

It is important define Below base (Vattulu), Above base (Talakattu, Dirghamu etc..) and Post base markers (Kommu etc..), the natural writing methods of Telugu. If the frame is made, the fonts will not be made. OTL Services (OpenType Shaping Engine) also help to ensure that the font length, width, thickness and shape are correct when creating a new font.

Though it is very difficult to make a font, it is no exaggeration to say that we have over 300 Telugu fonts available online for free now.