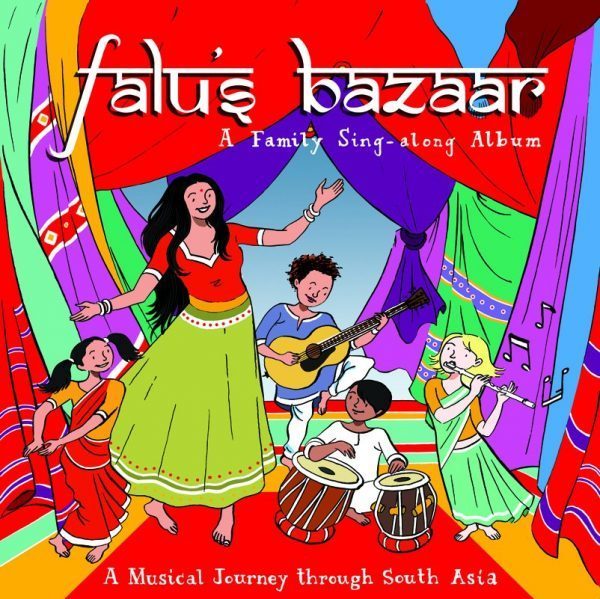 Talent has no boundaries and it flourishes on its own, wherever it lands. It rightly describes the remarkable journey of Falguni Shah, the only Indian nominated for the 61st Annual Grammy Awards 2018. Bewildered at the turn of the events, Falguni is still in search of words to express her joy and embrace the success that has come her way.

“I was completely shocked when I heard about the nominations at the Grammys. The album was a creation out of a mother’s love for her child and I never expected it to reach such heights,” said Falguni Shah, who has her album, Falu’s Bazaar nominated for the Best Children’s album category at the Grammys, which will be held on February 10, 2019.

Unlike other conventional albums made for children, what makes Falu’s Bazaar unique is the wonderful compositional quality and distinct thought process that went into its creation. It was the inquisitiveness of a four year old Indian-American boy to know about his own cultural roots, differences in language, foods and spices that led to this album.

“My son always had these interesting questions about how we Indians spoke different languages at home, how our food smelt different and why our curries were yellow in color. So, I just wanted to give him a sense of identity and to tell him about our beautiful culture. It was very important for me to make him aware that being different is nothing to be ashamed of. On the other hand I feel that we should actually be proud of our incredible heritage. And I found music as the best option to communicate my thoughts to him,” adds Falguni. She moved to America in 2000 and has been actively involved in the music industry since then.

Addressing the concerns of her four year old son, Falguni compiled the songs in the form of different stories that would educate as well as engage the kids. Not just in English, the album has songs in Hindi and Gujarati as well. The album unfolds the story of a mother-son duo, who visit the Bazaar and each song represents the various entities and incidents that they witness during the journey to and fro from the market.

The album Falu’s Bazaar starts off with a song sung by her son Nishaad where he recites his name, age and address in Hindi. Following this, there are songs on how to cross the road and about the different shapes of the traffic lights. It continues with a song that portrays American diversity and includes the word ‘hello’ in five different languages including Chinese, Japanese, Spanish, Hindi and English. But, it is the song about the rainbow, that stands apart as the singer’s favorite.

“Classical music is my muse and hence I have tried to include the different rhythms in one of the songs that describes the rainbow, colors and numbers. I feel it’s essential for kids to know about taals and how music is part of everything around them. Music is universal and it has the power to connect amidst diversity and it’s a great medium to communicate too,” added the singer.

The album has also included fascinating details about how pots and pans are called kadai  and belan in Hindi, how different spices are used to cook Indian food with their names being jeera, haldi, etc. It even includes a song that names all the tropical Indian fruits and vegetables that kids growing up in America are unaware of.

“Through each and every song I have tried to make the kids understand about the unique aspects of Indian culture. And it feels great to get reviews from other parents that these songs really helped them in making their kids learn Indian languages. I have also included an activity book which can be downloaded for free along with the album that describes the story and helps kids to learn each and every word both in English and Hindi,” said the Grammy award nominee.

Adding a personal touch to the album, Falguni has also included a lullaby sung in Gujarati by her mother, Kishori Dalal, which has been passed on from one generation to another in the family. With a total of 10 songs, the album familiarizes kids with knowledge on languages, diversity and culture through the medium of music. Produced by Danny Blume and Deep Singh, the album is composed by Falguni Shah with Bryan Vargas being the lyricist. Other singers include her students – Saara and Lekha Wood, and husband Gaurav Shah, who is also one of the musicians for the album along with Bryan Vargas, Deep Singh, Soumya Chatterjee and Danny Blume.

Unique themes for albums has always been Falguni’s forte, who believes that music should invariably have a meaning and enrich others. Her previous album Foras Road was inspired by the stories of women belonging to the infamous red-light area in Mumbai’s Foras Road. The amazing singer has also recorded and performed alongside a wide array of famous artists including Ricky Martin, Wyclef Jean, Blues Traveler and she has also performed a duet with A R Rahman at the Time Gala Event in front of the Obamas and Oprah Winfrey.

Though many accolades have come her way now, her journey was not easy when she entered the music industry here in 2000. Having learnt music since the age of three under eminent gurus Kaumudi Munshi, Uday Mazumdar, Ustad Sultan Khan, and Kishori Amonkar, Falguni was keen on making her career in music and it was always a matter of working twice as hard to catch up with musicians here in America.

“I was in the minority and it was a culture shock. Everything was different, the way we learnt, the memorization and even the work ethic. I had to learn the American way while holding on to everything that I learnt in India. It was a struggle with lots of rejections but I have learnt from my mistakes. As is rightly said, pursuing music – it is all about the journey and not the destination,” affirmed Falguni.

Her experiences are also one of the prime reasons behind the inception of Falu’s Bazaar, through which she wants to give an identity to her son so that he can draw the best from both cultures – one which is ancient and rich in heritage and other that is very modern and driven by technology.

“My wish is that my son maintains his incredible Indian cultural identity while learning to assimilate into American society. He should learn about both the cultures and should be proud of his Indian roots,” added Falguni.

(Thanks to India Currents-)