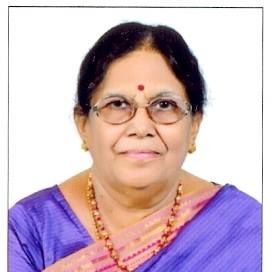 “Let us go on a tour for a month” Sarojini said adjusting the string of jasmines in her hair.
“You go” slipping his spectacles on to the nose Ramam said.
Son and daughter invite them to their homes but Ramam says it’s not possible for him to go somewhere.
“We are going to our children, not anywhere else” Sarojini says.
“Ok. You go have I objected you?” Ramam said.
“You know I can’t go leaving you alone. That is your cunningness” his wife Sarojini said.
Sarojoni is very talkative, greets and treats every one with her jubilant nature. She is a great connoisseur in extending the conversation. When she was praised by the Neighbors for her skill stating “Aunty, you are very social” or “sister you are the jostle of the group” she feels happy. She says that talking to all with a smile is dear to her and she doesn’t like the serious attitude.
Sarojini inquires the troubles of one and all, including the servant maid, vegetable vender and milk man. Though Ramam is a bit conserved he enjoys her talk while eating. He feels proud within for her hostess quality of cooking and serving the guests happily.
“What?” Ramam went on going through the paper.
“What is this? When I said let us go and see our son and daughter?”
“It’s ok” Ramam agreed.
Sarojini’s face glistened with happiness.
**********

As soon as they entered their daughter’s home their grandson greeted them starting his scooter.
“Hi grand ma and grand pa “
Breakfast and lunch as usual went on. Everywhere silence alone ruled.
Son in law will not return before eight in the night from the bank. At least daughter used to be garrulous like mother, but now she too minimized her talk.
What might be the reason?
After dinner she said, “Mom you use this room. I’ll ask bobby to sleep in mine.” She said.
After that taking a book she went into her room.
“The boy went in the morning, still he hasn’t returned?” worriedly Sarijini asked her daughter.
“Wit in an hour he will come, don’t you worry. He should attend the tuition after the college” she said coolly giving her the snacks plate.
Sunday he remained at home. Father in law and son in law had a talk about politics for a while.
“Bobby, come here.” Sarojini called her grandson. He came and sat by her side.
“You are working hard so much, day and night. Is there any hope of getting a state rank?” she inquired.
He chuckled and said, “ I am afraid, whether I could be qualified in the entrance or not?”
“Why? Your mother is spending so much for tuitions and struggling for you?”
Bobby was vexed by that time and tried to go in.
“Sit, what about your second language? Is it telugu?” she asked.
“It’s Hindi” he replied.
“What is this without going for your mother tongue?”
Luckily his cell rang. With that pretext he came out from that room.
**********
“What’s this mummy? Grand ma is so boring. So many queries she puts? How much she talks, my God!”
Sudha said in a low voice, “I too used to talk more than that. Your father made me shut my mouth. He is reserved and talks less. He likes me too that way. Now even if I want, I couldn’t get the words” she sighed.
Bobby was not there.
*********
Sarojini was impatient. Do we need only this breakfast and food? She never squats by my side and talks. Never says when her husband gets a promotion. At least never asks whether the food is good or not. Never asks to come to a temple. Why did she change so much? Whether he likes our coming here or not? Probably she can’t convey that to us. So that’s why she might be reserved.
Sarojini’s mind stained at this thought. She felt irritated at Sudha.
“Let us go to our son tomorrow” she said.
“You planned for fifteen days. Not even a week completed” Ramam laughed.
************
Son and daughter in law came to station to receive them. Driver kept their luggage in the car.
“Have you taken leave for us? We can come know” she said to her son.
“Today we had a holiday” Murali said.
As soon as the car stopped at the gate the servant maid took the luggage inside.
“Aunty, this is your room. This is AC switch. Remote control is there. You can watch serials happily. Uncle, I brought English magazines for you. Ash-tray is here”
When Shanti, their daughter in law explained Sarojini felt very happy.
“How she arranged all these for us” she said to Ramam, who was watching the TV
“This is their guest room” Ramam smiled.
“What do you mean?”
“Let them be guests or relatives, whoever comes to their house, they give this room”
“Are we the guests now?” her face at once turned pale.
*****
Ramam was turning the pages of the books.
Shanti was seated in front of the computer. Granddaughter went to her friend’s home. Her son was talking to someone on phone.
Sarojini felt bored and went into the kitchen.
The cook was busy doing her work.
“Let me cook brinjal today. My son likes it” she said.
The cook remained silent paying no heed to her, went on doing her work. Meanwhile Shanti came in hurriedly.
“Aunty, don’t disturb her. She is too busy to spare a minute. She will not talk to anyone.” Shanty said in an irritated manner.
“My son…….” Sarojini tried to say something.
“Please, go out aunty. There is a list of day-wise cooking. Don’t interfere”
Sarojini was shocked to her words and retreated into the room.
The cook never talks. The servant maid never talks.
This looks strange! Though worried she never exposed.
Two days passed..
Silence…Sarojini couldn’t bear it. Daughter in law never talks in a pleasant mood. Granddaughter never comes close to her. Son, when at home always remains on the phone… can’t they talk to me. Tears welled up in Sarojini’s eyes.
For lunch or dinner too she says
“You and uncle have the food, we‘ll eat later.” She says.
Where is the fault? Talk alone gives the strength and life to humans.

When the calling bell sounded Sarojini went and opened the door. A wife and a husband with four year child were there. Friend’s of Shanti.
Sarojini felt happy to see people. Shanti came out from inside, Sarojini too sat there in sofa and went on talking to them asking their native place and other details.
Shanti couldn’t tolerate it.
“Come, let us sit in my room” she took them into her room. Sarojini moved to hers.
“See, that girl belongs too Vijayawada, the child is so cute” she said to her husband.
Ramam, staring at the door couldn’t turn his gaze. Shanti was standing there.
“It’s not polite to talk to whoever comes home. I didn’t like it you should stay in your room” Shanti left the place angrily.
Sarojini couldn’t understand what her fault was. She should not talk to others. She secretly wiped her tears.
What is this not talking? She couldn’t get the idea behind it. How much happiness is there in talking and how much affection?
How soothing it would be if one can talk openly to someone?
Sarojini’s mind got upset.
Not talking, is it a part of new fangled fashions?
Is it the characteristic of the great?
Is it a main point of globalization?
No answer came to her mind. She is not a home maker solely. She is a retired bank employee, taking rest after working for more than twenty years.
Ramam watched everything; he came there to fulfill her desire only.
*********

“Let us go tomorrow” that night Sarojini said to her husband.
Ramam laughed and said
“I’ll not come. I’ll come after a week”
“Ok. You stay. Let me go” her voice turned hoarse.
“Let us go to night itself“. He stroked her cheeks. In her grey hair silver strands laughed.
***********
As soon as Sarojini launched her neighbor Sharada arrived.
“Aunty, today your lunch is at my home” she said. Sarojini felt happy.
“Without you there is no life at all” Radhamma, the next door neighbor said.
“Grandma, daddy took out all the guava to sell. Not even one he has given me” servant maid Rangi’s son complained.
“Leave it, I’ll buy for you. Go and bring the guava” Sarojini kept the money in his hands taking it out from her purse.
Sarojini breathed happily. Jasmines bloomed at the backyard. Rangi plucked the flowers. She made a string of it.
She made it two and offered one to the servant maid.
“Sis, let us go to a movie in the evening, my elder one will buy the tickets” next door Radha came to confirm
“Take for Rangi too, I’ll pay the amount” she said smiling.
Rangi felt elated as she was taking her also to the movie.
Ramam, standing at the compound wall was talking politics to the neighbor.
“Come and have hot hot coffee amid your talk, come in brother” she invited them keeping the coffee cups on the tea table.
Sunday evening Sharada and Sarojini were playing chess at Sarojini’s home. Ramam went to club. After a tete-a-tete Sharada asked, “You people went so far, can’t you stay there a month, you never go leaving the home “
Sarojini chuckled.
“We can’t stay in that silent heaven. Everything is there at home. How can it be if no one talks to no one? Do we need only food/ that food is here too. I can’t bear that silence. So we can’t stay there. I thought I’ll forget the words” sarojini replied with a laugh.