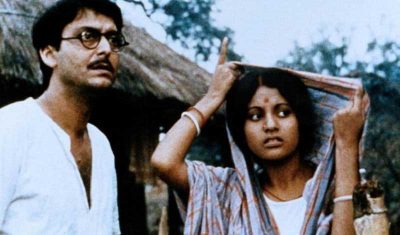 2.5 to 3 million (5% of the population) died in the great famine of Bengal due to starvation in one of the worst man-made disaster of 20th century.

Ashani Sanket was a film directed by Satyajit Ray based on the novel written by Bibhutibhushan Bandopadhyay. It received the Golden Bear at the Venice film festival where it premiered in 1973. I watched this film on Indian National television for the first time. The imagery stayed with me for a very long time.

Satyajit Ray is a director that needs no introduction to any film fan. He is probably the most famous film maker India has produced. While a lot of films get exhibited often, not Ashani Sanket.  This is the first color film made by Ray.

This film is based on a novel by Bibhutibhushan Bandopadhyay by the same name. Ray’s Apu trilogy was also based on Bibhutibushan Bandopadhayay novels. His novels depicted the rural life of Bengal in the first half of 20th century. A few of his novels have been translated, and are available on Amazon. I strongly recommend his works if you haven’t already read them. Some of his other novels were adapted to the screen in both Hindi and Bengali.

The film is set in the times of the Bengal famine of 1943. Rice is the staple food of people of Bengal. The population of Bengal increased during the first half of 20th century, but the agricultural yield has not. After Japan occupied Burma (now Myanmar), the import of rice from Burma stopped. Many Indians in Burma left for India. Allied forces retreated to Bengal as well. Railway transport was disrupted due to the war and also the India’s independence movement of that time. A lot of farmers were forced to sell the land to build air strips for British and American forces. They migrated to cities to find work. Industries were asked to sell to military for lower prices, and the industries sold their merchandise to the locals at very high prices. The colonial government prioritized distribution and diverted food supplies to industrial workers and the military from the rural areas. The British war government refused aid, this led to extremely high prices and starvation.

The film begins with images of lush green Bengal. Gangacharan Chakraborty has just moved to the village with his wife Ananga. He is the only brahmin in the village, he knows a bit of ayurvedic medicine. He opens a school for kids, acts as a priest and doctor to treat the small ailments of the people. His wife Ananga is a person with a golden heart and is friendly with the neighbors. People in the village are fascinated by war planes flying in the sky. Little do they know what is in store for them. Gangacharan is a shrewd person. He can manipulate people to his advantage. But he is not a bad person either. He is willing to share and help people.

Slowly things start go worse for the people of the village with the price of rice slowly going up. The village head assures people that he has enough rice to sell. But hoarding and looting begins  as supplies dwindle and people start to go hungry. This affects Gangacharan and Ananga and their friends as well. Food is hard to come by and people start dying. The price of rice starts going up and up. People are willing to do anything to survive and not stay hungry. The film ends with a sad yet on a positive note by Gangacharan accepting people to his house.

Even though this film has political undertones, it has only a little bit of history and it doesn’t go deep into it. The people in the village are enamored by the airplanes. But little do they know that people are losing lands for them, or that the war will wreak a havoc on their lives. There is a little talk about the war and occupation of Burma. There is also a small statement about rice going to the army and keeping people hungry. It is just as much political as the film gets.

The film mostly about the characters and the choices they make to survive. Gangacharan who wants to live off the villagers, is also willing to help. When a poor old priest approaches him, he is willing to part with some of his rice. In the final scene he is willing to accept the old priest along with his family of 8 and also perform cremation for a friend of his wife who is from a lower caste. (While the cremation part may not seem generous to people these days, this is the story of 1943 and it was rare those days).

Ananga is sweet person, starts working in a rice mill to make life easier, and goes looking for roots to cook with her friends when no rice is available. She is a survivor. When the poor priest visits their home, she feeds him and asks her husband to let him stay overnight and feeds him dinner. All this when rice is difficult to come by. Ananga’s friend Chutki is ready to have an extra-marital affair with a physically deformed person, so that she doesn’t have to starve. Famine is tough on people’s lives. But they some how survive. Those who cannot, perish.

Soumitra Chatterjee a Ray regular who played Gangacharan is one the finest actors Indian cinema has to offer. His ability to get into the character is amazing to say the least. He is as fantastic as ever! Bangladeshi actress Bobita played Ananga was very good as well.  So is Sandhya Roy who played Chutki.

Soumendu Roy was the cinematographer for this film. It is fabulously shot. The locale is lush green and beautiful, which is a bit unsettling for a film with a backdrop of starvation. It also a metaphor for a famine that is man-made. The film is made in Italian neo-realistic style in natural surroundings and with many non-professional actors playing small roles.

The film is also scored by Satyajit Ray. The background score is very good!

Watch the film to peek into life of Bengal during 1943 famine. It is also a story about survival and heartbreaks.