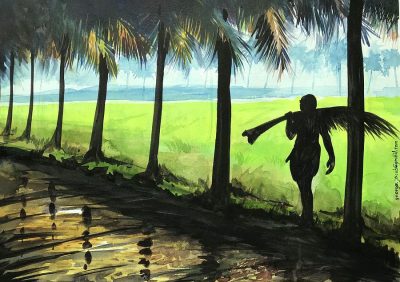 Mulpuru is considered a big village with planned houses and roads. A few houses of rich people are spacious; almost all houses have tiled roofs though here and there we find thatched roofs too.

We have two small lakes on either side of the village. There are three temples- Vishnu, Shiva and Bolamma, the village deity, whose temple was  a few yards  from our house. It is a red stone temple.  We children used to run around it playfully. In the Vishnu temple an annual five-day festive used to take place every year with music, dance and other activities.  My mother used to dress me, adorn me with jewelry and send me to the temple along with other playmates. My sisters never came there though.

We heard from others that my mother had a lot of jewelry in gold- hundreds of tholas. My father sold her gold without her knowledge to help a friend to start some business. My mother came to know of it much later. But she never blamed my father though what he did was not right.

The most beautiful place in our village is it’s library building. Those who did not buy news papers used to go there to read them.  Most of the book cases and the books there were donated by my father. I used to go there early morning to pick up some flowers from that building. Once while climbing the gate, I tore my blue flowered new frock, I still remember it very well.

Our village is surrounded by wet lands and mango groves. Every morning one can hear the sound of bells from bullock’s necks, when they were taken to the fields for work. It was like music and the,  harvest season was the most beautiful season there. During  ‘Sankranthi’  festival season each house front is decorated with ‘Rangoli’.  My sisters used to put ‘Rangoli’ in the late night with the help of kerosene lamps because they did not want to be seen by others in the morning doing it.

2.The people of my village

Justice Avula Sambasiva Rao and his mother Ms. Bapamma  were the richest people in Mulpuru. But they were very humble and respectful to people, and that is why the whole family earned the esteem of the villagers.

He was closely associated with the Humanist and Rationalist movement. He served as the Chief Justice of A.P. High Court and also as the Vice- Chancellor of Andhra University.  My father was very close to him, they were like brothers. Hence we called him ‘Babayi’ (younger uncle.). I closely know his youngest daughter, Manjulatha, as a student, as the Director of Telugu Academy and as the Vice- Chancellor of Telugu University, Hyderabad.

He was a gem of a person in his family, an intellectual giant, a writer and an orator. He practiced law in Tenali. He was a Humanist and Rationalist. His untimely death left a blow to all of us in the village.

He was London trained and served as the military doctor. He was a strict disciplinarian and cared for personal and patient hygiene. He was a great friend of my father though, I met him only once in my house. He was handsome and dignified.

He was the village post master. He was very gentle and soft spoken, a good friend of my father. I still remember him vividly, as fair and short.

He was known as Kamma –Brahmin. He was the priest of the village, performing all kinds of rituals and pujas in non- Brahmin families.  He used to  jokes and make us laugh. He was  a good man by nature.

She was our washer –woman dark and big build and – very affectionate. She washed our clothes cleanly and folded them for us. We used to tease her, but she never took offense and loved us as we were. My mother used to give her hot dinner every night but she didn’t eat along with us. She took it home to share it with her grand children (Her adopted son’s kids.), She is an unforgettable woman.

She was in charge of pounding paddy for our rice, preparing pulses, cleaning the house on festival occasions. She was straight and slim, and it was difficult to guess how old she was. She was a quiet and sincere worker. Her beautiful daughters also came to our house to help in domestic chores.

He was the head of all our agricultural laborers. He took care of agricultural cattle and tools. We cried a lot when he died of typhoid. Those days,  medicines were not available for typhoid.

He was a fair and hefty person, very dignified and always looked neat. He was a friend of our Peda Mamayya. But he was present in our house on all important occasions, marriages, and other major functions and parties. He was in-charge of supervising cooking, serving, attending on guests and so many other things. We could rely on him for any work. He was so very trust worthy.

She was the sweet maker. A small person with hoarse voice, very clean in her work and very strict in her business. She used to come home with her staff to prepare sweets on large scale for the marriages of my sisters and brother,  weddings that were lavish and pompous.

Venkayamma was my mother’s childhood best friend. She used to sing and tell us stories. She was very helpful to my mother. If we were sick she used to stay at our bedside and when Vimalakka delivered her kids,  she was a great help to us. Those days children were born at home with the help of a village mid-wife.

They were very friendly and loving people. They respected my parents and were always ready to help my mother on important occasions. They used to gather in our house after their men went to sleep and spend time with my mother who never stepped out of her house. They used to bring her all the village news. They used to joke and laugh, they had the best time away from their domestic chores. Though sleepy I used to sit on my mother’s lap listening to them.

My friends Swarajyam, Prameela (the village Munsiff’s  daughter) Padmavathy, Nagendram and Hima Sailavathy, I still remember how  we played together, gossiped, and how we enjoyed those innocent childhood days.

Thus life in our village is memorable. I pay my respects to all the people I mentioned.