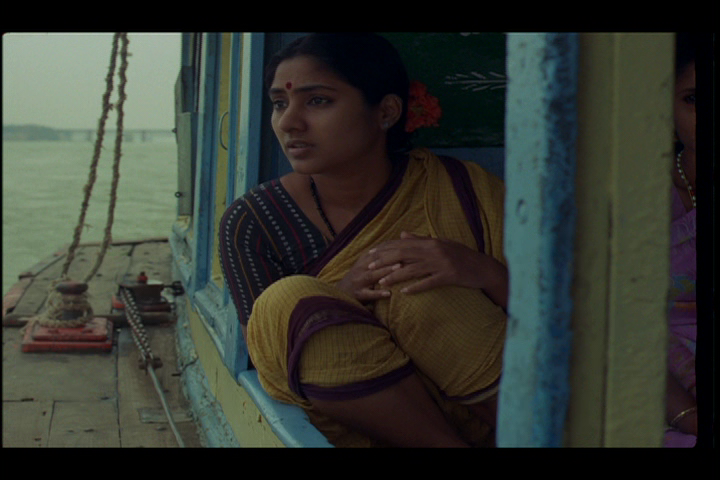 “That night was filled by immeasurable softness and enormous femininity. In that hug I fondly remembered the tragic stories; the stories of feminine nature that soothed and nurtured men.”

Sthree was made in 1995 by K.S. Sethumadhavan based on the short story “Padava Prayanam” ( పడవ ప్రయాణం, Boat Journey) by the writer Palagummi Padmaraju. Sthree won the National Award for the best Telugu film in 1995. Rohini the actress who played Rangi won the National award Best Actress: special mention.

Sethumadhavan has made some excellent films in Malayalam and Tamil. I have watched his films Oppol (Malayalam) and Maruppam (Tamil). His most well-known film is the Hindi film Julie which is a remake of his own “Chattakari”. Sthree appears to be his last film.

Telugu literature lovers need no introduction to Palagummi Padmaraju. His short story “Cyclone” (గాలివాన) won the 2nd prize at the World Short Story Contest held by the New York Herald Tribune in 1952. He wrote a lot of short stories and some novels. He also has done some credited, and a lot of uncredited work in films.  The characters in his stories were as real as they come. He himself wrote once that he was incapable of creating imaginary characters.

This film is about how woman internalize domestic violence. I first watched this film on DD, the national government run channel, when it was screened as part of the Sunday afternoon art films. This film is so powerful that, It has stayed with me till now.

Plot of the story is as follows. A feisty woman, named Rangi has a partner, Paddalu who is an out of work theater actor. He becomes a thief to fend for himself. He keeps going to prison and has another lover.  One day Paddalu persuades Rangi to help him steal from a boat. Their relationship and what happens on the boat form the story.

While the film is mostly true to the short story, there are some differences. In the film, the protagonist Rangi doesn’t want to steal. Whereas in the short story, she is a regular accomplice. The partner of Rangi named Paddalu has no redeeming qualities whatsoever in the short story, but in the film he is a good stage actor, and a victim of circumstances to an extent. The film also has a few scenes about the declining patronage for arts and the old way of life. The Short story all about what happens on the boat and nothing else. The 10 page short story was well expanded into an hour and half film.

Performances in this film are exquisite. One thing that should be told about Rohini who played Rangi is, she grew up on the screen. She acted in a lot of films as a child artist. Apparently she did some lead roles in Malayalam films, but she had none except this film in Telugu. I find it  kind of shameful. She is a fabulous actress! In this film, She nailed the body language and the accent. She has such an expressive face. It breaks your heart whenever she says “ఆడు నావోడండీ” (He is mine). Vijay who played Paddalu was also excellent.

Camera work by Saravanan was exceptional. It captures the beauty of the river Godavari and East Godavari district very well! Music by L. Vidyanathan was very good as well. There is one song in the film which was written by Palagummi Padmaraju, that also appears in the short story.

Last but not the least, the dialogue in film is very good! They used the exact dialogue from the short story where they can. When they needed, they wrote new dialogue. Kudos to P. L. Narayana for this excellent writing!

I recommend the film for the story the heart, the innocence, and also for Rohini. I bet it will stay with you!

Last but not the least, can somebody please write a full length role for Rohini?

Link to the story: http://kathanilayam.com/story/pdf/59526

The film is available on cinemasofindia.com and also in Einthusian.