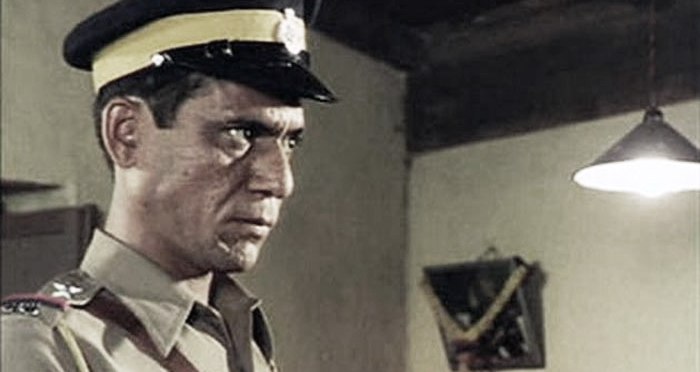 It translates as follows: (Curtesy Wikipedia)

Before entering the circle of deceit,

I would not remember.

After entering the circle of deceit,

(there was) between me and the circle,

only a deathly intimacy

that I never realised.

After leaving the circle of deceit,

even if I am set free,

the design of the circle of deceit,

will hardly be different.

Whether I kill, or die,

Am killed, or kill (the other)

these questions will never be decided.

When a sleeping man

awakes and steps forth,

then the world of dreams

may never be seen again (by him).

In that, the light of Decision,

will everything be level ?

On one tray (of a balance) is Impotence,

and on the other is Manhood,

and exactly at the needle point,

Arth Satya was  the second film made by Govind Nihlani, written by the great playwright Vijay Tendulkar based on a short story by S.D. Panvalkar. The film was released in 1983 is considered one of the pivotal films of Parallel film genre of Hindi film industry. It one of those films that did well at the box-office as well.

Govind Nihalani started his career as a cinematographer in the film Kaadu (Forest) in 1973. He was a cinematographer for a lot of the earlier Shyam Benegal films. He was also part of the camera crew of Richard Attenborough’s Gandhi. His directorial debut was Aakrosh another intense film. He is known for gritty hard hitting realistic films.

Vijay Tendulkar started writing plays when he was 39 years old, with “Shantata! Court Chalu Aahe” based on a short story by Friedrich Dürrenmatt. His other famous works are Sakharam Bindar and Ghanshiram Kotwal. He also wrote screenplays for a lot of Shyam Benegal’s films starting with Ankur. He wrote the screenplay for Nihlani’s earlier film Aakrosh as well.

I dont have any information about S.D. Panvalkar who wrote the story, except that he won a Sahithya Academy Award (a top literary prize in India).

The plot of the film is about a cop called Anand Velankar played by Om Puri. He comes from a family of cops, his father (played by Amrish Puri) is abusive and hits his mother frequently. The film begins at a party where Anand meets Jyotsna Gokhale (played by Smita Patil). They hit it off at the party, as both are bored. Anand is revealed as a teetotaler there. Before going to the party, Anand arrest three goons who belongs to a Don called Rama Shetty (played by Sadashiv Amarpurkar). They release the goons before he arrive at his police station. The police station is run by an officer who is corrupt. Anand is made to do things he doesn’t like to do. That starts his descent into alcoholism and violence. The last scene is brilliant and is in quite a contrast to the opening scene!

The film is about two things, one is repressed anger and the other is the expectations of masculunity. Anand grows up in an abusive household, he thinks it is duty to protect his mother but cannot. While at work he wants to take on people like Rama Shetty, but his higher officials prevent him from doing so. He is always made the scape goat and some one else takes credit for his work. Everything he does challenges his manhood, he says. His drunken episodes take toll on his relationship with a woman he wants to marry.

This brilliant film works in a lot of ways due to the camerawork. It was also shot by Govind Nihalani who is an excellent cinematographer. He used closeups and shadows on the face brilliantly to capture the excellent performances of the cast.

Om Puri has given one of the best performances on the screen of Hindi cinema. His transformation of Anand Velankar is nothing like what was seen before. Most of his acting was through his facial muscles. The way he looks at surroundings and people and clenches is the window to what the character is thinking. He won an award for Best Actor at Karlovy Vary International Film Festival and also the National Award.

This is the second film of the actor Sadashiv Amarpurkar who played Rama Shetty. Sadashiv Amarpurkar by that time was a well respected theater actor. His performance as a rather soft talking villain is great! He conveys a lot through his bloodshot eyes. I was in awe still remember loathing that character when I watched the film the first time many years ago.

Smita Patil as a complex Jyotsna Ghokle, Anand’s love interest is very good. Her backstory is not a part of the film. Her interest in Anand rises and goes down as he descends into alcoholism and violence. She is a treat to watch.

The background score is sparse and is mostly ambient noise. Background score doesn’t even register till the last scene. That gives the film very realistic feel.

Watch the film to understand the nexus of the politics and the police and for one of best performances in Hindi cinema. It will stay with you for a long time!