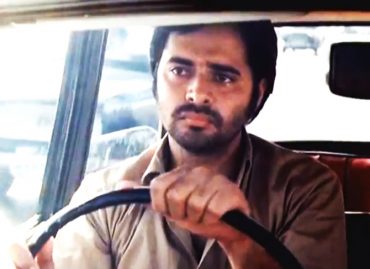 It is estimated that there are 139 million migrant workers are in India. They mostly migrate to cities like Delhi & Mumbai from northern Indian states.

This film is slightly different from my other films. This film has not played at any film festivals. I thought the film is pretty timely because it covers one of the most topical issues in India, the migrant laborers.

This was a debut film of Muzaffar Ali. Muzaffar Ali made only 6 films. His best known and most successful film is Umrao Jaan based on courtesan’s life. He made Anjuman, a film about embroidery workers, and Agaman a film about Sugarcane workers. Other than Jaanisaar, Umrao Jaan and Gaman, his remaining films are not available.

Many people from states of Uttar Pradesh, Bihar and Odisha migrate to different parts of India to find work. They work in construction, agriculture and other sectors. While most people migrate to urban areas, there are many who migrate to rural areas as well. My cousin who is into agriculture told me that it is very difficult to get people to work in agricultural sector in Godavari districts. So, they employ people from the states of Odisha and Bihar.

Life is tough for those migrants. India is a very diverse country, linguistically and culturally. They are not highly educated and can speak only their native language. Most people around them do not speak their language or eat the same food as they do. Because their employment is temporary, they live in makeshift houses out of the town or close to their employment site. This is not a new phenomenon. There were several families who lived on our college campus in makeshift homes, to work on construction of the buildings. This was in early 90’s, when Punjab (the state where I went to study) was not a safe place.

This film is story of migrant workers who migrate to Bombay (now Mumbai) from the North Indian state of Uttar Pradesh. The film opens with a beautiful Thumri in raag Bhairavi by Hira Devi Mishra in a village in Uttar Pradesh.  The shots contain old people and children but none of young men, which is probably a metaphor for most working age males leaving the village in search of work leaving their families behind. Ghulam Hasan is resident of that village who lives with his mother and his wife Khairun. Ghulam’s family own some land, a good amount of it is usurped by the local land lord. He is poor there is not a lot of work for people to do in his village. During this time Ghulam’s friend Lalu Tiwari who lives in Bombay, comes to visit his family. Lalu asks Ghulam to come with him as there are no jobs in the village. Ghulam takes up this offer and leaves for Mumbai.

After reaching Mumbai, Ghulam starts the work of taxi repair and later learns to drive a taxi, he lives with Lalu in shanty house. Lalu has a girlfriend and he is looking to rent a place. He cannot afford one as housing in Mumbai is very expensive. Ghulam slowly gets used to the life of the city and its insensitivity. Some how death keeps lingering around him. His life in the city, and his experiences form rest of the film. The film ends with a heart-breaking scene with the same thumri that starts the film playing in the background.

The film touches on a lot of things about taxi drivers, migrant workers and issues they face in general. Most of those characters are migrants from UP. Taxi driving is not an easy work. Most of them have back problems and also threat of accident is real. Loneliness is the biggest problem for migrant families. They worry about their family coping by themselves and on the other hand the family is also worried about how their sons in a strange town are doing.

The film is not all sad story, there is brotherhood and people take care of each other. When Ghulam needs to send money to his family, his friends in the city help him out. He finds work easily, but cant earn enough to bring his family or pay a visit.

The film is shot in a neo-realistic style, with mostly non professional actors. Only the main roles were acted by professional actors. The film was shot mostly outdoors, capturing the culture of the village also the city of Mumbai. It is very successful at showing the life of Mumbai and the loneliness in a very crowded city. The camera work is exquisite.

Performances are fabulous! Farooq Sheikh was great actor, he was excellent as Ghulam! Smita Patil who was one the best talents of that era was great as well in the role of Khairun. So was Jalal Agha who played Lalu Tiwari and Gita Siddharth who played Lalu’s love interest Yashodhara. The film is also a debut film of the actor Nana Patekar.

This film has one of my favorite sound tracks of Hindi cinema. Jaidev who composed music for this won a well deserved national award for this film. The songs in the film were a big hit and even after these many years can give you goosebumps. The background score was terrific  as well. Too bad Jaidev didn’t compose for many more films.

I strongly recommend this film for its realism, music and to learn about migrant workers. It will make you shed a tear.