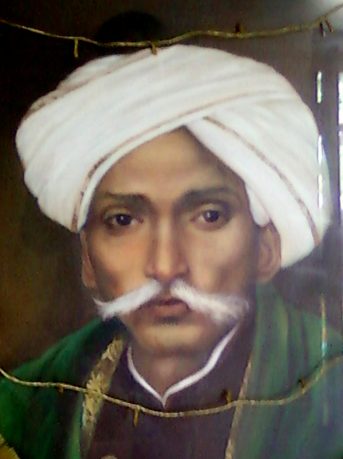 Whenever we expressed our incredulity about the content in Puranas, our revered teacher Sastry garu used to censure us saying, “Your education is a silly putty. You have lost your sense of reason. You are just becoming Buddhists .”

Ramamurty was the most mischievous of our lot. Putting up a very innocent face, he once asked, “Sastry garu, what kind of people are these Buddhists?”

“Coming Sunday, I am going to deliver a lecture on this subject in our backyard garden. You may attend, if you are interested,” Sastry garu threw an edict-like invitation.

That Sunday afternoon, around four in the evening, about twenty-five of us students gathered under a mango tree in full bloom. While we sat on the plain sand soil,  Sastry garu seated himself opposite, on a loin cloth stretched out. When I tried to bring a plank for his seat, he refused, saying, “When all of you are sitting on the immediate soil, how can I sit on a plank?”

On taking water from two green cocoanuts, and chewing his customary pan, he commenced his lecture on Buddhism. Ten minutes into his lecture, Ramamurty looked up from the book he was reading, and he asked, “Sastry garu, your discourse is based on Sarvadarsana Sangraham, isn’t it?”

Sastry garu could not hide his bewilderment. He said, “Bless my soul! But how did you get to know that? Surely, that book in your hands is not a translation?”

“This Englishman is really great and competent! What is the other book?”

“Where did you acquire such rare books, I wonder?”

Sastry garu took the books, and embarked on a mellifluous recitation of the verses followed by a lucid explanation for our benefit.  It was a picturesque presentation of the import.  That evening was wonderful.

On the way home, Sastry garu observed, “It beats me how the Englishman found such deep interest in our Sanskrit education.  He is digging up all the rare items of our obscure scriptures!  Unquestionably, the Divine being is resident in their minds!”.

Four days later, Sastry garu announced in the class, “Ramamurty, until I read the book Buddha Charitramu, I was ignorant of this great man Buddha. He must, of course, be the tenth incarnation of Lord Vishnu.”

From that day onwards, he stopped calling us Buddhists. However, he preferred to call us Christians for our incredulity. Unable to glorify Christ as the eleventh incarnation of Lord Vishnu, we resigned ourselves to it.

Honestly speaking, Sastry garu was a peerless teacher. He studied Logic under a Guru, from Varanasi, serving him for long. He was renowned to have no match for him in Logic in the country. Besides, he had such fine poetic sensibilities that he could appreciate and appraise the quality of any literary work. And as for his character, he was so naïve that I always wondered how such innocence and fine sense of reason coexisted in the same person!

What I am about to narrate had happened some ten years back. Sastry garu had long retired from service and was now taking pension. Some of us still served him. He used to delight us reciting some of the great Sanskrit texts extempore and explaining the beauty thereof.

I was into business. Ramamurty, with his large estate of agricultural land, turned to cultivation with some of the advanced farming techniques. The brook flowing by our village had a natural spring, and he raised a beautiful garden abetting it. Flowers or fruits, he never enjoyed the yield of any season himself without first handselling Sastry garu. Taking a leisurely walk in his garden was our Guru’s favorite pastime. Most often, we held our meetings there. Venkiah was a school teacher; he was extremely strict and had earned a bad name for himself on that count. Of our schoolmates, six to seven still were living in the village. It was always a divine experience when we had a meeting with Sastry garu.

Let me come to the point.

Ramagiri was a Vaishnavite place about eight miles from our village. I will describe it some other time; suffice it to say, for the present context, that it was a relatively modern temple. Buddhist ruins lay scattered all around the black-stone knolls of the village. They were known locally as “Pandavula Panchalu” (Hutments of Pandavas). Of course, in our country you never find a cave where Pandavas had not lived or a pond where Sitamma had not performed an ablution.

In one of the big caves there, Saivaites started offering prayers taking one of the Buddha statues there for Lord Siva, and the Devi idol next to it as Gauri.

Years passed by. One day an English archaeologist set up a camp in the mango grove on the western side of a promontory, complete with his retinue of clerks and peons. Employing many coolies, he launched out a project of excavating the hillocks there. People thought his enterprise was in prospect of some hidden treasure. But, he actually collected broken idols, delicately carved stones, cracked pottery, utensils, and other relics of the eras gone by. He arranged them meticulously, valuing them more than any riches.  Some of us went there to witness the goings on.

When we reached the village, the place was agog about the milk-white marble idol of Buddha which the Saivaites were worshipping as Lord Shiva. We saw it. It was very elegant and beautiful. The Englishman had acknowledged that he had not seen such a graceful image of Buddha even in Kandahar. Some of the Buddhist precepts like “Eh dharma hetu prabhava” etc., were also exquisitely carved at the foot of the idol. The Englishman coveted it most, and asked the community if they could part with it. But the elite Saivaites refused, saying, “We would rather part with their lives than with the idol.” They conveyed their denial to the Englishman in polite tone and tenor as they considered him one among them. Otherwise, the matter would have taken a nasty turn. The matter ended there, and the Englishman pursued it no further.

But one night, Sarabhayya, the chief priest who observed the regular worship of the idol, pulled it out from its base, brought it to the Englishman secretly, and offered it for two-hundred rupees. The Englishman, for fear of accusation of complicity and to save his own reputation, sent word to all people that mattered. Sarabhayya thought the Englishman was crazy, and the moment his attention was diverted from him, he took to his heals towards the promontory, then beyond, and had never returned.

Nauduri Murthy is a Managing Director by profession and a poet and a passionate translator. He translated hundreds of poems from Telugu to English and vice versa.