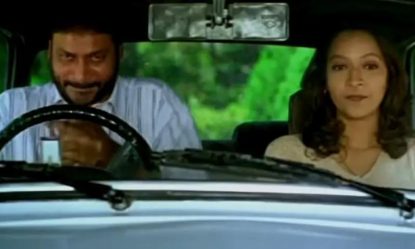 “All the world’s a stage

and all men and women are merely players”

Neelakantha started his film making career with a Tamil film Priyanka which was a remake of the Hindi film Damini. Show was his first Telugu film. He has made eight films so far in his career.

This film is produced by Manjula Ghattamaneni who is a daughter of Krishna, one of the superstars of Telugu film industry. She also acted in this film.

Show is one of a kind of film in Telugu film industry. This the only feature length film made in Telugu about a couple of unrelated characters spending a few hours together. Such films are rare even in Indian Film industry.

The plot is, Ridhima flies from Delhi to meet Professor Krishna Rao. Krishna Rao found some ayurvedic cure to cancer, Radhima an executive from a pharmacological company that wants to license the drug. She is there to finalize the deal. When she arrives she learns that the professor had to go out of town due to some emergency, and he would be back in the afternoon.  It is a Sunday so nobody is around. He leaves the key to the house so that Ridhima can make herself comfortable.

Bored Ridhima  goes exploring the interesting location of the professor’s house. She records a message for her boyfriend Sanjay.  Meanwhile Madhav arrives. He is a lawyer who is working on a deal. Madhav is upset that he has to wait and can’t make it to his son’s cricket match. His manager overworks him and he is trapped in a bad marriage.

After getting acquainted with each other, Ridhima and Madhav do not know what to do while waiting. Ridhima says that she would give her paycheck for the month if Madhav entertains her. Madhav who was an aspiring actor in his past, starts to entertain and brings his own demons out.

The film is mostly about Madhav’s character study. Madhav is talented. He is an excellent actor and a great cook. His wife doesn’t appreciate any of it. Madhav is strongly attached to his son. His wife thinks that he is spoiling him. She doesn’t think that Madhav not being able to make it to his son’s cricket match is a big deal. Madhav has a lot of pent-up anger that could be dangerous if brought out.

Ridhima is a modern girl. She is ambitious, and is cautious about making commitment to her boyfriend. We don’t learn much about her, other than this. There are no other characters in the film except the professor who is almost in the background.

While there isn’t much to say to the story, the film is really interesting. Ridhima and Madhav come from two different worlds. Ridhima is practical and cautious, Madhav is probably a bit reckless and is struggling for success.

Surya is very good. He nailed Madhav’s character and his inner demons. Manjula who is played Ridhima is not bad. She produced the film and cast herself.  I wonder why she didn’t act in any of films before.

Background music by Raj is good. Camerawork by Ravi Yadav is quite good. There is an interesting contrast of outdoors and indoors in this film.

Neelakanta’s direction and screenplay is excellent. With only two characters and interaction over a period of few hours, he wrote a very interesting screenplay. He engages the audience through out the film. I hope he made more films of this sort.

Watch this film for this rare very interesting film about two strangers meeting and spending time together trying stave off boredom.