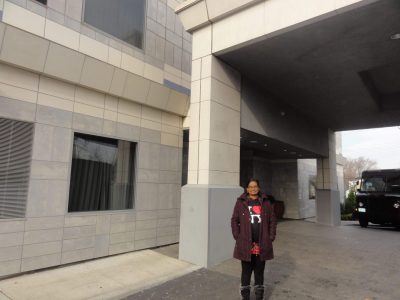 Kids are persisting to go somewhere during the holidays. Everyone suggested their own choices of places. Varu researched on Google and confirmed the Hawaiian Islands, with printed details on a piece of paper. For so many days, dissatisfaction with not going to the East Coast of America remained strong in me. New York was the only place when we meant America in our childhood days, Yet, I have not seen it so far.  ” First New York then only Hawaii” I became stubborn.

When I came up with the idea of ​​booking tickets in advance for the summer vacation they were away from the stars. I preferred the advance booking. As soon as the idea flashed to my mind, I booked tickets for New York in advance, during the upcoming “Thanksgiving” holidays which are nearing three to four months, adding them to a few more bunk holidays.

After booking the flight, I started thinking about the coldest days of New York.  ‘Can we manage to travel with kids for a whole week?  Now leaving the doubt aside, I began to work on my mission.  I started planning the whole thing as usual.  Which places to go, What to see, are we only seeing New York all week, Would it be possible to see any other places around, How to go if possible and many other such kinds of questions. Search for Hotels everywhere we go, day tours, and a car to travel. I began my research. Searching for good offers on Google, taking notes, reading details on sites like TripAdvisor, etc., began.

Anyway,  it’s difficult to search for everything with a single brain, so I started taking the help of children. Talking at the dinner table every evening, making some reservation ideas, again new ideas for the next day.

Eventually, I came to a decision on my own.  I browsed online and booked a five-day “East Coast Bus Tour”.  A five-day tour of five states for a total of five days. Niagara was also on the list. There was also a good offer due to the offseason.  Buy two tickets, and get two free.

The package also included the Bus Tour Hotel.  We will reach the day before the tour and stay another day after the tour is over.  We booked our hotel for those two days.  We planned to use those two days to make ends meet, or to prepare for the trip, and to see for ourselves what’s more to see in New York.

November came sooner than expected. I booked everything online, including accommodation, travel reservations, flight tickets, and taxis from the airport to the hotel and other destinations very liberally without much hesitation. (Regardless of how much money is spent. Of course, we spent money extravagantly)

We started our trip with bags and baggage. As we’re traveling by flight we should have to pack according to US Domestic Airlines regulations.  If we carry large suitcases like in India, we will have to pay a fee of thirty to forty dollars for each suitcase. Only small handy-size bags are free of charge.  I thought quickly right away.  I arranged a meeting with the kids. Meanwhile, Satya came up with a proposal saying, “Let’s do something. We will not be billed for bringing such handbags carried by everyone individually and you will also have less burden.” The children agreed.  What’s more, I passed a rule to put the luggage in a row in the hall tomorrow. Everyone should carry their bags. That’s why we packed all-wheel-drive bags and small-wheel-drive suitcases.  Each one is carried with shoulder straps.  And the baby cart for Siri as it is very difficult to manage the kid when running and sleeping. The whole staff in the hall by morning is eleven in number!  Seeing all this, Satya, jaw-dropped!

“What is the meaning of it if you fall sick for this?  We have to carry all this stuff outside for a week and turn around. I arbitrated.

When we looked for the New York Weather Report the day before the trip, the same day there was a big storm! Umbrellas, raincoats, winter coats, thermals, gloves, etc., another list is ready. We rushed back to the shops and bought what we did not have. In our region of California, the temperature never drops to zero degrees.  But now the places we are going are likely to be in some minuses.  Hence these precautions.  But I realized every step of the way how good it was to carry them all.

The day of our departure approached.  We booked the shuttle taxi that would take us home from our flight at nine in the morning, so we got up at dawn and were ready to go.  Siri also got up at five o’clock.  I do not have the burden of a bag because I carry Siri.  As Komal grew up, he attended all the works well.  Varu has become a big stylish girl in ten years. She never keeps her hair falling back except on the face. She carries her bags and does not allow others to touch them.  The two of us sat looking at these children and laughed throughout the journey.  We arrived at San Francisco Airport in about seven hours. When we got down and checked in, the children began to say  ” We are terribly hungry”.  Satya breathed a sigh of relief as everyone’s luggage came out safe at the checking point.  He does not like petty disturbances like interrogatories in checking on trips like this.

At the checking point, we had a hard time stopping Siri from running even in the small gap when we were sending the baby cart to the checking machine! The same problem is everywhere! While everyone was busy checking in and putting on the peeled-out coats and shoes, the kid would run as far as she could. Someone has to be on guard all the time. The same thing applies to us wherever we leave off.  Siri taught us to run well on this journey.

We do not like to have to buy and eat food on a domestic flight like cold sandwiches. It is a pity that the children get bored of sitting on the flight till 7 pm from ten o’clock in the morning. The time difference between the west coast of America to California and the east coast of New York is three hours. The time here now is 3 hours ahead of us.  We thought it would be 4 pm at this time in California.

Luckily by the time we landed, the storm had cleared. The plane landed safely at New Jersey EWR Airport, hovering like a bird over the city, glistening in the rain in the dark.  From there we got on the taxi service booked to get to our hotel in New York and got off well as we had the option to call after landing.  As soon as we came out of the airport we experienced the cold that twisted our fingers. We wore gloves quickly. Coats, mufflers fastened. Yet, no change. For every five minutes, we would do our guard duty on the luggage, and run into the mirror cabins.

Our taxi boy has been in New York for the last 20 years. He spoke very enthusiastically and shared his experiences. Our hotel is close to New York JFK Airport, about 40 miles from here. The reason we had to book a hotel there was that the tour bus stop we had to board at around 6 am the next day was nearby.  The city, drenched in the cold rain all day, was glistening with water droplets.  Occasional drizzle was seen as light clouds of drizzle fall at night.  Because it was wet and dark, something seemed as if we were traveling through the time machine into antiquity.  We couldn’t find the glistening on roads like in California.  The children hurled questions on the driver all along across the bridges and roads.  I was looking out and listening to everything. We reached Hampton Inn in another hour.

We ordered Indian food on the service that brought us to the hotel where we stayed. We could hardly eat that stuff of rice labeled as biryani. It’s better than the cold bread that afternoon we ate.

The children took a hot bath and glued to the TV. It was a great feat to make everyone put to bed to get up early in the morning. The morning and evening time-table starts for us from the next day.  Waking up in the morning and going to bed at night was already half over.  But none of us could sleep because of the timing difference.  Siri actually slept well on the flight until twelve and so she climbed up and down everyone’s room and wandered around the rest of the night.  And we stayed awake until the baby went to sleep.  However, we spend our time chatting and laughing about the joy of seeing new places.