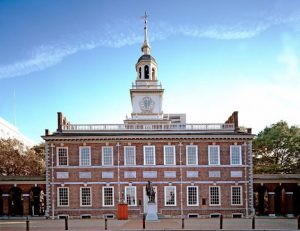 The previous day’s fatigue from the New York City tour was felt the next day. It was so hard to wake up in the morning. Of Course, but it’s inevitable. We got up at five in the morning, finished our baths, and got on the bus at 6 o’clock. The bus left New Jersey for Philadelphia.

Travel: On our trip from New Jersey to Philadelphia, all along the way it seemed like a pastoral atmosphere. The sporadic houses seem to be scattered hither and thither.  The world appeared to have not yet woken up at that time because of the cold of winter, and everything was lazily sleeping in the wee hours. Except for the bus we traveled on, no vehicles were found on the roads. When the world’s quietly falling asleep, it felt good to break through the snow and see the first rays of the light falling on the morning clouds slowly turning white.  The journey after so many journeys of life gave me a lot of solace.

It took more than two hours to reach Philadelphia.  Everyone was wearied. Waking up in the morning is one of the most boring businesses.  We fell asleep on the seats. When I woke up, it was like a dream.

Philadelphia is the second-largest city in the state of Pennsylvania. It was the American capital city from 1790-to 1800. The historic American Declaration of Independence was read on the large grounds where we walked in front of the “Building of Independence”.  The 2000 £ Liberty Bell was built in England for the Liberty House. This bell, which was used from 1753 to 1846, cracked several times and was repaired and used. It later ceased to boom and was kept there for tourists to visit.

Our guide told us to take photos of the building facing us from the outside and go for breakfast at the Chinese hotel that’s open in the shopping complex opposite. The outdoor weather showed zero degrees. We could not stay outside for at least half an hour though we were given one and half hours. The children marched, played, and ran like soldiers enduring the bitterness of the cold. We stepped into the opposite building shown through a restaurant door ushered by a woman. It’s a buffet breakfast. We brought some cosine cakes and avocados as we can not eat Chinese noodles, non-veg, and so on in the very early morning. However, it’s not known until the bill arrives at the counter that the food was weighed and billed. Once we got suspicion in the middle that the food on the plates was so heavy because the pieces are more than half the size of the palm.  Watermelon, Chinese watermelon, and pineapple were all the same size. Grapes are very rare. The pieces that weighed handsomely charged fifty dollars. Even though we felt bad at that moment, now we laugh when we remember that experience in that restaurant.  Due to such bitter experiences encountered on this journey, Satya said “How wrong it is to book without knowing who’s running it before booking the tour !!”  He felt bad and beat his forehead many times.  But no one in this country would speak of such details anywhere.  Therefore it is also very difficult to know in advance.

We traveled almost four and a half hours to Washington, DC, the capital of the United States, via Maryland.

There were no robust trees or forests along the way except a handful of tall pine trees. There seemed to be some industries all along the way. The difference between this city and California’s striking.  All those places were very ancient that can be known by the first look at them. After that visit, the craze for America’s east coast was gone.  Life in California is very good, even though it’s very expensive.

We traveled over the city of Baltimore.  Baltimore is a popular Naval Coast on the east coast of the United States. Maryland is the largest city in this state. It would be nice to stop in every city but due to the predestined bus tour, we had to satisfy ourselves by looking through the glass windows of the vehicle.

The children went into a deep sleep again. It’s amazing why they were falling asleep. They wake up at 6 am usually at home on school days and do not go to bed until eleven at night. Probably we came back 3 hours in the time zone. Though I fell asleep for a while, I woke up quickly to see what was missing outside. We took many photos from the bus to capture all of our memories, constantly looking out for new places with wide-opened eyes.

Washington DC – White House: We arrived in DC at eleven o’clock. The first stop is the White House.  Visiting the White House means it’s like taking photos over a garden fence from almost a quarter of a mile away.  Our guide showed certain points saying, “Here is a great spot for a photo that looks awesome.”  We laughed at his remarks. Leave Obama, at least even his guards also could not be seen.

“If you want to go inside the White House, you have to apply months in advance and make an appointment. That’s a big fuss,” said our guide.  After ten minutes of squatting in the crowd, taking photos from where the White House view looked a little better, we said “goodbye” to the White House and Obama.

We have about an hour to get our bus back.  We went to the washrooms near the permitting complex near the front gate that leads into the White House. I was surprised to see that the area was filthy. It’s the area where the President lived, hardly at hand’s stretch! We fell into the habit of thinking about and comparing the hygienic atmosphere of California.

We went outside to bask in the sun setting on the flower beds around the building. Outside on the road, the vendors on food vans sold water, cool drinks, and other eatables. We spent some time around them again. There too, similar tables were found by the Indians. We were greeted in Hindi upon seeing them. It seemed to me that we were in New Delhi. Water was more expensive there. The bus arrived just as I was about to talk to them. That day was mainly for watching Washington DC City, half wasted, as usual, to see what the guide wanted to show, rather than what we wanted to see.

The guide gave us a quarter of an hour to take a look around the building in a crescent-shaped stairway over the lawn to take photos. He made us hurry and confused that there was no parking anywhere. It took us a quarter of an hour to climb, descend, and get around the stairs. No more time to stop and take photos. That means walking as fast as we can whenever we lag a few minutes. With the baby in our hands, it became even more difficult for us.  We picked up Siri when she grumbled to sit in the baby cart. It’s a great fun experience to run and crash into a bus while the guide was waving his arms in a hurry.

Though the hurry was to show us everything according to their plan, everywhere we felt in such a rush about what could be enjoyed properly.

Being the capital city, the town is so magnificent.  Large mansions, wide roads, and massive gardens. We felt like coming and paying a visit there again.

The long “Washington Monument” can be seen from any corner around the White House.

Our next stop is the “Natural History Museum”. We planned lunch right there.  I’m glad this History Museum is one of the places I want to see.