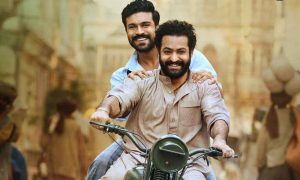 Distorted history boasts of bellicose glory… and seduces the souls of boys to seek mystical bliss in bloodshed and in battles. – Alfred Alder.

RRR is a film directed by S.S. Rajamouli and written by V. Vijayendra Prasad. It is the most expensive Indian film ever made. Once the version dubbed into Hindi was released on Netflix, it became a huge International hit. The film is set in 1920 under the British Raj.

This is the first out and out commercial cinema (Mass Masala Entertainer as we call them in India) that I am writing about. This film is as mainstream as it gets. Initially I had no interest in watching this film. Once it became a huge hit among the international audience, I wanted to find out what clicked. My articles are usually introductions to films that I think are worth watching. This one is a review.

S.S. Rajamouli started his career as a film maker with Student No 1. He made 12 films so far. All of them went on to become big commercial successes. His film Bahubali 2 is the highest grossing film in India. He is one of the few directors in Tollywood (Telugu mainstream film industry) who is considered bigger than the stars. He is known for action and fantasy films.

Vijayendra Prasad started his career as a screenwriter for the film Janakiramudu in 1988. He worked on several films as screen writer and directed four films. HIs film Rajanna won the Best Feature Film at the Nandi Awards and Bhajrangi Bhaijan for which he wrote the screenplay won the Best Story at the Filmfare Awards. S.S. Rajamouli is his son. Vijayendra Prasad has been the screen writer for most of his son’s films.

In 1919 Rowlatt Act was passed which allowed the British government to detain Indian citizens without any trial. This act was used by General Dyer to detain a peaceful gathering at Jalianwallah Bagh in Amritsar and he issued an order to shoot at people indiscriminately. 375-1450 people died on site. Many were wounded and jumped into a well to escape the shooting.

In 1920 non-cooperation movement was started by Indian National Congress under the leadership of Mahatma Gandhi. Even though congress’s contribution was crucial to India’s independence, there were several freedom fighters who fought against the British rule in their own way. Alluri Seetaram Raju was one of them.

Alluri Seetarama Raju was born in 1887. He was educated, but dropped out of high school. According to some sources he travelled around India. He made friends with tribals of Northern Andhra Pradesh. The Madras Forest Act of 1882 upended the lives of the Tribals of India.  Moved by their plight, Alluri joined forces with the tribals to fight against the British government. He was a master of guerrilla warfare. Alluri along with his troops attacked local police stations for arms and ammunition. This upraising was called Rampa Freedom Struggle that lasted from 1922-1924. It ended with the execution of Alluri Seetarama Raju.

Komaram Bhim was part of a different upraising. Bheem was born in Gondi tribe of Northern Telangana. That land was under Nizam rule at that time. He killed a Nizam official and escaped to Maharastra where he learnt to read and write English, Hindi, and Urdu. He worked in Assam plantations for a while before he moved back to Hyderabad province. He led an upraising against the Nizam government with 300 people demanding an autonomous Gondi region. He is credited with coining the term “Jal, Jungle, Zameen” (water, forest, and land). He was killed an encounter led by Abdul Sattar in 1940.

The plot of the film is very simple. A governor called Scott Buxton and his wife Catherine kidnap a Gond girl named Malli and take them to Delhi. Komaram Bheem along with his friends goes to Delhi to rescue her. There Bheem meets Alluri Rama Raju and they become close friends. Rama Raju has a mission of his own. He baits Bheem for his mission but rescues him which costs him dearly. The villain dies in the end.

This is a typical action thriller with no respect for physics, character, or logic. There is no  credible reason for Buxtons to kidnap Malli. She sings well and is a good tattoo artist. (or rather paints. Gondi art is fantastic!). Why would anyone kidnap her for that? All British characters  except the woman who falls for Bheem are cartoonish cruel villains. (Does this remind you of Lagaan?).

The film is said to have based on two revolutionary characters. It is not, rather the characters are named after two historical characters. If they think this is historical in anyway, it is happening in some parallel universe. There are more than a few liberties taken.

Rama Raju works for British as a cop so that he can become in-charge of an armory and smuggle arms from there with the help of his uncle and no one else.

Two things worked well for me. The action sequences as unbelievable as they are, were well shot. Chemistry between Rama Raju and Bheem is fantastic! I don’t think this is meant to be a gay love story. India is still largely homophobic, the director wants to make money not get into social rights debate.

The song Dam dam reminded me of dam dara dam song from Guru composed by A.R. Rehman. Komaram Bheemudo feels like a direct lift from a song called Madana sundari used in the film Rangulakala. (I don’t know if Madana sundari song is a traditional folk song or composed by Vinjamuri Anasuya Devi). Dances however are quite entertaining.

Acting is ok. There isn’t much to write about. NTR Jr who played Bheem was pretty decent. I wish Samudthirakhani had a bigger role. Alia bhat had two scenes. I don’t understand why the leads spoke in a low husky voice. It felt weird.

You will definitely be entertained, if you like mindless action thrillers. Yes, this is India’s answer to Marvel Cinematic Universe.