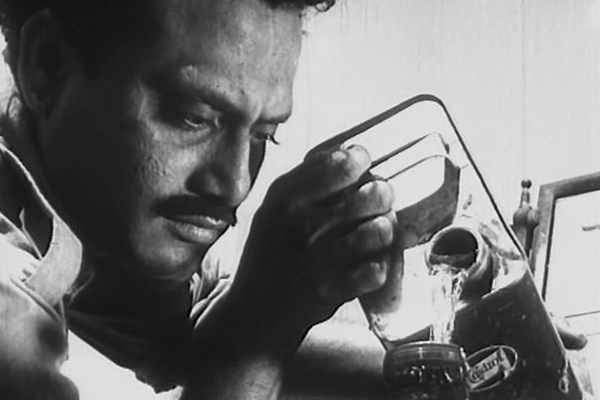 We all have things that are beyond their prime. They may be torn, spoilt, or broken. But we cannot get rid of them.

This month’s film is Ajantrik, which means The Unmechanical.  This film was directed by Ritwik Ghatak based on a short story by Subodh Ghosh. The English title was “The Pathetic Fallacy” It was made in 1958, and was considered for special entry at Venice film festival. This film is one of my favorite films of all time. It is one of the first Indian films if not the first to have an inanimate object as a character. This film played at Lincoln theater recently. This film is said to have influenced Ray’s Abhijan which in turn influenced Martin Scorsese’s Taxi driver.

The great film critic Georges Sadoul said the following about the film “What does ‘Ajantrik’ mean? I don’t know and I believe no one in Venice Film Festival knew…I can’t tell the whole story of the film…there was no subtitle for the film. But I saw the film spellbound till the very end”.

A few words about Ritwik Ghatak. He made eight films. Some were screened at various festivals, a few didn’t even get a release. He made the first art film in India in 1954 called Nagrik (The Citizen), but it did not get a release until after his death. His most successful film is Madhumati for which wrote the script. He is now among the most revered film makers, with retrospective of his films all over the world from time to time.

Ghatak like Sadat Manto was a product of partition. Ghatak was originally from East Bengal and moved to West after the partition. His films were mostly stories of immigrants their aspirations, tragedies and hopes. His films were heavily influenced by his Marxist politics and also by Indian theatre. He effectively used melodrama to tell his stories. I think Ghatak was probably the most personal film maker from India. He was an artist who tried bare his soul through his films.  He is my favorite Indian film maker!

While Ray may be the most well known film maker, Ghatak is probably the most influential. He influenced Mani Kaul, John Abraham, Saeed Akhtar Mirza, Kumar Sahani, Adoor Gopalakrishnan, etc. He taught all these people when he worked at Pune Film Institute.

The film is about Bimal who has a 1920 Chevrolet Jalopy. He drives it as a taxi to fend for himself. The car seems to have a mind of its own. It communicates through noises and movement of headlights. It is called Jagatdal. As it is an old car, it is in a pretty bad shape. The top of the car is torn, the doors come off.  But, it can drive. Bimal is obsessed about his car, people ridicule him for that. To him it is his friend, family and everything. His relationship with his car, how it affects him is the crux of the story. The film though is sad in someways, it has a lot of humor as well. Quirky people who get into his car have some interesting stories to tell.

The film is about obsession. We always have something we hang onto, a relationship, a book, an article or a memory. We don’t need it anymore, and it costs us a lot to have it. But we don’t get rid of it. Losing it distresses us. Bimal’s obsession with his car is similar. He knows it is junk. To him it is a companion. He has to take care of it no matter what. I wonder if it a metaphor something else. A metaphor for the past perhaps. The past can sometimes weigh us down. Ghatak was obsessed about his homeland. I wonder if the car was meant to be his memories for his homeland and the need to move on.

Kali Banerjee who acted in Ghatak’s earlier film Nagrik (The citizen) acted as Bimal. He was great even though he didn’t win any awards. There were no national awards at that time.  Kajal Gupta who acted a passenger was good as well. Anil Chatterjee shows up in one scene.

The film’s sound track is excellent. Ghatak loved music. Music in his films is always exquisite.  This film is no exception. Music was composed by Ustad Ali Akbar Khan a noted Sitarist. You can close your eyes and just get lost.  The sound track is a curious mix of North Indian classical and rural folk music. The film’s sound design is amazing! The sounds of the cars and the rhythm of the folk music weave into the narration beautifully and enhance the experience.

Camera work was by Dinen Gupta, who also directed a few films in Bengali. He collaborated with Ghatak on two other films “Bari Take Paliye (The Runaway)” and “Megha Dhaka Tara (The Cloud Capped Star)”. The camera work was very good.

This film is way ahead of its times. Watch it for an experience like no other. It will make you laugh, shed a tear or two and make you smile.