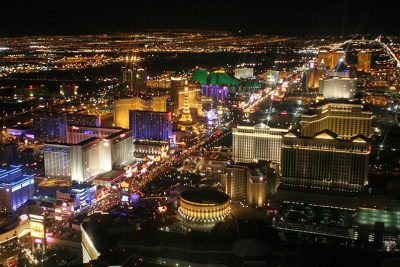 America Through My Eyes- Las Vegas

Las Vegas is a world famous gambling city. It is in the State of Nevada adjacent to California. As there are not as many restrictions as in California, gambling, prostitution and drugs are very common there. People from all over America come here to gamble. Some for fun, some as a habit, some because they are bored, some to make some easy money, many people come here. People like us go there to see what’s so great about it.

Apparently, some people keep a part of their salaries aside every month to come, gamble here and have fun.

The casinos here are entirely a different story. They are equipped with many modern things and amenities to attract tourists.

All in all, according to some people, it is the city to visit at least once in lifetime.

So, we had to check it out!

The first look of the city:-

We entered Las Vegas at eleven in the night straight from the Death valley. Almost away from ten miles, this mega vast city appeared with bright lights in the middle of the desert.

Las Vegas is a night city. It is the city that acquired the special beauty of night. It’s the home for relaxation, fun and entertainment. I wonder how incomplete lives would’ve been on Earth if not for the nights. Las Vegas is the heaven on earth that makes such nights complete with its brightness.

The street lights were shining brightly in the center of the road from ten miles away. The different shapes of shining lights arranged by the casinos to make them look luxurious created a festive mood. One can see bright light in the sky as far as the eye can see. Though all that is artificial lighting, the city looks beautiful in those lights. Just like we stepped into heaven on earth – it’s true – there are many options in the city to spend money extravagantly.

We kept our luggage in the hotel and went out. We read reviews online that this is not the place to go out with kids and only eighteen and above can explore the city. So, we were being conscious when we took our kids out. But we saw many others who were roaming there with kids, almost everywhere.

People wearing revealing clothes, kissing and hugging in public are very common in this country. We are very much used to it now.

There is nothing from which we can protect our kids in a place where people are so used to nudity. We can’t escape when we are going outside and especially in places like these.

But casinos follow some strict rules specifically for kids. They don’t allow kids inside the casinos and into the gambling areas. Anyone can visit children’s areas and the special attractions in the casinos.

There are special circuses, casinos that look like circuses, shows and entertainments.

First, we visited a casino-cum-hotel called Stratosphere. We can view the entire city from the 113th floor of that casino. This is the tallest observation deck in the entire country. To go there, we had to pass through verandahs and lifts filled people with loads of make-up, wearing weird clothes. It was not allowed to stop anywhere near the machines with kids. There are people warning everywhere. If we have to play, we have to come there without kids.

We went to see the tower, first. There is a special ticket of twenty dollars for that. Surprisingly, it took less than a minute to reach the 113th floor in the elevator. That was a very modern elevator which didn’t make us feel like we were traveling so fast. At the last floor, there is a revolving restaurant cum observation deck fitted with glass from top to bottom. There is a way to go outside from one side. But since the wind was too strong, we didn’t enjoy spending time outside. Anyone will be thrilled to see the view from the top. It felt like watching stars in a bright galaxy from top of hundred floors.

All the glitters in the city look like they are bowing. We spent almost an hour there without realizing. If we sit on the slanting glass, we could see humans the size of an ant’s head walking below, cars that looked like toys, huge buildings that looked like doll houses. The thought that we were on top made us feel nauseated. Kids and Satya were excited about the free fall from where they could jump to the bottom. But lucky for me, the management said that the ride was not available at that time. Though the kids were disappointed, I felt relieved. It was scary to look down from that height, I couldn’t imagine jumping. No matter how many ropes were tied, I felt irritated about that weird ride.

Because of the time constraint, we decided to visit only one or two places. There were plenty of shopping malls and ATM machines available. I think the money spent to lighten that place for one night can fulfil the hunger of many countries. It made me wonder where these modern casinos are taking human existence? These casinos that encourage money, luxury and recklessness are run by the rich to become more rich. If we put the thought of making money there aside, the people who lose money at these places are mostly middle class people.

Luxury is the hopeful side of the man. In this country, Las Vegas is the city that makes money through that angle. Many people say that Las Vegas is their favorite, instantly when asked. The reason is, there is something in this city that satisfies the weaker angles of people.

If not for the artificial beauty there, it is nothing but an empty desert without a single green tree.

Though it was past midnight, no one was feeling like sleeping. We roamed outside all through the night until we wanted to sleep. Since there was nothing much in Stratosphere that could be visited along with the kids, we came out within an hour and simply spent time exploring shopping centers, buildings and looking at lights and people with weird dressing.

The four and half mile area in the south Las Vegas Boulevard is called “Las Vegas Strip”. The world’s top fifteen biggest hotels are right here. The biggest of them all consists of 8000 rooms. Surprisingly, though these hotels were very big, we could get rooms for lowest prices. Apart from holiday seasons and weekends, the prices of the rooms are almost one-third of the original price. At some places, there are rooms available at twenty five dollars per person. In fact, that price is not profitable for them. But all hotels have their own casinos and bars. The hotels make profits from the money spent by the guests in those casinos and bars.

In the ‘Circus Circus’ casino, there are special rides and shows for kids all along the year and a circus show, too. Outside of the biggest hotel Casino Venetian, there are boat rides on the canals under the bridges reminding us of Venice of Europe. The entrances of the casinos are built in different models to attract the tourists. The entrances that resemble a huge guitar, huge water fountains, volcanoes, Eiffel tower, New York City, Statue of Liberty, etc. with unique decorations attracts tourists in a large scale. You can only imagine how successful gambling business in this city is by seeing the profits the casinos are making.

We didn’t dare to check out those machines and how they work. But we had that experience in another place called Rino. I’ll tell you about that experience another time. Maybe we are the only people who visited Las Vegas but didn’t gamble. We spent a good time with kids, though. We spent time watching those bright lights. As far as I know, that is the only best thing in Las Vegas.

Since we were roaming all night, we couldn’t wake up early in the morning. Almost around noon, we had our lunch and explored the streets driving around in the car. The city looked empty with all the beauty lost from the night. Very few people were there just coming out tired and lazy from the night before, like us.

It looked like a different city, entirely. The city looked like someone decorated it just for the night and left in the morning, like a beautiful city has been cursed.

Since we wanted to visit the Hoover Dam during the day, we decided not to step into the indoor casinos. Hoover Dam is towards eastern side of Las Vegas city. We saw this dam in many movies already. We saw Hollywood villains holding another person from this dam and throwing them down. All the dam scenes from Transformers are shot right here.

This dam is visited by at least a million tourists every year.

Hoover Dam was built during the years 1931 – 1936, on the Colorado river in the Black Canyon mountains located in the border of Nevada and Arizona.

Since there was heavy traffic on the way that leads to the dam and also due to the checking, it took more than thirty minutes for us to reach there. If looked from a distance, the road bridge looks like it splits the sky into two between those mountains hanging high above. Parking also looks like it’s carved in the mountain. There is a small path to walk on the corner, inside of the mountain. On the way towards the dam, there is a tribute for the 112 people who lost their lives while constructing this dam. The line that says, ‘They died to make the desert bloom’ near Oscar Hanson memorial brought tears to my eyes. They let us walk to the dam. If we walk to the edge and look below at the building 726 feet below, it makes us giddy. There is a power station somewhere below. The human made lake formed by this bridge, ‘Lake Mead’ is the biggest reservoir in America. Lake Mead is on the other side of the dam in dark blue color.

Wherever you see, there is great beauty in that place and one cannot simply leave. Mountains, river water, nature, human made wonders, everything is immensely beautiful. Because of the crowd, we felt like we were in India.

While returning, we went for the helicopter ride at the first corner. Though it was expensive and the ride is only for a short while, it is an adventurous experience to those who have never been on a helicopter before. It is a wonderful journey of soaring above those mountains like a bird, somersaulting in the sky, and landing on the ground.

I kept shouting something all through the ride with excitement. I felt like I suddenly grew wings. It was like hiding inside a glass bird and looking down onto the earth. It was wonderful, really. It was an unforgettable experience for me. The jealousy I used to feel about the birds that fly freely in the sky, disappeared from that moment.

The experience of seeing the dam from all sides remained alive in my heart. Since we had to reach our hotel before it got too dark, we bid farewell to Las Vegas and continued our journey towards Arizona.. Leaving behind the brightly shining city and the lively Hoover Dam! Madhuri Palaji is a writer and book reviewer from India. Her book “Poems of The Clipped Nightingale” is available on Kindle. She writes book reviews for various publishing houses like Penguin Random House, Meerkat Press, Hot Tree Publishings, Bethany Publishers, etc. She is one of the top 50 book reviewers in India. Her reviews are available at http://www.theclippednightingale.com/