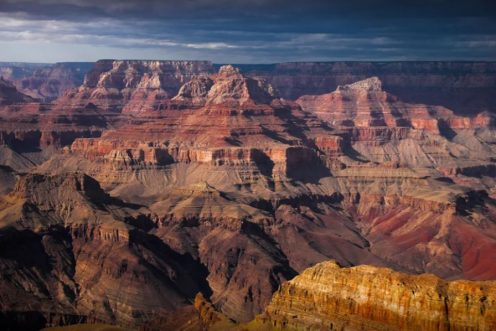 America Through My Eyes- Grand Canyon

Few locations and certain panoramic beauties are more appealing in pictures than to optical experience. Rather than watching videos and pictures, we rapt with joy when the eye catches glimpses of its reality. A feel of elation once I owned when I was with Taj came again with the visit of the Grand Canyon. Perhaps I would have seen the Taj a million times in pictures since my childhood, but never will I forget the massive beauty of the fantastic structure of the Taj Mahal, which I treasured in its presence. I wouldn’t take away the beautiful experience off my eyes for even a moment.

The Grand Canyon is about 900 miles away from our home in the state of Arizona. The tiresome journey takes about fifteen hours. It takes another five hours from Las Vegas. We reserved the visit till our mother-in-law’s arrival so that we could go on the trip.

THE TRIP: We left Las Vegas early in the morning. Since we cannot travel back the same day, we planned to stay there at night near the Grand Canyon. We couldn’t find any accommodation in and around the Grand Canyon Village, which we had experienced in Yosemite. We booked a hotel suite in Kingman on the way back.

On the way from Las Vegas through the Arizona desert, what we found from our experience is that there was no other source of livelihood for people except casinos. No traces of greenery nor the rudimentary of crops. The small villages seem scattered hither and thither hardly one at least for a hundred and fifty miles. Everywhere there, we find a kind of red soil, roads coiled like a lazy snake, and the dilapidated wooden structures oscillating to the blown wind.

Indeed we are on an ecstatic joy of pleasure trip driving around the world in our newly bought grand looking car. The elders accompanying us couldn’t take it happily. The infinite, unending desert of Arizona made them irritating, and for God’s sake, they fell into a deep sleep, even though few found snoring as nothing was pleasing to their eyes. Though the kids are all together on the verge of plunging out from the car once it stops, yet, presently they see through the windshields quietly waiting for the moment.

Though we traveled until noon in ‘Area 51’, we couldn’t find any food court to get something to relish. After a great trail, at last, we found some little edible crumbs in a small shop housed in a petrol station. We happened to see a hoarding appear on the sideway alluring the passers-by, leading to the “Area 51”, a secret research institute that was said to have located somewhere in the desert. We got down at the junction and found the restrooms, where a trace of a single living soul was seen. The cool breeze is ravenous, and the cool water is biting; every structure there seems ironed. Nothing works here, yet, we find plenty of paper rolls. When Varu goes into a washroom, it takes at least one hour to wash her hands. No sooner had she stepped in than she dashed back to the car. There was nothing around but a petrol station. We can see only a road stretched almost ten miles ahead and ten miles behind. The brown cinnamon horizon between the earth and the sky. Except for the sudden roar of vehicles passing our car, nothing prevailed in the great silence. A sudden imaginary idea chilled me in a fraction of a second, in case our car breaks down. The idea that the car would stop at such a place scared me. We boarded the vehicle quickly. We were supposed to reach the Grand Canyon by evening.

We travel hundreds of miles ahead. It was three-thirty when we approached KingMan. We proceeded towards the Grand Canyon without going to the hotel to fill the fuel as the time didn’t permit us. The ghat road began from Williams. There is not a patch of green but unending hilly ranges.

Every surrounding is filled with rugged rocky hills. The whole soil seems beautifully wrapped up in red attire. It was five o’clock when we arrived at the Grand Canyon Visiting Center. As it was luckily summer, the sunset was at eight-thirty that day. We needed to pay a $ 25 fee to enter the park with our car. The Grand Canyon Village is indeed located in the southern part known as the South Rim, which was a developed tourist spot. There we found at least 17 viewing points. In the beginning, one or two places were accessible by walking some distance from the parking slot. Knowing that there would be a free bus tour from the last stop, we headed forward. Private vehicles are not allowed from there. The only way is to get on the bus they provide. All of a sudden, a change in climate felt as the clouds had started to shroud. We couldn’t find any parking slot nearby. When we finally did park the car and stepped out, the cold wind began to blow so ravenously that my hands twirled with a biting chill. If this is the case in the summer, how would it be in the winter conditions, we could not imagine. We did not prepare with coats and other precautions as it was a hot summer. The bus stopped at each point every two minutes and headed again. We were to make a shift getting down and boarding in between looking around for a moment.

The heat trapped in the massive valleys of the mountains overtook the cold breeze that evening and traveled in a wink of an eye. When the bus landed at the first stop, Komal exclaimed, “How nice it would be if I could have wings to fly.” I noticed Sathya, who watched in silence everything, remaining like a rock mysteriously looking deep into the void. I’m dumbfounded altogether! Faintly visible streaming of graceful Colorado curves in the far below of the valleys. As if to mount upward to the sky step by step, join hand in hand with the forgotten waters of those rivers as if the air is sporting a game of hoodwinking, so crystally defined lines of rudiments. The tremendous rocky mountain cliffs that propelled upward resulted from the tremors in the womb of the earth where the earth and heaven struggle to meet. When all these experiences to the eye are seen from the precipice, it is more appealing to name the surging soul as a cascading wave rather than a flight!

I never imagined Nature is so generous embellishing the rocks so beautifully. The Grand Canyon is an amazing place for anyone to visit once in a lifetime.

It’s learned that the Grand Canyon can be reached from the North. In the lower Colorado, river-rafting is allowed with some limited permission. Some enthusiasts take up trekking and go around valleys.

The Grand Canyon cannot be seen in a single day as the range of its total length stretched over 277 miles with a width of 18 miles. We can see at least ten miles of a stretch as there is no hindering thickets anywhere along the mountains’ ridge. The bus stops at every turn where there is an impressive view as the road coils with turns.

After the bus took two or three turns, the clouds diffused, and the evening sun broke into light shining for a while. A great glow of orange light radiated throughout the valley. The Grand Canyon bloomed with the fiery crimson fire on the highest peaks that just erupted from the earth as if it was colored with sacred horizontal Vibhuti stripes. As soon as I looked out, my heart gripped with pain, and the memories of a distinct birth suddenly swarmed, and the tears welled up. I just in a moment of a surge, wished to dive down into the valley stretching the wings and tangible with the enticing Colorado flooding streams, and catch the waves of the river at the tip of my beak, tapping those cliffs one after another gracefully, and whirling round and round in the infinite rolls with the rapturous joy, crashing into the sky, I just adored to see that wonderful pinnacle.

Once in a while, we were at a loss of words though there had been plenty of sickening thoughts, then the silence enveloped us. As long as I gazed at the Grand Canyon, I felt the silence. Though someone was around raising questions, the children hurling with queries and an infant crying at the top of lungs, the body just dangled around, the mind detached from all of them and wandered elsewhere.

It is the stillness of silence that wrapped me up maybe the rapt of joy or the sorrow born out from those reminiscences of my readings about those Aborigines once lived and flourished, the rudiments of their granaries, the river basins that had been deformed by the construction of the dam, about the rights that the tribes fought for and won, about the pathos of hunger died away in the rocky shores.

I nodded, lost somewhere, when Sathya jubilantly exclaimed, ‘We should come again by any means and stay at least three days!’ Yes, Grand Canyon is a place of inexhaustible solace.

When the evening started to fade, we traveled homeward. Once the road turns past the Village Center, nothing is visible anymore. The traces of that majestic valley just become a past now! When I was thoroughly lost and couldn’t wake up, Satya rescued me by taking up driving. It took us three hours to Kingman. The dinner was fruits and biscuits. Suddenly we remembered that we ought to have reached home by the following evening, as Komal had an exam the next day.

We bid farewell to Arizona the following day and left for California. I waved my hand to the Grand Canyon. Hoping confidently that the air that traveled through the glaring light

in the sky that touches my hand may hover in those valleys one day and surely reach me again.

It happened to be Sunday, and we halted many times and had to travel around Las Vegas, and particularly with the suffocating traffic jams, we lagged behind at least 9 hours, approximately by 900 miles traveling, and reached in the wee hours of early morning 4 o’clock. In late-night, around midnight, I took up driving. My eyelids are heavy with drowsiness, and the mounting darkness around the car blocked my road view. It’s my responsibility to make everyone alert in the car and to take home safely. I proposed to pull over the car by freeway for an hour at least to have a nap. Again Satya resumed driving. Though It’s altogether 20 hours of marathon drive in a single day that exhausted every nerve yet, it remained a significant challenge. Komal gets into books to attend the next day’s 7o’ clock test straight away without going to bed. We forgot everything and fell upon beds to wake up at 10 o’clock the following day. Varu was laughing at me, looking at reddened eyes. I looked into the mirror and felt elated, witnessing the crimson shine of the Grand Canyon reflecting in my eyes.