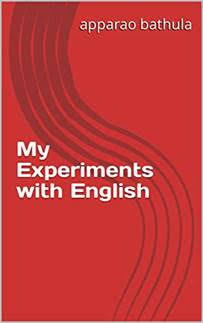 “My Experiments with English”

“My Experiments with ‘English”, by Rao Bathula, an English enthusiast residing in Hyderabad, India, is an extraordinary effort and a brilliant concept of revolutionizing the writing in English. Its first time in the grand history of 5000 years of its existence, where Rao Bathula has successfully attempted to defy the very basic foundation on which English writing has been built. He deserves full appreciation for channeling all his energies on one single point for almost 2 decades and achieving what he wanted us to consider.
While we all know, that the beauty of the English language lies in the rich variety of words, it’s wide acceptability is because of adaptability. Each year, an estimated 800 to 1,000 new words are added to English language dictionaries (in the 20th century alone, more than 90,000 words have been added). This significant increase in new words included is primarily due to technology and in the way, sometime people spontaneously coin new words in their email and text transmissions that move quickly and efficiently via social media to get recognized.
Wish, the style created by Rao Bathula to leave behind a few English letters and attempt a new way of writing garners momentum and gets into practice.
Rome was not built in a day…

Venkata Ramana Satuluru, born at Hyderabad, studied in different towns like Darjeeling, Jabalpur, Varanasi and many other places owing to his father’s job in central govt. Started his career with Pharma Marketing. After one and half decade of service, moved to Life insurance Trainings. Presently working as a freelancer for Trainings, Publications, Content Writings, Translations, Press & Media services, based at Hyderabad.  He is also a Certified Healthcare Coach and thus guiding many to rediscover true health thru natural systems. Though his prime interest and work is in healthcare campaigning. He also read a lot of other materials irrespective their genre,  which helps him become more creative and flexible in approach.