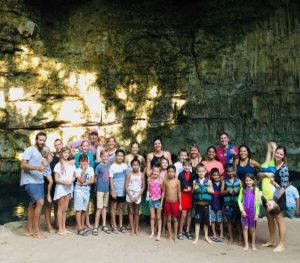 I suddenly woke up remembering I had an appointment with two pre teen girls in the community to do my hair that morning.  They advertised the previous night about their business.

Young entrepreneurs in the making! I thought. Hair braiding caught my eye. How cool! I decided to get it done. Afterall I was living a hippie life. All I needed was a hair braid and a tattoo!

When I got out of my room, these girls were waiting for me with really bright colourful threads in their hands. I sat on the concrete edge of the fountain while they both stood either side of me. They got into their business quickly. They spent about an hour braiding around a few strands of my hair. When they were done with it, I thought I looked super cool with this braid that gave a wonderful look to my black hair. The rest of the mums agreed. Later in the week, almost everyone got their braids done with these two. Other children followed the girls and came up with several business ideas in the next few days which I will write in my future episodes.

With my new look, I was really excited to explore the nearby cenote that day. We got ready with our backpacks packed with swim suits and change of clothes. We all gathered outside the gate of Anahata waiting for the taxis. Every child had a backpack and wore a sun hat. About 6 families including Patty and her three kids, Maud family, Cowboy hat family, French magician with his family, squeezed in with a few younger kids in our laps. Christian stayed back to do some chores at Anahata.

We were visiting “Cenote Xcanche” that day which was very close to Ek Balam. Some families sometimes cycle or even walk to this Cenote. We chose to go by car as it was our first time.

A cenote is a natural sinkhole resulting from the collapse of bedrock that exposes groundwater.  They were mainly used for water supply for ancient Mayan people and for sacrificial offerings. We were told that there were thousands of them around in that region. I was really looking forward to visiting Cenote, swimming there and feeling the energy. More than me, boys were looking forward to swimming and Aanvik even packed his arm bands.

The taxi drivers left us at Cenote Xcanche and asked us the possible pick up time. After the taxis left, Mr. Cowboy hat, who claimed that he had experience dealing with the people in Mexico walked to the ticket counter and tried to negotiate a price in  spanish. He was explaining to the guy at the counter that we were a big group and we keep visiting this Cenote regularly and we deserved to get a discounted price. “It’s only fair” was his point.  I looked around while I was listening to their conversation and we were the only group that morning.  While this was happening, the kids decided to run around in that huge open place with lots of trees which looked like a forest. At that moment, a confused bee decided to sting a young girl(magician’s daughter) who was already in her swimsuit.

The girl started screaming and crying at the top of her voice and for a minute we didn’t know what was happening. A boy looked up to the tree above and saw a huge honeycomb with thousands of bees hovering around. Though they didn’t chase us, it’s just one very adventurous bee that went a bit out of the way and caused trouble. He alerted us quickly and ran towards his mum.  The moment we saw the honeycomb, all the kids started running in different directions. Some older kids ran really fast towards the Cenote which was quite far from the main gate to escape bee stings. Mrs. Cowboy hat swiftly pulled her homoeopathy first aid kit from her bag and applied a cream on the poor girl’s wound. The pain subsided and within a few minutes, the girl stopped crying and started playing with the rest of the children. We all felt a sigh of relief.

While the rest of the mums enquired about the homoeopathy kit to Mrs. Cowboy hat, the negotiations at the counter came to an end. The guy at the counter offered us life jackets to those who needed them at a discounted price and said that’s all he could do. I picked 2 life jackets though Aarvin was a confident swimmer by then. Without complaining about not getting much discount, we all moved from that location and started walking towards Cenote as fast as we could. Tortilla chips and biscuits were widely shared among us on the way.

After walking for a while, we reached the beginning of a really steep staircase made with wood down into a big hole in the ground.  Apparently that was Cenote. We started walking down the steps carefully. There were about 100 of them. Those deep waters were in beautiful turquoise blue. Several aerial roots were hanging from the top into the cenote.

While I was looking around at the same time making sure that I didn’t trip, suddenly I heard a big thud and a splash from the bottom. I realised it was Sebastian(Patty’s 12 year old son) who jumped from the edge of the wooden staircase into the cenote. I stopped and opened my mouth in shock as a minute ago I saw him a few steps ahead of me. Rest of the parents were cheering him on for his bravery. Someone from behind was saying the cenote was at least 90 feet deep. After a few seconds, Sebastian floated to the top of the waters and started swimming. He clearly jumped from at least 30 feet above the waters and I was wondering how deep he must have gone in. My legs started shivering after the calculations in my head. I decided to shelve my plans to swim that day and just watch others from the bank. I looked at my boys with a confused face and was wondering what they were going to say. Even they looked confused.

Valentina followed Sebastian and she made a couple of flips in the air before jumping into the waters. I looked at Patty who was just smiling and not saying anything. I asked her, “are you not scared?”

She answered “I am, a little bit, but they are wild, I have to just hold my breath and watch” Valentina floated to the top and started swimming. They must have done this 100s of times with every family that visited Anahata. Apparently they never had any swimming or diving lessons in the past. They just picked it up by themselves and by seeing others.

One by one both adults and kids started diving from a height that they were confident in. I put life jackets on for the boys and tried to encourage them to get in and swim like other children. Like me, they decided not to do that and just swam around at an area that looked shallow. I found myself a comfortable place to sit and watch the rest. Other mums tried to persuade me to swim but I told them that I will save it for another cenote. I should have gone in so boys would feel confident seeing me. But, I was nervous thinking what if I sink to the bottom and no one can rescue me. Afterall, I was responsible to make sure the three of us were safely back home in England. I had an excuse to cover up my fear.

It was time to finish the trip and go back. Taxis were already waiting. We came back to the parking area and checked if they were serving any food there as we were all super hungry. To our disappointment there was none. Kids had to satisfy their immediate hunger with the leftover snacks we got in our bags. We squeezed into the taxis again to get back to Anahata to have a late lunch.

Later on during our entire stay, visiting a cenote once or twice a week became part of our routine. One such trip was to Cenote SAC-AUA which was about 10 miles from Anahata. Someone said the waters were not deep and kayaks would be available to rent. This time I made up my mind to swim at any cost.

This cenote had an island in the middle and blue waters around. There were two guys collecting the rent for Kayaks per hour and making note of time and handing over the life jackets. The waters were dead, freezing cold. There were some fish in the waters.  I slowly got into the water and started to swim around. Aanvik got in as well while Aarvin enjoyed his kayaking. When I came out I felt pleased, energised and satisfied. Jumping and diving continued for some time by many children.

On the way back, a sudden scream “Churros”  by Maud stopped the taxi to the side in the centre of the village Hunuku. “How can you drive past the churro cart?” was Maud’s question. The taxi driver didn’t mind waiting while we decided to enjoy the street churros.

The owner of the shop along with his other family members running this business. While he was making the fresh and hot churros, the wife was frying chips and the son was serving the food by sprinkling sugar and chocolate sauce on churros and ketchup on chips and collecting the money.

We stood there, had little conversation with this family while enjoying the delicious snacks. We got some takeaway for the families that stayed back at Anahata and left from Hunuku. We got back to Anahata and were welcomed by the delicious energy balls made by Alex with local cacao powder, dates, coconut and coated with sesame seeds. They just melted in my mouth. We all were behind Alex asking her to conduct a workshop on how to make them. She agreed cheerfully.

2 thoughts on “My Mexico Adventures – Part 3”