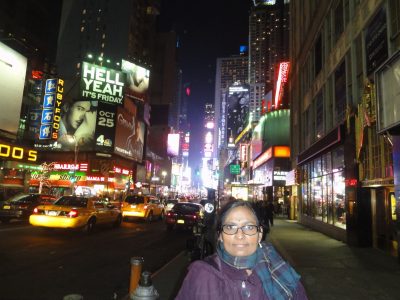 We booked a 5-day bus tour to visit the east coast of America.  We arrived in New York the night before. We’ve to get on our tour bus at 7 am in Queens, New York. We got up early in the morning, quickly checked out by 6 am, had our free breakfast at the hotel, and boarded the van we booked. Our bus stand is exactly ten minutes away.  But it was terribly cold when we set foot outside.  Probably there may be a 1-degree centigrade. It’s inevitable to proceed once we booked tickets!

Tour Bus: Arrived at the bus stop on time.  The bus stop where we boarded the bus was actually just a small stop on the side of the road with no shelter.

Horrible cold wind gashed us when we got down the van. There’s no shelter nearby to keep Siri warm. All the shops along the road were closed. Though we wore two to three pairs of clothes on top of each other and put on coats, caps, gloves, etc, the cold was throbbing like anything, and one can understand how terrible the cold outside is.  Luckily a Chinese man who was waiting there for us said, “I am just waiting for you, hope you are the people who booked the East Coast Tour bus.”  The suitcases are in our hands, and the five of us in number hint him that we are the tourists. When we said ‘yes’, he asked us to show the booking tickets, then he took us to board the bus. The bus was already crowded. We occupied the last seats. Again he went and brought the other two with him and the bus departed at exactly the time they had said.  He said it was Chinatown near Queens, from where we would first go to Chinatown in Manhattan, and then by reaching there, we would have to change buses on our routes again.

The bus was nice and warm so we were able to recover immediately.  But we have to travel all over New York in such a similar cold condition all day long.  With such a small kid how could we manage is a big question before us. I  wished that it would be good when the sun shines bright soon. By the time we reached Manhattan in another hour the sun was shining bright luckily as if God listened to my prayer.

In my childhood days, when our grandmother used to do Surya namaskars, I asked once, “Grandma! Why do you salute the sun?”  The answer she gave at that moment came to my mind. She said eloquently, saluting the Sun, “Would there be any meaning to this world unless the warmth of the Sun is not there?”

But that joy did not last long. By the time we got off the bus to change the other, the cold air started slashing us beyond the warmth of the Sun. Same problem again. There was no shelter. A little better there though.  At least there was a closed alley above between the adjoining shops. We stood there.  I snuggled up on my suitcase. The wind was blowing from either side in the alley.  Other tourists were waiting for the buses to disperse on different routers. The company agents were loading each batch route-wise. Our turn came only after waiting half an hour to forty minutes later. I never understand how I managed to sit on the suitcase, snuggling the baby in a shawl like a refugee in such cold. Thus began our east coast pleasure trip.

At last, when our turn came we got on the bus. Again last seats. We happily took it though.  Another two or three seats behind us were also vacant.  We felt that it would be convenient for Siri to play well there freely. Though we planned to reach our destination early, the delay in the bus made everything unexpected. That’s why our guide rushed us everywhere throughout the day.

Manhattan: The place is said to be very rich. The China Town, however, appeared to be as filthy as anywhere else.  And in every street, not, in particular, Chinatown, when we looked at the garbage bags piled up by the side of the road, we exclaimed, “Was it New York town?”

As we prepared to move around in the cold, we said to ourselves, “We’re not going to be afraid of the cold, and decided to move around like this for the next five days.” It was a pity to see Siri enduring the cold with us that day! When it was very cold, she sat down quietly, not even disturbing us a bit in the baby cart, looking down sadly and bending her head into knees. It is a pity that she did not cry anywhere.

Wall Street: As part of our tour the bus first stopped at Wall Street. The stock market street. In that terrible cold, we all have to follow our guide with a red umbrella on a run-like walk. We ran behind him all day long! We were the last ones to get off the bus as we were actually occupying the last seats.  Each time, it took us a while to get Siri accommodated into the baby cart. So every time there is a bit of delay. That is why we alloted the duty to Varu to follow the guidelines of our guide as soon as we got off the bus.  Komal follows Varu as and when she needs help.

When I longed for a photo here and there even in that congestion, Satya said, “Hell with your photos!… at this terrible cold and hurry-burry time?”(indeed, they are very important to me, to tag my writings like this). Watching Wall Street means just walking along the street looking at the billboards and big buildings! Our guide led us through the small alleys between the high skyscrapers while the cold was biting our bones in the morning. After a few minutes’ walk from there along the two streets, he pointed to a metal bull and said, “Everyone believes that if this “lucky bull ” is touched, the stocks will run like that bull.”  Everybody rushed towards it.

While everyone was busy, I saw a Mexican girl there selling small glass dolls on a small cart on the side of the road.  It is a pity that she’s selling in such a terrible cold so early in the morning. I bought a small “glass bull doll” for $ 15 out of sympathy towards her. As everyone was standing in line and competing to touch the metal bull even after ten minutes, our guide started to make them hurry. I laughed at the commotion there.

The atmosphere on the bus was far better than outside. Our guide said, “There was the place where the 9/11 incident took place near Wall Street, unless we get permission in advance, we can’t go there.”  Oops! I was a bit annoyed at it, not showing me the place I longed to see. Yet, I felt relieved with the thought that as we allotted one more day stay in New York town, we can make it out.

Statue of Liberty: From there it is the second stop on the boat trip at “Statue of Liberty”. It’s a 10 am to 11 am trip from Pier – 16 South Street Seaport in downtown Manhattan.  $ 30 ticket for a person. We got off the bus and followed the guide’s red umbrella throughout.  He said that he has already bought tickets for all these sights, and nobody would buy tickets on their own. He handed out all of those bills on the fourth day of our trip. The crowded boat set off in another half hour.  Inside the boat, there were crowds of visitors on both stairs.  As we boarded at the end, we sat on the seats near the threshold. By that time the sun rays were warming the deck. The boat traveled through the waves of water glistening. We felt the cold outside only when we climbed on the top of the deck through the glass chambers.

The “Statue of Liberty ” is a symbol of freedom that every minute I dreamt of whenever I thought of America. The excitement of watching it made me happy. I thought, Am I waiting for her or is she waiting for me since 1886 with an inextinguishable flame of the torch?

All our assumptions were suddenly overturned. They turned the boat back whirling ten minutes after traveling one hour. I quickly went to the guide and asked, “Aren’t we landing there?”  He promptly replied, ” Nope! It takes half a day to get there. This tour is limited to one hour.”

I stared blankly at the island greatly disturbed, not even blinking my eyes, who believed America meant the “Statue of Liberty” leaving it without stepping on the island.

Throughout our journey, the guide has been digging through the history behind erecting the statue there. I can not hear anything.  Looking at the bay through the glass door, “Had we come here simply to get away from there not landing there?” I thought to myself and perhaps I spoke out loud.

“I’ll bring you back here one day, Mom! You can see then, don’t worry, let’s go” Komal said lovingly, clasping his hands around my shoulders.

I felt elated listening to his words whether it was going to happen or not!

If we buy Liberty Cruise tickets ourselves to go up to the Statue of Liberty and want to spend as much time as we wish, the ticket price is only $ 18 or 21 dollars.  As we booked the tour tickets with them, we had to limit ourselves.

Guide-language: The funniest thing on our tour was that the majority of the people on our bus were Chinese. The bus company was also Chinese. The Chinese guide first deals with the majority of the visitors on the bus speaking in Mandarin, the Chinese language, and then in English for the rest of us. That English too with a Mandarin accent, can not be understood at all. Moreover, he spoke it fluently without a comma, full stop, not knowing where he spoke English or where he spoke Mandarin. We listened keenly to his English.  He spoke very concisely in English in one sentence and then spoke for half an hour in Mandarin. Though I laughed sometimes, at one point I got tired, sadly for the children. Satya was irritated and he thumped his forehead frequently. There were two or three other South Americans on the bus with us but no Indians at all. The food was always Chinese with every stop where Chinese food is a must.  Sometimes we could find a different kind of food, but sometimes we had to eat something else whatever was available there.

UNO Office: The next stop in ten minutes is the UNO office. It’s also be seen from the outside. We got off the bus and took photos from the side of the road. By that time the children began to fall asleep. The two of us got off the bus and boarded the bus again after taking a few snaps. Actually there’s nothing in particular to take great photos of it.

(The rest of the day will be in the next issue)