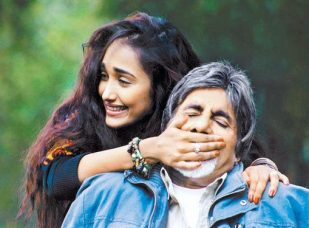 Nishabd is a 2007 film directed by Ram Gopal Varma and written by Kusum Punjabi. The actress of the film Jia Khan won the Best Debut Performance award at the Filmfare Awards in 2008.

Ram Gopal Varma started his film making career with a Telugu film called Siva. He is credited with changing the mainstream films in the Telugu film industry. In Siva for the first time mainstream film the actors spoke, looked and dressed as they would in real life. He made several Hindi and Telugu films including Satya which is one of the best gangster films of India. He made films in different genres. Ram Gopal Varma also produced several films starting a wave of independent films by giving platform to the directors like to Sriram Raghavan and Anurag Kashyap. In my opinion Nishabd was the last good film by him.

I couldn’t find much information on Kusum Punjabi except that she worked on two films with Ram Gopal Varma, Nishabd and Darling. She was also an Assistant Director on four other films.

The film opens with Vijay standing on a rock hanging over a cliff looking down as if he wants to jump. Vijay starts to narrate his story. He is married to Amrita for 27 years, they have a daughter called Ritu. Vijay is an award winning photographer of repute. During summer break Ritu brings a guest called Jia who is her classmate. Jia’s mother in Australia. Vijay doesn’t like Jia at the first sight. But he is slowly drawn to her and they fall in love. This ends as it is expected.

Vijay is not attracted to Jia’s body. To him it is his missing youth. He is undergoing a midlife crisis. In a relationship with her, he wants his youth back. Vijay’s family isn’t much interested in his work, to them he is not extraordinary like he is to Jia.

Jia doesn’t have a male role model. Her parents are divorced and she does not touch with her father. She doesn’t like her mother’s partner. Her love for Vijay could be Elektra complex.

The film has only 6 characters. They are Vijay’s wife Amrita, his daughter Ritu, Amrita’s brother Sridhar, and Rishi who likes Jia. Amrita is a typical Indian wife who stopped pursuing Bharatanatyam after her wedding. Ritu is a typical teenage daughter. Sridhar is also a friend of Vijay, who wants Vijay to be reasonable. Rishi is there only for a couple of scenes.

This film is only shown only from Vijay’s point of view as he is the narrator. While we see others’ reaction they all are from his point of view as well. The film is sensual but not vulgar. The portrayal of the characters is very sensitive. While a 60 year old falling in love in with an 18 year old sounds creepy, the film succeeds in making you feel empathetic to the characters.

Ram Gopal Varma’s direction is very good! Some scenes are remarkable. A scene where Vijay keeps remembering some jokes told by Jia and keeps laughing in the bed. Also another scene where Vijay looks at himself in the mirror and comes out. His wife Amrita is sleeping. He stands for sometime looking at her.

Screenplay by Kusum Punjabi is very good. She is the reason the film is as sensitive as it is.

The film was beautifully shot in the location of Munnar in Kerala. Camera work by Amit Roy is very good. So is the background score by Vishal Bharadwaj. There are some songs in the background, which are fine.

The performances are film are very good. Amitabh Bachan as Vijay was very good. He is vulnerable, sensitive and sad. Nasser and Revathi are as good as they are in every other film. Jia Khan as Jia was very good. Too bad she committed suicide at a young age.

Watch this film for it is a sensitive portrayal of a complex story.