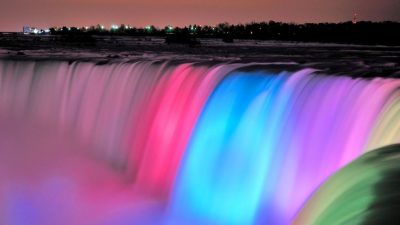 As usual, early in the morning, we departed from DC.

We had to travel over 400 miles that day and reach Niagara by the night. The guide said that we would stop at two places and also for lunch on our way. We traveled from Washington DC through the states of Pennsylvania and New York. On a pleasant winter morning, we traveled across the fields, when the sun rays were playing hide and seek game from behind the clouds of the morning sun. The villages looked alike altogether from any corner we passed. On the way, I took a funny photo. It was a long-painted chicken advertisement on a truck going by our side. Later when I showed them and asked about the location where I took, no one could expect it.

Children slept all along the way happily. As it was a very long journey I too felt sleepy. But the interest in seeing everything outside kept me awake. It was cloudy all day so the light was dim and our trip continued as if before the daybreak. Within a week of our return, we saw on the news that the surrounding area had been hit by an unprecedented blizzard and everything was covered in snow. We felt relieved reading the news as we luckily escaped such trouble. On the journey that day there were occasional thin showers.

The front of the factory has a large gift shop and children’s indoor play areas. We moved on to an adjacent factory tour line. The entire setting bay was furnished with dark, dim lighting, tree paintings on the walls, and tree branches hanging above to create the illusion of walking among the cocoa trees, in the dense forest all the way inland. Indoor box trains, such as the one we boarded at Disneyland, were loaded at a time four per box. Varu being ahead of us and Komal behind us we all boarded into the compartment. The tour is set up with sample displays, ranging from dairy products to cocoa imports to chocolate making. But everything in those product units only exhibited with the lights and gadgets, but the real factory making of  the chocolates was not demonstrated. So Varu gets very disappointed with that. When we visited the Jellybean Chocolate Factory, they showed us every unit of manufacturing in California.

There seems to be nothing like it here. The children bought one gift item each at the gift shop as they had time to go out and buy a bag full of chocolates too.

From there, on the way to Route 322, our guide showed us the small-sized Statue of Liberty on the Susquehanna River in Daphne Neros. The statue, which is actually 25 feet long on the remnant pillar of an old-fashioned railway bridge, looks very small from a distance. It is very appealing to see the statue standing amidst the majestic flowing river waters. It was erected by the locals as a replica of the original Statue of Liberty.

Our bus stopped at a place like a supermarket for lunch. There’s a buffet-like dining facility. All the prominent country dishes, one or two were there. There’s only a vegetarian section for Indians. We ate our roti and chana curry eagerly though it was not tasty. There were four to five Chinese items. There was also Italian pasta, French bread, and meat varieties from this country were also seen. Being priced according to the items made it possible, it became very easy for anyone to buy what they could choose. On long journeys, children find it fun to enjoy every edible despite what they eat and what not. So I made them learn how to choose the food items when they demanded. Unless they finish it when they order, not carrying the stuff into buses, they will be allowed to choose next time on their own,  otherwise, they should eat what adults ordered. The grown-up Komal laughed a little about it and left it, but Varu became stubborn and said, “That rule should also be extended to the elders and Siri too” adding that “there are no rules on travel, only at home.” However, she was happy when we said there were no rules for locally available varieties like ice creams, fruits, and chocolates.

And our next trip was filled with a lot of fun and frolic. Even in the first week of December, it started falling snow as a sign that we were traveling to a higher place. At one place, by a small road bridge, the children saw the hanging of the snow like knives. The children shouted to see it. Everyone on the bus looked at us strangely at those shouts.

At 3:00  pm, our bus stopped near the “Corning Glass Factory” in New York State. What fascinated us the most before stopping near the museum was the piles of snow floating outside.

Before going inside the museum, the children began to demand to play in the snow for some time and squatted there. But we took them inside as we had to follow everyone. Siri had to be forcibly taken in. as she is sneaking away leaving the hand and running into the snow.

When we happened to leave our guide at one point, we no longer caught up with the batch until it made it clear exactly where to go next.

Guide gave us tickets to a small exhibition made of glass bulbs. All the seats were filled when we went there searching for it. We stood at the end and watched. The two experts skillfully displayed the red melted glass solution in the fiery electric furnaces, such as blown glass bulbs and utensils. They gave glass jars to one or two visitors who were chosen by them on a lottery basis from the tickets given to those who attended there. The museum houses many of the world’s finest glass artifacts, collected from various places worldwide. I like the place. Excellent colors, nice workmanship. Insatiable unique beauty no matter how much you look at it. Being a fan of glass materials, I bought some small glassware when I got back. Throughout the journey, the only most irritating thing was that we were asked in the airports to keep every pack open and to pack again after the scrutiny.

We’d to come out of the museum earlier than others to let the kids play in that snow for at least five minutes. I felt, what greater joy could there be in the world than to see the joy of children throwing snowballs at one another in the snow! It is a joy that can only be experienced by children. Within five minutes, I was reminded that “I am a mother” even though I played equally like a joyful child.

It was getting dark by the time we left there. We reached Niagara at about 9 p.m. Meals before occupying the hotel rooms were not available outside at that time, and so we were first taken to the “Native Center” where a festival of local artists was taking place.