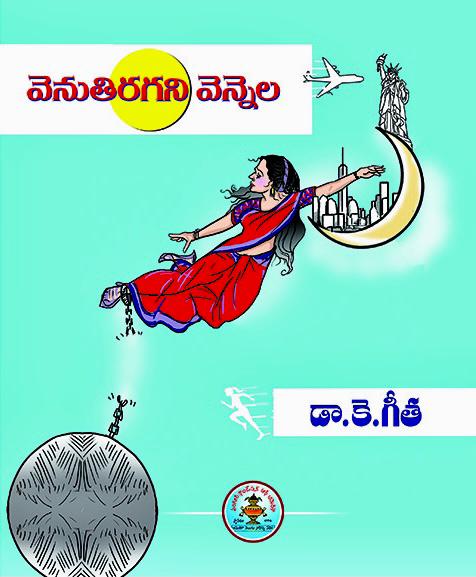 Sameera comes to meet Udayini, a friend of her mother in America, who runs “Sahaya”, an organization that helps women. Sameera gets a very good impression of Udayini. Sameera, who is four months pregnant, says that she wants to get a divorce and the circumstances are conducive to that. Udayini tells her that she would tell the story of “Tanmayi” and then she decides herself after listening. Shekhar writes a letter to Tanmayi, who is studying intermediate, after seeing her at a wedding. Tanmayi, who is a bit emotional, gets interested in Shekhar.

The evening light was gradually vanishing away. Birds were chirping and reaching their nests.The night jasmine vine crept up the terrace with the radhakrishna vine competing with each other with blooming flowers as it is like day and night.

Tanmayi plucked the buds into the basket and sighed.

Vanaja, who was next to her, laughed mischievously and said, “Don’t mess up your mind by thinking about it continuously! If Shekhar really likes you, it’s love at first sight.”

Tanmayi said, “Uh Uh! That’s not what I was thinking, I still don’t understand why he didn’t take his studies seriously. Maybe being the eldest son in the house got in the way of his responsibilities?”

“You seem to feel the pain that I have pointed out the mistakes in his letter. That is not my intention,” Vanaja said.

She finished plucking the night jasmine flowers and took a big piece from the reel of thread with her teeth and gave it to Vanaja. Handing over a bunch of flowers to Vanaja, to be tied into a wreath, looking at the end of the street, a two-wheeled bullock cart that was flying dust, and the herd of goats following behind it, She said a bit philosophically, “Animals and birds are better than us, they don’t have any pain!”

She knitted the flowers and jabbed the first strand in her head and said, “We too have no pains either.” Vanaja smiled.

Tanmayi has been thinking for a week about whether to reply to Shekhar or not. She thought, “I should start this evening when I get home from college.”

As usual, Jyoti put coconut oil on Tanmayi’s hair and divided it into two plaits.

Tanmayi recently bought two dark-colored ready-made Punjabi dresses on the street.  These dresses are perfect for Tanmayi who always wears Parikinis sewn by tailors.  She took out a red dress and put it on.

While passing the college gates, she was surprised to see a familiar face there, and in fear, she kept the books closer to her heart and went inside without at least greet him.

She went to the classroom and poked her head in the books, but nothing seemed to be heard.

“Why does he come here? Did he come to find out that the letter was not replied to? If it’s revealed all this at home now, um! Is there anything else? He should have been told not to come like this before. If I say that, he will be hurt.” She is thinking vicariously.

“Whether he likes it or not that’s not a big issue, she should tell him that she doesn’t like this kind of visit.” She dashed out of the classroom taking permission to clear up the case.

He was still there as expected, but this time he found hunching on the bench and staring at the gate.

He saw her coming out and walked towards her.

He smiled casually and said, “Are you fine?”

When Tanmayi was about to say something he broke,

“Father often comes to buy feed for the chickens sold in these surrounding villages. Now I have taken the duty. As I came anyway, I thought it would be nice if I came to see you once,” he said, “I will come…” saying that he took leave without waiting for an answer.

Tanmayi felt relieved because it is not as complex as she thought.

“He wrote a letter saying that he liked you the other day, now he came to see you. And what tomorrow…?” everything is open to him. Vana said quizzically, raising her eyebrows.

“Seeing these tight coconut oil braids and my loose Punjabi dress, I hope he will never come again,” said Tanmayi, but she thought it would be good if he comes again.

That evening, she posted the letter.”

I read your letter a hundred times in the morning white moon sheen.  Your words “I like you” are forever imprinted on my mind.

Can I tell you what I like?  I like the garika flowers that wink at the wind on a snowy morning and the Deva Ganneru flowers in which all the beauty of the world is woven into each flower. I like the nebulas that stand like drops of pearl on the petals of rose flowers.  Most of all, I like the December flowers when the stems are full of pale purple in the soft warmth of winter.

You are so lucky! You are in the presence of the Godavari which wallows on your feet.  If I have such a chance, I will join Godaramma in my heart!  If you don’t like me calling you “Shakku”  you tell me. I like to be called cute names.

Yes!  Did you know that I’m scared when you suddenly appeared that way? My heart is thumping fast to see you again… But the fear of the world keeps me back. That’s why I couldn’t say anything. I’m sorry, won’t you forgive me?

In another letter, some more!

Soon after posting the letter, it was very difficult for Tanmayi to keep waiting for his letter. She kept a copy of her letter so that she could read both of them by keeping close to each other when the letter was answered!

The long-awaited letter finally came in another fifteen days. After coming back home from college, when she was washing her face, Narasamma brought the letter secretly and gave it to Tanmayi. Tanmayi looked at Grandmother in surprise and hid it from her mother who was coming there.

Tanmayi tore the letter with faltering fingers and looked eagerly at what it was written.

“I could only understand half of your letter, half of it I didn’t. The important thing is that I will visit you again next week. This time I will come to your home.”

When she saw these two sentences, she was greatly disappointed.  Looking at it she said to herself, “Is this what I expected? nothing has responded to my letter!”

That evening, Vanaja compared the copy of Tanmayi’s letter with Shekhar’s letter and said, “If you don’t mind, I want to talk about your letters, both are as different as hell and heaven” She added smilingly.

“I am not surprised that he did not understand your letter”

“Do you mean he is not suitable for me? ” She said a bit angrily,

“If you don’t get angry like that, I will tell you one thing! There is nothing wrong with liking him. But it is wrong to imagine that he will have your heart,” Vanaja said thoughtfully.

Let aside all such things! A new issue is just surfacing. He wants to come again. I do not understand what his intention is for coming here. Tanmayi held her head in a distressed mood.

Let him come, he needs to understand the customs of your house. A relative of this house may not look strange here perhaps, he thinks of something like that” said Vanaja.

On the day Shekhar was supposed to arrive, around 2 am Tanmay’s heart started beating fast. In college, she could not get anything into her mind.

She took leave and came home saying that she had a headache from the afternoon session. She kept silent not talking to anyone and tucked in a blanket.

Jyoti who saw this came to her and placed her hand on her forehead when she saw that Tanmayi, who was always active, was not talking to anyone and was sleeping with a blanket on.

Tanmayi was starting to feel a headache from the conflict that was raging in her mind, but now and then she was alarmed if there was any screech of sound outside, expecting his arrival.

Tanmayi’s father Bhanumurthy said, “Jyoti, look, the boy has come.” listening to this

Tanmayi jumped out of bed and ran into the bathroom.

When she came to the hall adjacent to the front room, she hid behind the door when she met Shekhar’s eyes, looking at her while talking to his father.

Narasamma came to her side as if she understood something, “He seems to have come for you” she said with a giggle.

Tanmayi stood looking right at him and looked him in the eyes. He is still looking at her.

Jyoti, who saw Tanmayi loitering in the hall, asked her holding the tea tray, “Will you take it?”

Tanmayi nodded and took the tray, happiness bubbling up inside.

“This is our girl,” Bhanumoorthy introduced to Shekhar.

He looked up and nodded, “I saw her at the wedding sir.”

Tanmayi did not get a chance to speak a single word.

Tanmayi realized that no one in the house believed him when he said that he was coming to that town on business.

Another hour after he left, Jyoti came in seriously, asking Tanmayi,

Tanmayi looked at the ground confused and did not answer.

In her voice, there was a sound of authority and a hint of doubt at a stranger’s sudden appearance. She insinuated her daughter’s involvement in it.

Tanmayi did not know what to say or how to say it.

Meanwhile, Narasamma came from the kitchen and said, “What is wrong with it? After all, that boy is in no way alien to this family, he is the son of our Devi. When I saw him at the wedding that day, I told him to visit us when he happened to come this way.” she said.

Jyoti looked at her grandmother seriously and left by saying, “Don’t spoil your granddaughter first, and then above all, advise her to be attentive in her studies, stop those crazy thoughts at once!” She scornfully looked at Tanmayi and walked away.

Tanmayi didn’t understand what she did wrong. She didn’t have the courage or opportunity to talk to mom and dad.

Tanmayi went to Vanaja and broke down everything before her about what had happened at home.

“Uh..it doesn’t seem like they are reacting so positively in your house. If they know that you are writing letters, they will get even angrier. You better write a letter to him not to come to you like this” Vanaja said consoling her.

“What if we call Dhavaleswaram, to his friend’s shop from your house?” Tanmayi said thoughtfully.

“Oh, No! STD call means it’s very expensive, they kill me once the bill comes! Give him a telegram,” said Vanaja.

After receiving the telegram, there was no response from him for two months.

Tanmayi calmed down a bit. But thoughts about him are not leaving her.

In the summer, after the completion of her intermediate exams, Tanmayi went to Vanaja, and when she came home after her visit, she found the house to be full of bustle.