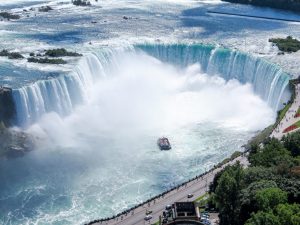 We had been wandering outside in the Niagara cold and snow until midnight the night before, so we could not get up at all the next morning.  If we had come on our own instead of the bus tour, we would have been lazily laid up till the afternoon. The bus journey had its strict norms to keep up. Anyway, we have to get on the bus at six o’clock by any means as if there is an alarm bell. The next step was to get the children up at five o’clock, and they were ready without any demands.  There is no time for breakfast, our guide told us that they stop for brunch at eleven o’clock and suggested that we have some light snacks. The kids were delighted with the chips, and we ate some fruits.

American Falls: As our bus passed the cold and white snow roads, the first stop was at the “American Falls” that we had seen the night before.

During the night we couldn’t understand the location clearly, but when we saw it in the daylight, a stream of cold smoke drifted off the snow lumps soaking the fencing a foot away.  Even at night, the whitish snow runs towards the waterfall with its magnificent cascades, cutting the edges of the crystal clear snow boulders, I felt I must dash to the waterfalls at once.

Apart from the streams that rush past the ears and seem to be reachable at a distance of a stretch of hand, yet, the water below is completely invisible from here.

While coming out, the children start running crisscrossed in the snow instead of walking with us. It was a joy to see people walking happily, throwing ice cubes with their hands.  Noticing the snow the night before, we too were ecstatic and couldn’t help controlling ourselves and started playing in rapture.

Horseshoe Falls: After traveling for ten minutes, we were taken to “Horseshoe Falls”, another corner of Niagara that we have not seen till then.

Niagara State Visitor Center is located at Horseshoe Falls.  First, they took us to the “Niagara Falls Adventure Movie” in the theater on the first floor.

This was a wonderful documentary that mainly covered the history of Niagara, the features of the first human sightings, and the adventures across Niagara, from an adventurous man who walked on a tightrope across both banks of the gushing Niagara, to an old lady who hid inside a big drum and survived the fall in Niagara, and other breath-taking scenes. The documentary was very interesting. We were mesmerized for about 45 minutes.

Walking through from the back entrance of the Visitor Center, after one hundred feet, we reached Horseshoe Falls. These were also flowing down the walking path making the onlookers a great eye feast.

But these are larger than American Falls. Many twists and turns, breaking through the ice, expanding as far as the eye can see, and drifting to the underworld, cascading downwards, everything crystal clear white.

Some imperfect, a few perfect.

There they built a stretch structure over the waters, a “tower viewpoint” so that the visitors could watch the invisible Falls. We got two upstairs by lift there.

As it was extremely cool during the winter, the places seemed entirely lonesome, and very few people were seen around. We and the travelers on our bus crossed the bridge through its watery floor.

Niagara Falls-Tower Bridge: A short walk on the bridge took us to the sight of Niagara Falls…As if the Ganga, spreading its arms dipped in the light blue color in the eyes of the clouds burst, the thick water flowing downwards from heaven to earth, emerged there.  Even if you wear tight winter coats and gloves and walk around warmly, your heart shivers with delight at its exquisite beauty. Some artist with his deft strokes on the canvas might have erased the snow-colored lumps here and there, made them into black stones, and then seriously covered them with water masks.

The coast towards Canada can be seen leaning against the edges alluring us. Right behind the waterfall, the “Rainbow Bridge” that hangs in the air connecting the two banks was truly beautiful like a rainbow in the morning sky, most magnificent on a cloudy day.

Tower Bridge is simply not a place of sight to see, but a place that you can’t move from there. Niagara was the place I was most excited to see on this trip. My childhood dream of seeing Niagara has come true.

Even though the bridge was empty, the bus crew was so hasty that we had to move from there. But our eyes are stuck there. All those scenes are still vibrating around our eyes. Though my favorite places in America are ever-changing in the priorities of the top in the list, Niagara is the place that leaves a lasting impression after all the others.

As we went there in winter, we couldn’t go to “Goat Eye Land” there. Niagara “Boat Tour” was not available then, and “Whirlpool State Park” and “Historic Fort” were not on our tour list. Yet, every moment from the night before to eleven o’clock that morning remained an incredible experience.

The sadness of not being able to leave the area that you love so much is altogether like a completely cloudy day.

There was no sun anywhere along the way. It was the same as it was when we woke up all day long.

As the bus was crossing Niagara I said, “We must come again”

Perhaps I spoke out involuntarily.

Let’s go to Canada and see it when we come next time. Komal and Varu are chatting with great enthusiasm while Siri is busy standing behind their seats playing with their hair.

At the sight of Chinese food, children ran back and started saying that they were not hungry.

We bought and ate a few pieces of bread and fruit. The guide said that the bus won’t be stopped till evening.

Within ten minutes of departure, Varu and Komal fell asleep and woke up only after the bus stopped.

Siri, however, did not sleep and enjoyed the moments.

Niagara to Boston: On the return journey, the bus operators gave us the option to move from the back seats to the front. We decided that the back seats were good for Siri for her jumping and playing. As some of the people who came with us on the bus went back, they took another ten people who were coming to Boston from another bus. All those who came this time were Tamilians. As Siri went there and introduced herself to those people, I  had to go there, and soon we all started chatting together. They said that a girl in their relatives looks the same as me. All the brothers and sisters of the family came from India, to see America with their younger daughter who stays in New York. They said that  because of jet lag they are still feeling it whether it’s a dream or hallucination.”

As all of them were talking loudly on the bus, the silence was gone and the bus came to life.

The bus crew served a grand bill including all the extra expenses incurred until the next evening, and with the tip to the bus driver and the guide, moreover demanding in “Cash.” We argued that that much cash cannot be “drawn” in one day. There were half as many people as us on the bus. In the middle of our journey, whenever they found an ATM Center they stopped the bus and asked us to draw the money saying, “Here you can draw money.”

Even though Satya was annoyed, I couldn’t help laughing at them on the bus. All the cards available to us were used to draw the money and given away to them.

Boston is about 500 miles from Niagara. Approximately it is an 8 to 9 hours journey. After a hundred miles of travel from Niagara, the whole snow has vanished.

The weather was suddenly different as if we had never seen snow after we crossed the last snow-filled road.

“Grand Lobster Dinner”: We arrived in Boston at 10 pm.

They took us to a “grand lobster dinner” at a grand Chinese hotel.  The ingredients there should be served and eaten on four or five plates which are placed on the table instead of a buffet.

I lost my appetite before seeing them all. We didn’t know what to eat as nothing tasted good.

Siri bit everything and spat. Varu just kept a bowl of white rice before her and started eating the rice with two sticks.

Tickets to the dinner are $20 per person.

No one could eat properly despite spending a hundred dollars.

This type of food made us sick throughout the journey.  We had been traveling for days and we were impatient when we reached the hotel. And the food was unfit for eating every time.

“Boston City Tour” at six in the morning…said the guide…When I was going to say that,

Varu started crying saying, “Mommy, getting up so early and walking around all day…how many more days is this tour?”

Though I said it is “just two more days,” she doesn’t stop crying.

Unfortunately, children were great sufferers on the trip. However, we should have to complete the entire trip once we booked.

I should be energetic before everyone else. I am indeed the tour negotiator and also a mom to kids, so I don’t show any dull moments. Either because of that or because of my natural wanderlust, I never felt tired at any point during the week-long tour. I was walking around with great smartness, leading them all.