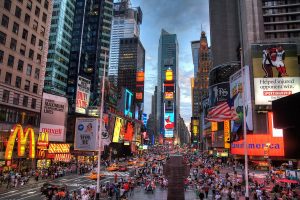 We visited Boston the whole morning and after lunch, we traveled back to New York.

It was drizzling all over the way. The return journey from Boston took about 4-5 hours.  After a five-long day trip, the happiness of relieving ourselves from the bus was visible on the faces of the children. We had to board the San Francisco flight the next day. Tonight we went back to see New York, and we only have a limited time the next morning. We changed to another bus on the outskirts of Boston. We fared goodbye to our South American friends who had accompanied us all the while.  All the anguish about the trip with small kids for the last five days that I felt before the journey has gone away. While the bus was leaving Boston, the children fell asleep here and there. It should be mentioned here that the difficulty I felt in changing Siri’s diaper during the journey. During the entire journey, Siri created a fuss on the bus at least 4 times. I don’t know how I managed to hold her with the help of Varu in that small washroom, located at the end of the bus, fit for a single one while changing her diaper. The filthy smell of urine in that cabin used only by the driver in an emergency is outrageous. Bus journeys are very troublesome as they cannot stop the bus wherever the passengers need to be accompanied by children.

It was 6 pm when the bus got off at the destination in New York. As it was Winter the night started early. Nobody wanted to go back to their rooms to snooze. As everyone wished to go out for dinner we decided to go directly to Times Square and wander there for some time under the lights.

New York Subway:- This time we bought tickets to travel completely by public transport in the underground train “subway.”

Even though we were tired out all day, we wanted to move voluntarily in the New York subway.  Since the airport is close to our hotel, taking the airport shuttle is less fare than taking a taxi from our hotel to the subway. Moreover, there is subway connectivity through the airport, so we started our journey there. The New York subway, like most major cities in the world, is huge and older than most cities. It is the largest with a total of 468 stations and 24 subway lines. To look at everything in one night, we wished we would have some lotions on our feet to simply walk away in the air in the subway! Though we watched as part of the New York City tour bus journey, we thought of making a station-wise list of those who still want to see the places. The convenience of the subway is that it is cheaper and faster than taxis.  A ticket to any destination is $2.50 one way.  But for that, we have to pay for a MetroCard. It costs $2.75. 25 cents remain each time in it.  Normally you have to buy a round-trip ticket so if you recharge more than 5$ dollars you get a 5% bonus. That means if we recharge $20 for example, we get 21 dollars to use.  But here’s a hitch. It costs $2.50 every time you board the train. Even if you board and get down four times, 1 dollar will be left. Until you recharge again, that $1 will not be used, and you must recharge $5 every time.

“What will we see at the site of the 9/11 incident?  Moreover, to go inside the 9/11 memorial, one has to take “visitor passes” first,” said Satya. Not for that matter what he said about it, but what do we see there?  What do we see around the fence of the vacant yard there? And the miserable cries of the helpless creatures from the towers collapsing?  Memories of those 2983 people killed in the tragic episode!  What will we see?”…..I said that I don’t want to leave New York without seeing that place. I drove all of them first towards there. At 8:00 PM, my heart was pounding as I turned the corner. A large black square space- fenced around with cloth hedging nothing can be seen. The 9/11 Memorial Building is on one side, and inside that, the two World Trade Towers were left empty, the four-square reflecting pools, the names written on the banks… nothing, nothing I could see!

However, I was able to get to that compound wall point. Why? I don’t know! Indescribable feeling. My heart silently wept and prayed. When will men in the world learn peace and non-violence? Not only the sufferings of those who died in the accident but also the lives of many Afghans who were buried in the terrible terrorist oppression due to that incident moved in front of my eyes. I remembered the war flights from America bombing Afghan lands. Everything came to me graphically how those miserable innocent lakhs of Afghans scattered to various places.

In One World Trade Center, the “Freedom Building” is built like a Memorial Tower. Twin Towers are the two tallest buildings in it. In total sixteen acres of land and two world-famous buildings were destroyed including the 5 other smaller buildings.

There it was biting cold in the atmosphere outside.  However, we wanted to see something around. We couldn’t see the World Trade Center properly, as it was very difficult to walk through the small alleys between the tall buildings under those dull street lights. We started walking with the children in the cold to Subway and we reached there in another half hour.

Time Square:- It was almost 9 when we reached Times Square. We got a bit confused as we didn’t know where to walk after the subway station. Crowds of people moving in and out in all directions, vendors selling chicken kebabs and pretzels on carts even in that shivering cold. All those vendors of the carts looked like Indians. I asked a cart man, “Are You an Indian?” He said, “No, I am Bangladeshi.” When we reached the Times Square surroundings, everyone was very hungry. We bought and ate whatever we saw along the road, like a kebab stick for $5, and a hot dog for $5, etc. I went and asked some people crossing the road near the intersection of the roads who were collecting money, where exactly “Times Square.” was located. He pointed forward and said, “The whole Square between the roads seen from here.” He took the dollar I gave and said with a chuckle, “If you don’t know the way, come again and ask me.”  He had a crumpled old cold coat on his black body, and his hands were bleached from the cold because he didn’t wear gloves and shoes.  Such people were seen everywhere around.  On the side of the road, the people who sell T-shirts, glass figurines, hats, and purses made in the style of New York’s main features were all sitting on the platform regardless of the cold. On another side, Times Square is lit up with dazzling lights, music, big live digital screens, and billboards, and the hapless people on the other side, like in every affluent society throughout the world, in those miserable conditions, just for a living, struggling to fill their belly, moved me.

Children galloped briskly on the stage scrambling red stairs between the roads in Times Square. I sat down on the stairs and observed the people around me. The happiness of the children is beyond words. I felt how innocent the world of young children is, urging them to buy whatever they encounter around there without caring about anything. I no longer felt the need to recline in any stall or restaurant around for lunch. We were fascinated by the rays of light as if some kind of festival was going on. Until we went a little further away from the place where the people were bustling about, no one felt steady. We enjoyed dinner that night with pizza at the pizza place, dry fruits at the ice cream shop, and cold yogurts with fresh fruits.

As soon as we stepped out of the shed, we felt altogether bone-chilling cold and the whiff outside was outrageous. But we had to go on foot to get to the station, and another hour to reach our hotel. On the way back, the kids fell asleep on the train. Varu on one side and Siri on the other side on my shoulders.

I forgot to mention one more thing while talking about subways.

Unhygienic conditions are more prevalent in subways than on city streets. When going down the stairs, and in the elevators, we felt an intolerable filthy odor. It’s observed that some people were found taking the tickets, and some people just simply jumped up the fence. On arrival at the entrance, two to three people asked us for the tickets with the remaining balance, and they sold them to the people who were going inside. I felt things are the same everywhere if people are flocked, even in great cities like this. We avoided the idea of ​​going to the airport by subway that night. We reached the hotel before midnight and fell asleep.

I love New York:- We had a return flight the next afternoon. But we had to check in at 11 o’clock.  After waking up in the morning, we had breakfast at the hotel, booked the airport shuttle, and left. This time we all wore “I love New York” shirts. All the people who saw us wearing those shirts greeted us with a smile on the way. When the children got ready for the return journey after a six-day trip, they were greatly relieved from the homeward sickness. When the flight rose into the air and turned and traveled in the west direction, it was seen from the window that it rose half up in the sky towards the lower land.  Our flight entered the cloudy white streets with memories of New York City’s skyscrapers chasing after them. About 6 hours later, Varu ran out ahead of us all, shouting “Home! Sweet home!” while landing in San Francisco.