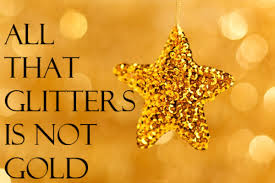 All That Glitters (Story)

Mohanarao, who was relaxing in an easy chair threw down the newspapaer he was reading and closed his eyes desperately .

His eyebrows got knitted hearing his wife’s curt and blunt voice calling his daughter “ “Hema where are you? Why can’t you come and help me? “

The sounds of pounding something and the smells of seasoning create an unpleasant ambiance.

The transistor on the table was playing some music in a low key. There was a greeting card with a beautiful scenery and appropriate quotation, on the side table.

It was sent by Ratnakumari, whose signature was there in beautiful handwriting.

Mohanrao got up and stood in front of th mirror. A smile played o his lips when he thought that he had turned forty that day.

His reflection belied the fact. His sharp eyes, smooth skin and

thick curly hair told him he looked like a young bachelor.

Ratnakumari had a fascination for his curly hair. “I envy your hair Mohan “ she would say. When he heard her words of praise his chest would expand. Which lover would not be flattered by his lady love’s praise.

The phone rang. “ It’s me. Did you get my greetings? I called to greet you personally. Wish you a very happy birthday “ Ratnakumari’s voice sounded sweet.

“ you sound low. Haven’t had your lunch ?” Her smiling voice was like music.

“ OK. wish you all the best.” She said in lilting tone.

Mohanrao sat back in the chair. Sundari didn’t like the idea of engaging a cook.she would slog in the kitchen but could not think of greeting him on his birthday.

Sensing somebody coming into the room, Mohanrao closed his eyes. The door opened and Sundari peeped into the room.

Oh! He is asleep” she turned back with out making a sound.

Mohanrao observed her from the corner of his eyes.

She was short and a bit stout , her skin colour on the side of black. When she walked her toe rings made a musical sound. The bangles on her hands jingled. Her diamond nose ring sparkled.

“Sundari. Beauty is in her name only. She is a country brute. “ Mohanrao gnawed his teeth.

He looked younger to her. Her hair was already turning grey. He felt embarrassed to introduce her as his wife. She had her litter of five children following her.

“ you see ! our eldest daughter is almost of marriageable age” she would remind him, as if she wanted to make him a grand father at this young age .

His thoughts went back to his college days.

Ratnakumari was so beautiful in those days that she was called miss college. She was tall, fair and delicate and had attractive eyes and long hair. Mohanrao was her great admirer and was lucky to have won her friendship.

They had a whale of time going to parks, cinemas and long walks together. On occasions When she complemented on his dress sense,or smart appearance he would celebrate with his friends.

One fine day when he broached the topic of their marriage, Ratnakumari, who had been engaged in a lively conversation with him till then ,laughed at the idea.

On his insistence she told him she had no idea of getting married so soon and be confined to marital imprisonment but wanted to have fun in life .

Thus she got rid of him as easily as she dusted her hands off the sands in the beach.

Mohanrao was so shocked and disheartened , that he just obeyed his father and tied the knot to the girl selected by his parents. That was Sundari who brought a heavy dowry with her.

Mohanrao woke up from his reverie.

Sundari tapped on his shoulder to remind him it was time for lunch. He was disgusted to notice her unkempt hair, rough hands and sweaty face. She lost most of her hair due to successive childbirths.

He got up without any enthusiasm, followed her and sat on wooden plank in the kitchen. In one corner there was a broom, in another some pots and vegetable baskets and six of them were going to eat there.

If only Ratnakumari were to be the hostess here, they would be sitting at a dining table ,he thought.

Sundari was insisting on his eating more sweets and tamarind rice in her usual rugged way.

If Ratnakumari were in Sundari’s place, she would have offered him a second serving in a delicate manner saying “ don’t you want some more vegetable rice ,dear? “

Mohanrao got up from his seat abruptly, washed his hands and exited the room. He was repenting for his hasty step in getting married to the girl of his parents choice.

In the evening he met Ratnakumari in the ice cream parlar.

“ just taste this “ the man with her was cajoling her.

“ you are pampering me dear” she cooed coquettishly and obliged .

He squeezed her shoulder delicately as if in appreciation.

When Ratnakumari saw Mohanrao , she greeted him breezily “how come you are here”?

Mohanrao sat in front of her and queried “who is this?”

“ A friend like you are, but not as timid “ Ratnakumari smiled .

Mohanrao was captivated by her smile. Her even teeth were competing with the pearls around her neck.

“ Don’t devour me with your eyes man. Why didn’t you bring your wife? “ Ratnakumari raised her eyebrows.

The thought of of the six layered old fashioned gold chain Sundari wore, brought an unpleasant expression on his face.

Ratnakumari’s lipstick -quoted lips matched with the colour of the red bindi on her forehead. Her cheeks looked like soft rose petals.

She wore a wristwatch on one hand and the other was adorned by a single bangle.

In her sleeveless blouse and nylon saree, with her hair knotted high and the single layer pearl chain around her delicate neck, Ratnakumari looked like an angel who conquered age.

All the time her friend’s hand was on her shoulder. “ Meet Mr.Murthy, my husband’s partner. She introduced her friend.

“ Oh.Is your husband out of station? Rao asked.

“ Oh. No. He had paralysis and has been in the hospital for the last fifteen days.” She told him in a casual manner..

Rao was shocked to know that she was having good time while her husband was in the hospital.

“Won’t you take care of him during nights? Rao asked.

“Oh! Man, I can’t wait on a patient.It makes me sick. I hate hospital atmosphere.” She dismissed the topic and turned to Murthy “where shall we go? Park or movie?” She asked him.

Somehow Rao neither could appreciate her beautiful posture nor her her attractive eyes.

Murthy responded enthusiastically” first to the park and then to movie.”

“Are you coming Rao? “ she queried.

She was surprised that Mohan rao was not pleased with the proposal.“ I have to go home.” He said.

“ Oh.You want to spend the evening with your wife and kids! come on we will drop you on our way . “ She smiled .

In the car Ratnakumari sat in the middle, with both of her friends sitting on either side.

The touch of her shoulder irked Rao.He noticed that her other hand was in Murthy’s lap.

Rao felt uncomfortable sitting there and heaved a sigh of relief when he got down at his residence.

He was pained to see the heartlessness that lay beneath her beauty.

‘If he were to be in her husband’s place,and hospitalised, she would have gone out with friends to have fun.” This thought disturbed him.

He remembered the time when he fell ill for four days, how concerned Sundari was and with what care she looked after him.

‘Even when Sundari had gone to her parents house for delivery,she would rush back with in three months saying hotel food didnot suit her husband . Sundari’ world consisted of her husband and her children” . he mused.

Rao’s daughter came in to remind him it was time for dinner. “ have you children had your dinner? He asked.

“ All of us except mother. “ the girl replied.

A smile played on his lips when he realised that it was always so.

He went into the kitchen and sat down on the wooden plank.

When he was about to eat,he remembered he didn’t eat the special rice she cooked for his birthday and asked for it. Sundari was quick to serve it.

Then he observed Sundari was looking dull and exhausted . When he enquired ,she just smiled.

His daughter came out with the truth. “ Dad! Mom ate just curd rice for lunch because you left without eating the special food she made for your birthday. That too on our insistence.”

“ Syamu! get another plate for mom.” He called. Then he served food and offered it to Sundari saying“ you eat with me or I I will not have dinner today”.

Syamu clapped her hands and supported her father “ you did the right thing dad”.

Sundari obliged him with no further argument. Mohanrao felt happy.

After the children went to bed Sundari came into their bedroom carrying a plate full of betel leaves and crushed betel nut . She was in a white silk saree with golden border and wore jamin flowers in her hair.

“ You still preserve this saree which you bought long time ago.” He observed.

“I know you like this one, so I use it occasionally.” She smiled.

“ you have been in bad mood since morning.” She observed.

“ nothing of that sort. I have a nagging head ache since I got up in the morning .” He lied.

Hearing this, she was greatly worried and was all concern for him. She touched his forehead and said, “Let me apply some pain-balm .“

Though rao was objecting that it was not necessary, she applied the balm on his forehead and started massaging gently..Her touch was loving and soothing.

He took her hand into his.

Her fingers were not long and soft, nor were the nails painted. But her hand looked beautiful with the the mehendi design she applied the previous night .

He looked at her. Her eyes were full of love for him. There was a soft smile on her lips.

At that moment she did not appear to be a dark skinned, uncouth and uneducated country brute.

With his new realisation, he saw her as an embodiment of love, personification of maternal affection and a devoted wife.

Holding her hand, Mohanrao went into an introspective mood.

‘Gold, though it is covered by dirt, does not lose its value. Pebbles and precious gems may look alike. One should be able to discern a stone from a precious gem. ‘He mused.

“Are you surprised to see my new bangles? Aren’t they shining like real gold bangles? Don’t be carried by their appearance . They are not gold but gold plated bangles. I bought them just to see how long they last.” Sundari smiled.

Mohanrao suddenly remembered the oft quoted statement “ All that glitters is not gold” .

True. ‘All that glitters may not be gold’ he repeated to himself and smiled at his wife.