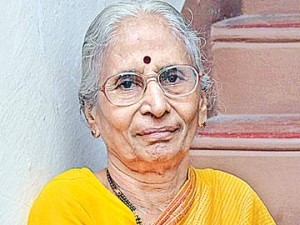 “Hello grandma. How are you doing? Have you been talking to the sea of late?”

“Yes, of course. You know when I was young, I had to go a town 200 km away from my home to join as a lecturer. Till then we were living on the sea shore in a town on the northern coast of Andhra Pradesh and when I had to go to this new place, I used to feel that it was all so unnaturally silent, even if there was a lot of road noise outside. Nights used to be very quiet. I realized I was missing the roar of the sea. It was so much a part of our lives in our formative years. Then I moved to a place still farther away, almost two thousand kilometres away. No one had heard of or seen a sea there. You don’t know what you are missing till you actually move away from the sea. It became a long lost memory, nearly forgotten but trying to pull at your heart strings all the time,” the grandma replied.

“It is actually interesting how you interact with the sea. I also go to the beach every day with my friends. I eat chaat, chat with them for some time and come back. Your companionship with sea is different…it is amazing,” marvelled the young man.

“It is true of any water body- whether the sea or a flowing river or a still lake- they all document history in their own unique way. They witness what goes on in the cities and civilizations around, silently standing testimony to the changing times. Today I will tell you the story of a young couple who have grown old, gone through life’s turmoil and though resigned themselves  could not leave their attachment behind and move on along with changing times and situations.”

Malathi Chandur, a writer of the latter half of 20th century was born in 1930 in Nuzivid, a small town in the Krishna district of Andhra Pradesh. After going to primary and middle school in Nuzivid, she went to Eluru in West Godavari district, where she stayed with her uncle and future partner Chandur and completed her higher secondary education. While in Eluru she had the privilege meeting eminent writers of the day like Sri Sri, Chalam, Viswanatha, Krishna Sastry and Nanduri as there was an office of a literary magazine close to her house. After high school she shifted to Madras, which is now called Chennai, with Chandur and lived in Egmore. In Madras too her association with writers continued as she met Achanta Janaki Ram, P.V Rajamannar, Janamanchi Ramakrishna and a host of others. She became a prolific writer here. She became popular because she started regularly contributing feature columns to various magazines. Most of her writing appeared in print regularly. She ran a column called Jaabu-jawaabu (Letters-Reply) and Prasna-Jawaabu (Questions and Answers). These covered a wide range of topics starting with personal, social and psychological issues. For Telugu readership she introduced a number of good English novels in another column titled Paata Kerataalu (Old Waves). She introduced translated fiction in another column of hers. When she turned to her own fiction writing she was already popular. Renuka Devi; Atmakatha (1955)), Kanchana Mrugam (1966),Vaisakhi, Manasuloni Manasu  Aalochimchu  Emiti Jeevitaalu?  (1981), Bhumi Putri,Madhura Smrutulu, O Manishi Katha  Shataabdi Suryudu  Shishira Vasamtam, Hrudaya Netri  are only a few of her novels. She had written about two score novels in addition to translating Jayakanthan’s Tamil novel into Telugu Konni Samayaalo Kondaru Manushyulu (Certain People in Certain Contexts). She authored a number of short stories and the story Daba Illu (Terraced House) is one such short story. It is rather unfair to introduce her with this short story as her writings are many in number and their impact was huge in the times she had written.

The story is being narrated by a girl (the writer herself, we presume, as she is named Malati) who is on a visit to her sister’s house in a village like place in Khairatabad. Within six months her sister and brother-in-law are transferred. In front of their terraced house, which is very comfortable inside, in that gully, there is a thatched hut in which a couple Rajayya and Balamma live. Their hut has a front yard which is neatly polished with cow dung. The story opens with the narrator’s complaint against the couple. Every day at 6 O’ clock in the evening she goes to the terrace to enjoy the weather and read a book. At the same time Rajayya puts his gramophone on in full volume. Then Balamma has her own complaint against her husband. As the gramophone blares the song, same song every day ‘Aaye barsaat mein’ she shouts at him louder than the player. ‘Idiot, put a Telugu song’ He changes the song to Telugu after she curses him for giving away all the money to some fellow, ‘Radey chelee, namma rade chelee’. She uses this charge as a handle to make him do her bidding obviously. Ever since she came, she has been hearing the same worn out record every day preventing her from reading her book. She was upset with this couple. Her sister, on the other hand, is not so bothered as she is busy cooking at that time. The record, Balamma’s curses of Balayya and whosoever has cheated them, along with the noise of the chicks made reading impossible for her. She cannot enjoy the distant glittering Banjara Hills either. By the side of their house she saw two huge rocks one on top of the other precariously placed, that was another disturbing and scary sight for her.

The cleaning tasks in the house were given to Balamma and Rajayya. She used to feel it strange at the sense possession with which Rajayya and his wife used to clean the house as if it was their own. Both of them did cleaning and dishwashing tasks. Every day she used to sweep the front yard and sprinkle cow dung water. It was considered hygienic as it prevents flies. She used to draw nice and elaborate patterns on the floor with rice flour called muggulu. In the North of India, they are made with coloured chalk powder or flower petals and called rangolis. Every house in south India considers it auspicious to have these muggulu. Rajayya and Balamma were always treated with great respect by Malati’s sister and brother-in-law which used to annoy her. Once when she was trying to fix a decorative piece on the wall and started hammering a nail, Rajayya came running and shouting at her asking her not to fix a nail as it damages the wall. Without thinking she replied to him “None of your business, after all you are not the owner. You are only a servant.”

Shocked and hurt Rajayya withdrew into himself. Both her siter and brother-in-law heard the commotion and on Rajayya’s complaint found out what happened. She was stopped from fixing the nail which upset her.

After four days same scene outside Rajayya’s house but there was no gramophone and he was silently smoking a cigar while Balamma was crying bitterly cursing someone. As soon as her brother-in-law came Rajayya asked him ‘Sir, today did you pay him the money?’ he responded saying he did pay the usual 75 rupees. Balamma resumed her crying. She did not understand their grief and that night she was told by her sister and brother-in-law that Rajayya and Balamma were in fact the owners of their house. When they came initially it was dream to have their own house. Both Rajayya and Balamma were married when they first met. But she fell in love with him and came to him leaving her husband and brought all her gold. He too left his family with two children and they settled here and bought this small plot. Every day both of them used to work as construction labour and earn money for survival. They kept 60 rupees separate and during night brick by brick they began building this house. They used to get free sand and they used to carry limestone every night from the street end. Their money was finished when the walls were raised to half the length. He began to borrow money from a lender. While working in the neighbouring houses during daytime and building the house during nights they finished the house borrowing money. They white washed it with their own hands. They gave the house for rent and it was paid to the lender directly. But as luck would have it, he was injured on the site and was bed ridden for three months. She could not pay the interest to the lender as agreed as she had to earn for their survival and his medicines too. As per the agreement since he could not pay the money lender showed the agreement to people all around and confiscated the house. They lost the house and got twelve hundred as compensation with which they built this thatched hut and started living here as they thought they should at least be living in the shadow of the house if not inside the house.

Malati was moved to tears and found their records no longer a nuisance. The tears that dried up in their eyes were reflected in the rain  song celebrates. She did not resent their possessiveness or presence in the house.

The story presents the sad plight of the couple who had big dreams and pursued them till the end. It is not just poverty that is highlighted in this story. Story is also about dreaming big, working incessantly to realise one’s dreams. And the equanimity, with which they accepted their misfortune despite not being able to forget their hard work that went into to building the house, which had their sweat and blood in its foundation. It was like losing a grown-up son and living in the memory of that lost son, lost dream for the entire life. Broken record worn out and oft repeated was in fact their shattered dream. Gramophone is now a thing of the past; many music players have come afterwards. Audio tapes, two-in-ones, and CD players. Now even they are gone. Old order changes, making place for the new. But the bittersweet heartache that an old system brings in, is irreplaceable. Like a dream lost and gone, now only a sad memory.