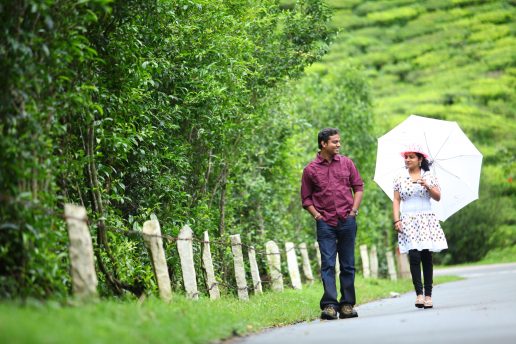 July 20, 2010: The same day, two years ago, something exciting was about to happen. It was just another railway station situated in Thrissur, the culturally rich city of God’s own country, Kerala. But from that day,  it became something more than that to me.

Netravati Express, 6345- For those who travel frequently by long distance trains, especially Keralites, this name would be familiar. That day, the train was on time- 1.05 p.m. With chattering passengers, S10 was filled with warm talks and stories of those who were mere strangers till the day before.

Sitting near the window (my ever-favourite seat in the train), I watched the green meadows pass by. As the breeze kissed my cheeks, I remembered him, those talks, those wonderful moments. With the rattling sound of the engine, I sang one of my favourite songs …“Ek din aap yun humko mil jayenge…yeh socha na tha …”.But, why was I singing when nothing existed? I was not supposed to think about him. He did not care for me nor did he call me. Doesn’t he care about me as I think?

Boarding the train the day before, I was very much excited, with the mere thought of travelling in the train and moreover I wished to see him. The one, who captured my thoughts and was the cynosure of my mind for a year. Well, it was not just an usual year of love, it was an year of pure love unexpressed from my side and over expressed from his side. He was trying to fill my space as well, pouring all the love to make it complete, to make it work. I couldn’t do justice from my side. I loved him a lot but still didn’t want to express it fully.

Being tomboyish by nature, it was not fear that made me hesitate. Always living on my own terms, brushing aside others’ opinions, I was always a rebel. But in this case, the feeling which tied me was something more than that. It was not lack of love or trust. The hiccups emerged from the mere fact that I hadn’t seen him till now.

I knew him, his talks, his behaviour but still I hadn’t seen him. This mere thought created a shiver in me. But his faith, belief in the words, “I want to share my whole life with you and make you my life partner”. It gave love, the strength it needed. Hearing his voice everyday through the phone and getting mails at regular intervals added oil to the fire of love. But one day, a few months back, these very same things gave me the shock of my life.

That day, I can never forget in my life. I got up in the morning at my home in Mumbai, to find no good morning call, no message. I called him back but could hear just the computerised voice that the subscriber is not answering. I messaged him but again no reply. Starting my duty for the day as a trainee journalist for a leading newspaper, the quest for finding stories kept me busy till noon. Once I reached the office, the first thing was to check the mails, but unfortunately no reply from him. A small wave of fear engulfed me. Still I stayed calm, telling myself that he might be busy. As I typed the story for the day, my mind wavered in the midst of the sea of negative thoughts. The voice, the talk, I needed it badly. It seemed like it was gone, all the feelings I shared till now, was it all a prank? Was he gone? Won’t I hear his voice again. But I knew him, he can’t do this to me or is it that something has happened to him? The thoughts lingered in my mind, my face turned pale.

This made my colleagues inquire about my health and I had to tell them the matter. After hearing my tension, they smiled and said, ‘This is such a small matter, dear!’ Well, it was for sure a small thing to fear but unknown to them was the fact that the so-called hero of the story was still just a voice to me.

Keeping it a secret was a decision taken by me as the questions posed would be many. Some would laugh, few would ask whether I am mad to love a person whom I had never seen and many would advise that I am going on a wrong path. There would only be a handful, who might understand me.

But that day, after trying the 25th call, I really got tense. It was too much for me. I sent him a mail again, sounding a bit rude this time. Leaving the office, I did not go home. Loitering in a park, I sat there for more than an hour. Watching the tiny tots play, gave me a bit of peace. It made me think of my mother. With no other way, I slowly walked towards home.

As I was crossing the road, the phone rang ‘Aao na..’. This was the first time in my life that I was so happy to hear it ring. Standing in between the road, I was literally crying. Controlling my tears, I took the phone and it was HIM. His voice had the same tension and love, which made me smile. He forgot to take his phone from home and got held up in an official meeting. I wanted to shout at him but I was more than happy to hear his voice, which mellowed all my tension, my fury.

Thinking of the incident still gives me goosebumps. That day I made him promise that he would call or message me whenever he gets tied up somewhere. But today, it is the same. I am travelling all the way from Mumbai to Kerala for him and it’s been 12 hours, no call from his side.

I had planned the trip to attend an interview with a publication in Kerala. It was my parent’s wish that I should work in our native place and more than that his presence was the main reason. And yet he didn’t call today. The last time I heard his voice was the day before, at  8 in night, in the midst of a bash with his friends at Bangalore, where he had gone for a two-day official visit from Trivandrum.

It was 1.20 p m and I have left hopes. Somewhere it seemed I was overseeing things or ‘is he not interested in seeing me?’ At 4 p.m., I would reach my destination, Kayamkulam. Talking to him was quite impossible at my grandma’s place. Even after knowing this, he seemed least interested.

As the train started again from Thrissur station, I started turning my pages of the novel. After 5 mins came the shock of my life. I could not believe my eyes, a tall man was standing in front of me and was staring at me. I knew him, I had seen this face somewhere but still he was a stranger. He smiled, came forward and sat next to me. I still could not recover from my shock, this was similar to that face. The face I saw in the mails, the face I saw as a display pic. Oh! It was Him. I couldn’t believe my eyes. How could he land in front of me like this!

He proved me wrong. The guy now sitting next to me made me realise the truth of love, the depth of love, which was much more than what I could imagine. The noise I heard the day before was not of an usual get-together but a discussion with his friends on our first meet, to see me as soon as I step into Kerala. It was a superb plan woven by him, executed with the help of his friends. I stood spellbound at the surprise. I had no words in front of his love.

But he just smiled and said, “See, I came to see you first, ‘Aakhir dulha hi toh aake dulhaniya le jata hai na’. “If I had a ring in my hand, I would have made you mine right away”. I could do nothing but smile. Those first few hours when we met, I couldn’t speak a word. I was dumbstruck and enjoyed the glimpse of his true love for the first time.

It’s been three years now, but still I blush, as those memories rush down my mind.

(As published in the Chicken Soup For the Soul Book Series, 2011 edition!)

One thought on “Netravati Express (story)”