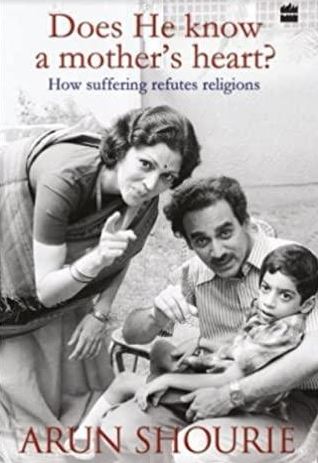 Does He know a Mother’s heart by Arun Shourie

DOES HE KNOW A MOTHER’S HEART – How suffering refutes religions,  is a book written by ARUN SHOURIE. This book deals in detail with the journey of Mr. and Mrs. Shourie as parents to a son affected with Cerebral Palsy. When this book was written Adit was 35 years old and was confined to a wheel chair since his birth. As parents with unconditional love and warmth this couple had to go through a lot of thought processes where there was continuous search for meaning in their lives and  there was also search for the reason behind this destiny. Arun Shourie has done an in-depth study on religion, the concept of God, the God men of our country especially the two noble souls, Ramakrishna paramahamsa and Ramana Maharshi and their philosophies which were a solace to many people seeking truth in their lives.

Adit was a premature baby and due to some problem immediately after his birth he was put in an incubatorm  and there  his brain was deprived of sufficient amount of oxygen resulting in his  stunted mental growth. He had very less physical movement and has to be under the care of someone throughout his life. But he had a music ear, enjoys Talat Manmood songs, understands his parents and tries to be good and give comfort to his parents in his own way. He had loving grand parents on both sides, and they devoted their lives in bringing him up. There was lot of love in the family and he also gave so much of love to others. But his state definitely put a lot of questions on the intellectual mind of the father and he has gone through all the scriptures including Quran, Bible, and Gita to understand the concept called God.  Through the detailed study of the religions Arun shourie could not accept the concepts dealt in the scriptures related to God and his mysterious ways. He gives a lot of quotes from the holy books and tells us how he is not convince and is not able to agree with them  Most of the times he finds them illogical. When his wife Anita also is affected by Parkinson’s and suffers for years beside his son.  Their  family is forced to endure the tragedy and still they sincerely try to understand Gods’ mysterious ways, but in the process are just left with questions unanswered and unattended by all the holy men and scriptures they have come across.

Arun Shourie also in detail talks about Gandhi and his principles of Satyagraha, how he used the concept of earthquakes and natural disasters in his speeches as punishments conferred by the God himself for the wrongs Indians are responsible for on the name of  Untouchability. Gandhi’s response to Hitler’s cruelty and his theory of Satyagraha and the principles of nonviolence do appear illogical in the context. “ If not a leaf falls but by his will..” , if this is the truth then  why is there so much cruelty in the world. Why should God be cruel to deal with cruelty, why should he punish people whom he himself has created as sinners? If what the scriptures talk about God’s anger is true than there can be no other dictator than God himself. How can THE FATHER behave in punishing his own children in such a brutal manner ?  what can be the reason behind it.

Arun Shourie also in detail speaks about the lives of Ramakrishna and Ramana Maharshi and their teachings, and tells us that he was not totally satisfied with their interpretations. They are definitely noble souls but both had very painful deaths. Still they lived on what they preached and were true to the core but even then they could not give answers to many sufferings. Arun Shourie questions “How can we be so sure that while His (God’s) motive is a mystery, then his existence is a certainty? ”  This is a question and he is still searching for the answer….. Maybe God is just an idea to which we give a holy concept and everything concerning him is deemed as pure and holy.

Summing up his findings he shares his experience with suffering. He says the first requisite for putting suffering to work is to shun postponing the effort. The second is to put suffering to work and transforming it into a teacher. The third requisite for putting suffering to work is deep reflections. To think “How may I put even this to work-for others as well as for myself”. We need to Volunteer to help people and work towards making things a little better. Let nothing be a trade because we do not make anything sacred if we are doing it as a part of a trade for returns.

Serving a child in that condition definitely plays a toll on the elders but think If this is what I am driven to just by attending to his condition, what must the poor child be going through?” Suffering is the best teaching material we can get here and make the best use of it to learn. The book ends with Arun Shourie’s experience when he had to leave the house which was thoughtfully planned and built for his family’s comfort due to his son’s medical condition. He says that his son has taught a lesson that problems have to be dealt staying at the same place but change of place is not going to make them go away. So it is always better to be where you are and take the challenges life gives you and deal with them, confronting them with patience and confidence. That can be the only method to live a life to the fullest under severe emotional and physical strain. “As parents We just lift them out of bed and into a wheelchair, They, on the other hand, transform us…..” These children teach us a lot about life and so learn from them and accept them as your teachers who guide you in the path of life.

We speak so much of karma to satisfy ourselves but it we need to suffer then why are innocent children subjected to such cruelty by God himself.  If this is the way of God, then there can be no more cruelty other than this. God is supposed to be our savior, our father, the kindest support we need to receive but in reality there is just suffering on the name of God.  Having to take care of an innocent child who is suffering and knowing how much this  child is deprived and for what is a question which cannot be answered logically. It is really tough to be a parent of a child who is challenged.  Arun Shourie sought answers  for the suffering of his son, and his family but he never was satisfied with the answers which seemed vague and  deviating.

This is a book which brings out all those questions parents of children with special needs deal with and their thought process while they are going through the process of life. Definitely religion can never be a logical solace for all the questions. Blinded faith also wavers when put to severe tests and demands explanation. Human mind asks a lot of questions and many are yet to be answered. This is a very difficult read as it also brings out those questions we fear to ask ourselves. It shatters our blind faiths and connects to our quest for knowledge and we join the author in his search for truth which seems to be a illusion among the practical happenings on this planet. My deep respects to the author for being bold enough to raise the questions and this book definitely help me to view life differently. My views on suffering and the sufferer have altered since i read this.