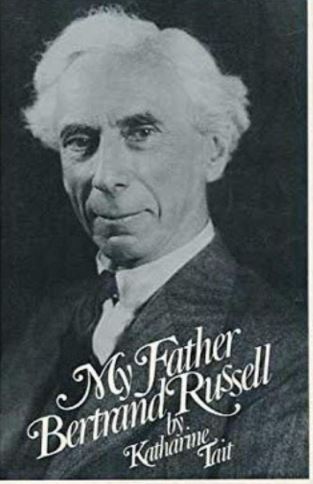 MY FATHER BERTRAND RUSSEL is a book by Russel’s daughter Katharine Tait. Its the most honest book i ever came across about a daughter who was a product of her fathers experimentation, suffered in her own way to live up to his expectations or to understand his attitude towards life, who had no other choice but to submit herself to his experiments and theories and who had to pay a huge price for it. She discusses about herself as Russel’s daughter fighting with the environment provided by him as a father and a man never satisfied with the world around. In an answer to a question “What was it like having Bertrand Russell for a father in the preface of this book she gives this account which shocks the reader for the crude honesty in it..

“We had a dog once, who went on walks with us and chased after rabbits, following his nose. We who walked upright and used our eyes instead of our noses, would see a rabbit run across the path ahead of us, while Sherry running along with his nose to the ground, saw nothing, until suddenly he came upon the delicious scent of rabbit in his path. Being a dog bred more for looks than intelligence, he often went off in the direction that the rabbit had come, rather than that in which it had gone. We watched this performance with lofty amusement,despising the poor dog for his stupidity and his inability to use his eyes as we did, But secretly I identified with the dog and felt sorry for him, the recipient of our scorn. He was not really stupid, only a dog, behaving as a dog behaves.That is what it was like, having Bertrand Russell for a father” …… well… what does that give?

Russell was brought up in his grandmothers house and there though unhappy he tried to maintain his individuality not giving in to the traditional brought up of his relatives. He married Alys who was five years older to him when he was just 21.. But later understood that she was not his kind of woman. He later had a brief affair with Ottoline who was already married and then Colette a wife of an actor. Then he met Dora much younger to him who became his second wife and the mother of John and Katherine. Dora was a strong feminist and together they set up a school basing on their philosophical and ideological ideas where a few other children along with Kate and John were educated. Kate and John never learnt the things their parents expected out of their training. Kate remembers a few methods imposed on them and she says that the challenge was too great, and John learned humiliation and despair, not self-reliance and resourcefulness by the methods forced on them.

Russell never gave his whole heart to anyone. Kate quotes from his biography “My most profound feelings have remained always solitary and have found in human things no companionship. The sea, the starts, the night wind in waste places, meant more to me than even the human beings. I love best and I am conscious that human affection is to me at bottom an attempt to escape from the vain search for God. ” Kate writes “We were not loved for ourselves, but as bridges out of loneliness. We were part of a charade of togetherness acted by a fundamentally solitary person. He played at being a father in the same way, and he acted the part to perfection, but his heart was elsewhere and his combination of inner detachment and outer affection caused me much muddled suffering” She writes about both her parents “Our parents were concerned with the happiness of their children and did all they could to ensure it’. We were not simply means to an end. But we were not to be happy just for the sake of being happy; they believed there were moral advantages to happiness. “Happiness in children is absolutely necessary to the production of the best kind of human being,” said my father… writes Kate.

This is how she sums up his parenting “I did not want to add to his sense of failure. Of course he wasn’t a failure as a parent’ I owe him almost all that is good in me. But he wasn’t a hundred-percent success either, and I couldn’t have told him that without his hearing “failure”. So i didn’t tell him. And we had had a real Garden of Eden, even though the snake had been there all the time”. About her parents school she writes “In the whole of Beacon hill there was no base, and without such a refuge we were forlorn at heart, no matter how sturdily independent and bright we seemed, At least I was.” About her fathers expectations from people she writes “It took my father a long time to acknowledge that he was expecting too much of human nature. “Anybody else could have told me this in advance,,” he wrote later, “but I was BLINDED BY THEORY”

Later Russell and Dora separated leaving the children to hang in between. They did not know how to take this separation. With Dora going on to have two more children and living her life in the way she seemed right and Russell married Peter who was Kate’s governess. Peter later gave birth to Conrad. Kate and John desperately tried to adjust to this change but the loneliness dominated them resulting in psychological disturbances and both brother and sister had a need to take medical assistance.Kate wrote to her father “The real trouble between you and me has always been that you gave me a sense of failure… To be really happy with you, not only momentarily, I should have to lose that sense of failure.it has produced a sort of instinctive resentment. ”

John married and had three children but all through his life he had to fight with his psychological problems draining him an his marriage. Kate married and had two children. She and her husband took to religion and her husband became a minister. Though her marriage also broke in the end she tried her best to live life on her terms.She writes about her father “He had not always been the rational optimist he seemed to me. He had to struggle to keep despair at bay, and the optimistic visions of his popular books had not come easily to him; they were products of the will, maintained by determined effort against the sense of desolation that was always lying in wait for him. In moments of grief or weariness, it could overcome his ordinary hopefulness, and from the mountaintops of his vision of heaven he would plunge to the depths of hell.”

Analyzing her father’s atheism she writers”Christians were mocked for imagining that man is important in the vast scheme of the universe, even the high point of all creation- and yet my father thought man and his preservation the most important thing in the world, and he lived in hopes of a better life to come. He was by temperament a profoundly religious man, the sort of passionate moralist who would have been a saint in a more believing age. Sometime, Somewhere at the back of my father’s mind at the bottom of his heart, in the depth of his soul, there was an empty space that had once been filled by God, and he never found anything else to put in it.”

About her conversion to religion she writes, “When he wanted to attack religion, he sought out its most egregious errors and held them up to ridicule, while avoiding serious discussion of the basic message I found so liberating. I found no message in his books but failure and despair (for me) men can be …. men should be… men rightly brought up will be… the world might be…,But what about is? The world was not what he hoped it might be, and neither is , nor could I believe that men would ever become the intelligent paragons of his imagination. “

The final paragraph brought tears to my eyes “It was a long time before I thought of writing about him. I will tell the world what a great father he was, I said to myself, how wise and witty and kind,how much fun we always had. They mustn’t think he was always a cold and rational philosopher. So I thought, and so I began to write, but it has not come out that way. The buts and complaints seized my pen and forced i to record them. “He loved truth, you know,” they urged. “You cannot honor him with a lying memoir. You must set down all that was wrong, all that was difficult and disappointing and then you can say: “He was the most fascinating man I have ever known, the only man I ever loved, the greatest man I shall ever meet, the wittiest, the gayest, the most charming. It was a privilege to know him, and I thank God he was my father .”

I do not think any other person would have been so true to herself except Russel’s daughter. You truly need to have a man like Russel in your life to be so truthful to oneself. This is one of the best biographies i have ever read.