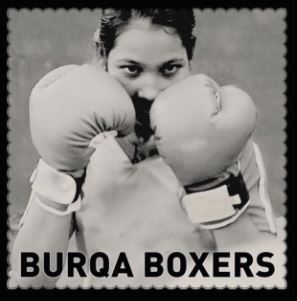 How far would you go for freedom? A choice between survival and social acceptance. For girls of Kiddirpur, a small muslim neighbourhood in West Bengal, the path they chose was something no one even dreamt of; a path less trodden. To be women boxers, carving out a space of their own in a male-dominated sport, that too in a patriarchal society. ‘Burqa Boxers’, an internationally acclaimed documentary portrays the incredible life story of these muslim women boxers, how they shatter the preconceived notions incredously, and stand up for their fight for survival.

Written and Directed by California based Indian American Alka Raghuram, the documentary is currently premiered on Cinemapreneur-an OTT platform for independent filmmakers, and has already received rave reviews from across the world. “When I heard about this unusual story of girls from a traditional community stepping out of their comfort zone to do something unique, it just inspired me right away. One of my photographer friends had shot these women in action and seeing those photographs gave me a massive adrenaline rush, and then and there, I decided that I want to tell this incredible story to the world,” said Alka Raghuram, who is also the producer of the film along with Deann Borshay Liem, 24 Images from France and Premlatha Durham.

With three women boxers belonging to different age groups as main protagonists, trained under Razia Shabnam, one of the first Indian women to become a boxing coach and an international referee, the documentary sheds light on their life trajectory amidst societal acceptance, financial conditions, aspirations and dreams. Smitten by poverty, for these girls, boxing is not just their passion, but a path to attain financial independence. Sportspeople in India have an option to get Government jobs in Railways or Police and girls opt for boxing eyeing the same. Being an earning member for the family empowers them to take their own decisions. The only way to break free, or else they are married off.

“Kolkata has a long history of  boxing with many public boxing rings around and these girls have seen their brother or father in the field and that gave them the exposure. Coming from underprivileged communities and boxing being a cheap sport compared to others, they saw this practical opportunity and grabbed it right away. Boxing gives them financial independence and also confidence to defend and stay strong when needed,” adds Alka, who spent nearly a year for research, building relations with the conservative community  and understanding the intricacies of complicated dynamics of the society.

The movie explores the emotions of not just the three boxers but people around who influence them and how boxing acts as a catalyst in life changing decisions. For Ajmira Khatoon, an aspiring boxer from the neighborhood, boxing is her future and leaves no stone unturned to attain the goal, even if it means regular beatings from father and family fights. To be financially independent is boxer Parveen Sajda’s dream, who is already a state champion but still struggles to get a job amidst societal marital pressure. And for Taslima Khatoon, who resides at a hostel for kids of impoverished communities like sex workers, run by New Light NGO, boxing has opened up new avenues to flourish.

Apart from these main protogonists, the documentary also brings into fore many alarming issues like the rise in number of rape cases in India, an upsurge in fear and how girls discover the need to rise, fight, and conquer their fears. Through the eyes of coach Razia Shabnam and her son, it also delves into prejudiced notions of society that perpetuates unknowingly and engulfs even the educated minds.

Funded by Independent Television Service (ITVS), Diversity Development Fund, Centre national du cinema et de l’image animee (CNC France) and Visions Sud Est, Burqa Boxers has already many accolades to its credit. Screened at the Locarno Film Festival co-production market, it received the top honor and the team also exhibited a compilation of  photo, video and art installation based on the project at the venue.  It was also invited to the National Film Development Corporation (NFDC) of India’s co-production market, FilmBazaar in Goa, 2011.

“Even though the setting of the movie is a poor neighborhood in West Bengal, people from across the world could resonate and relate to it during the screenings, which I consider as most rewarding. To be able to convey a story crossing all cultural boundaries was fulfilling as a visual storyteller. I would love to take Burqa Boxers further ahead to many more public platforms where it reaches a wider audience, especially educational screenings that initiate a conversation on women empowerment and need for change. We need more stories like these for people to step out of their comfort zone and discover their dreams,” states Alka, who is all set to embark on a new project – fiction feature film ‘Ayna’ starring acclaimed actress Mithila Palkar, a psychological thriller with cinematography by Gurgaon fame director Shanker Raman.

Alka also collaborates with other artists for different projects and is currently working on five short films based on choreography by Charlotte Moraga, artistic director at Chitresh Das Institute that encompasses the theme of five elements of life. She is also working on advocacy videos profiling mothers of kids with serious mental illness.

Dreaming high with her best laid projects ahead, Alka contemplates the proclaimed theme of ‘Burqa Boxers’, women need to step out of their comfort zone to discover their true self. Raised in a small town of Indore, Madhya Pradesh, filmmaking was never her childhood dream but it was her hidden passion that she unraveled while living in the US, returning to school after having kids. “We must always continue to explore ourselves. Nobody comes on the world stage with everything in hand. The only thing required is to be able to ask questions without any hesitation. You just have to ask, to learn, to empower, and to discover yourselves!” concludes Alka.