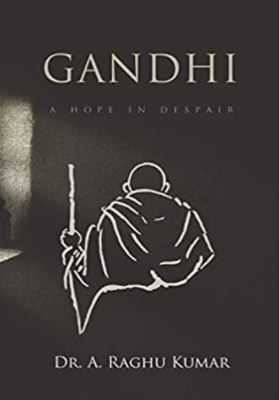 Gandhi – A hope in despair

GANDHI – A HOPE IN DESPAIR

“After a dedicated reading of Gandhi for over four years, I am no more in the binaries of “I” or “We” Vs “You” or “He” or “They” and now I find the need to respect the truth of the other. The condemning language in which I am trained so far has disappeared from my mind and the language of accommodation has overtaken me says Dr. A Raghu Kumar the author of the book GANDHI – A HOPE IN DESPAIR. A Lawyer by profession a strong Marxist for years, Raghu kumar is a voracious reader and was studying in depth the various schools of thought which have been influencing the social and economic structure of the world. His practical experiences as a trade union activist, his quest to find answers to the despairing scenario of human sect and his disappointments with the Indian Marxist ideology led him to Gandhi. After reading everything he could get on Gandhi and studying him he says “I found in Gandhi a rare and misunderstood intellect, in the midst of modernism, who could juxtapose religions, politics and morality, and threw a serious challenge to the idea of modernity as normally understood by many.

He quotes Felipe Fernandez-Armesto the British historian who said “No one should ever feel ashamed of turning back to tradition. Memory of what previous generations have learned is the foundation of all possible progress. When traditions conflict, they need more care, not less they should be keenly scrutinized, not casually discarded” For many Gandhi is part of our history and thus a tradition. The author therefore sees a need to study this tradition to understand our identity and he believes that studying Gandhi in the present context is the need for the present generation. When a continuous effort is being made by the modernists to eliminate Gandhi from the minds of the new generations, there arises the need to go back and study Gandhi which seems to be the only solution to the challenges, the country faces today.

Explaining Gandhi, the author writes “Socrates, Marx and Gandhi present huge paradoxes. They are contradictory because they embraced multitudes.” He reminds us that Gandhi was the only one who refused to celebrate the Independence day because he did not believe in the kind of Independence we have got. The author writes “There is a mass culture of denial and refusal  to take responsibility for one’s words. By this one standard alone, we have failed miserably, we have abandoned Gandhi. The true characteristic of faith is not to deny the hostility of the world, but to recognize it and to believe in spite of it. Faith is a battle. Many people believe that Gandhi strictly condemned violence even as a means of self defense. Romain Rolland in his work “Mahatma Gandhi” quotes Gandhi “where there is only a choice between cowardice and violence, I advise violence. I cultivate the quiet courage of dying without killing. But to him who has not this courage, I advise that of killing and of being killed, rather than that of shamefully fleeing from danger.” These words compel us to read Gandhi and his belief on Non-violence and what he meant by giving it the ultimate priority in the Indian freedom struggle movement.

Pannalal Dasgupta’s “Revolutionary Gandhi” ends with a warning of Mahatma “Note down these words of an old man past the age of three score and ten; in the times to come people will not judge us by any creed we profess or the label we wear or the slogan that we shout but our work, industry, sacrifice, honesty and purity of character. They will want to know what we have actually done for them. But if you don’t listen, if taking advantage of the prevailing misery and discontent of the people, you set about to accentuate and exploit it for party ends, it will recoil upon your head and even God will not forgive you for your betrayal of the people”. Coming to the so much criticized Non cooperation movement Pannalal contends that Non-cooperation is not a passive state but it is an intensely active state – more active than physical resistance. Passive resistance is a misnomer. Raghukumar in detail gives the essence of Pannalal’s study of Gandhi along with a few others.

Here from the Marxist point of view Gandhi is analyzed and the author quotes Pannalal ‘s book and gives us these lines “It is not an unchangeable belief of Marxism-Leninism that class struggle will finally take place only by recourse to arms in all countries and at all times. The recourse to arms would depend on the actual conditions and Lenin mentioned this too. It has been accepted at the 20th Congress of the Russian communist Party also that it is possible to usher in socialism in many countries even without the use of arms and without a civil war and that all efforts should be aimed in that direction” This statement brings out the Gandhi an philosophy to be reread and interpreted without any bias and understand him through the experiments he was involved with and the truth he believed in.  Nirmal Bose’s words are quoted by the author thus.. “It is just here that the method of Satyagraha steps in as a possible and effective substitute for war. It does not propose to do away with conflicts but it raises the quality of those very conflicts by bringing into operation a spirit of love and a sense of human brotherhood. “Satyagraha is not a substitute of war, it is war itself” justifies everything.

Gandhi believed that “The brain must be educated through the hand”. Explaining Marx and Gandhi together the author writes “Both Marx and Gandhi consider human beings as basically social beings. Gandhi considered the western civilization, more specifically the Industrial civilization and onwards, the modes of production and development, distribution and organizing the society as degrading and inhuman. The alienation is both from the nature and the nature of man for Gandhi. Both Marx and Gandhi laid their hopes on the goodness of the human beings, but while Marx considers the man in class or classes, Gandhi resorts to man in as the primary unit. Marx’s ideas led him to the inevitability of class war, and Gandhi’s led him to trusteeship.

Gandhi’s thoughts on women in those days were revolutionary. He says “Many of our movements stop halfway because of the conditions of our women. He believed that men and women played complementary roles not absolute independent identities.  Gandhi was in fact a mother figure to many. His grand-niece chose for her short memoir on Gandhi, the title, “Bapu – My Mother. It was during his leadership, whether in South Africa or back in India. Women participated in all forms of the activities – political, economic and social, more vigorously than during any other times. This reality holds good even when we take into consideration all the revolutionary movements worldwide into consideration.

Erickson’s letter to Gandhi goes thus…  “In studying your method of Satyagraha, I have become increasingly convinced that psychoanalysis, not if judged by its physical terminology and theory but if understood as it is practiced and lived according to the rules and the intentions of its originator amounts to a truth method, with all the implications which the word truth has in Satyagraha “  Satyagraha was translated as Militant nonviolence by Martin Luther King who believed in the Gandhian experiments.  The author gives the contents of Gandhi’s letter address to the British government before his step to Salt Satyagraha where is writes “British rule has reduced us politically to serfdom. It has sapped the foundations of our culture. And by the policy of cruel disarmament, it has degraded us spiritually. Nothing but organized non-violence can check the organized violence of the British government.”

A time when Ambedkarites, Brahma Samajis, Muslims and many more got into the web woven by the British raj, Gandhi alone stood as a lone fighter, misunderstood, misjudged and misinterpreted.  His thoughts like “There is a need to place spiritual and material aspirations in their respective spaces in the social dialogue” were never understood in the right spirit.

The author describes Gandhi’s views on religion, truth and ahimsa and tries to clear the misinterpretations about the experiments made by Gandhi. Gandhi’s Swaraj meant living without fear of an authority and employing self-determination of choices in life.  His idea that Politics devoid of religion are a death trap because they kill the soul was not taken in the right spirit but today observing the chaos around the world on the name of religion lot of his statements make sense. That’s why Romain Rolland considered Gandhi as one who has introduced into human politics the strongest religious impetus of the last two thousand years. Gandhi believed “Politics devoid of religion are a death-trap because they kill the soul” He says “To me political power is not an end but one of the means of enabling people to better their condition in every department of life. Political power means the capacity to regulate national life through national representatives”    B.R. Nanda writes “Gandhi instigated, three major revolutions of our time the revolutions against racialism, the revolutions against colonialism and the revolution against violence. He lived long enough to see the success of his efforts in the first two revolutions.

The author agrees that there were mishaps and failures Gandhi himself experienced and acknowledged in his experiments. But as Durant says “Perhaps Gandhi will fail, as saints are likely to fail in this very Darwinian world. But how could we accept life if it did not, now and then fling into the fact of our successes some failure like this? Dr. A. Raghukumar’s book Gandhi – A Hope in despair talks rationally and logically about the need to understand Gandhi as a thinker and not a Mahatma. Here the author quotes Prof. Douglas Allen, the author of “Gandhi After 9/11” in an interview to Adrija Bose of News 18.com saying “Calling Gandhi ‘Mahatma” is not useful, its anti Gandhian.

The author rightfully believes that “there arises the necessity to re-examine Marxism, Leninism, Mao’s thoughts and Gandhism, for the virtually blocked path of revolution has to be reopened for its onward march and a way have to be found to inspire faith once again in the hearts of men.””If Marxism has made a great contribution towards laying the foundation of the socialist culture from the point of view of economics and state craft, Gandhi’s contribution in the domains of morality and public life will make their foundation considerable more  natural and elegant.

GANDHI A HOPE IN DESPAIR is a book which talks about Gandhi as a thinker, philosopher and a man who was continuously experimenting in his life and moving towards truth. He was a believer but his god was much different from the religious sects, he believed in self respect and introspection. He did not confine himself to any particular ideology and never believed in Gandhism. He said that there is nothing like Gandhism or followers of Gandhi, all he wanted was human life moving towards spiritual, political and social progress making love and truth as their main weapons. He encouraged mankind to work for permanent solutions which build the essence of a humanistic society. He failed sometimes and he succeeded in a few endeavors but all that matters is his search for dharma and his emphasis on truth.

2 thoughts on “Gandhi – A hope in despair”