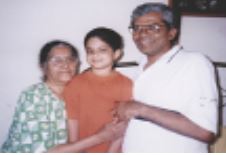 We came back to Rohit at the end of May 1996. He recognized us and was very happy to see us. He was two years old by then,a happy, healthy child. Both of us were very happy to take charge of the baby and Naveena felt more comfortable at work as she had nothing to worry about her baby boy left behind at home.

I used to go along with Rohit to his doctor, Geetha Shah when his parents took him for regular checkup or shots. I used to follow doctor’s instructions at home in taking care of Rohit. It was easy to look after him- a happily growing child. Innaiah and myself took him for walks in his stroller. We used to take him to a nearby pond where geese, cranes gathered.

We used to carry some bread with us to feed them. Rohit enjoyed doing it. As he began talking he used to say that- when the birds made ‘quack’ sound once,- they were  thanking him for feeding them. If they did- Quack, Quack, Quack- three, four times- they were asking for more bread. Who knows, perhaps he followed the bird’s language. Once we carried ‘raisin’ bread- the birds didn’t show much interest in eating it, so  he made us to go to a nearby Shoppers shop and buy regular bread for them.

As a baby, Rohit took interest in reading. I used to read stories for him and he heard me carefully. When I used to read articles from  ‘The Wall Street Journal” lying beside him, he used to look at the paper as though he himself was reading it along with me.

Eventually he was sent to a nearby baby care centre. He always felt very happy to come back home to us.

Naveena used to buy a lot of toys for him though he wasn’t much into playing with them. She got him  the alphabet all 26 big and shiny letters. I used to show him A to Z pronouncing them and he  learnt to say A to Z very soon. Slowly he started making simple words with them, first Dog, then ‘God’ and so on. I taught him numbers one to 20 at the beginning. I used to count grapes while trying to feed them to him. It was not always easy to make him eat his food. He didn’t like anything  cold, such  as  ‘yogurt’.  Even now, he does n’t  eat yogurt and rice like most south Indians do and prefers fruit yogurt.

Slowly he  learnt the numbers one to 100 and  I taught him to use chalk to write them down. He used to write them on the drive way to show his mother his work, when she returned from work. He used to recognize her car  from a distance.

Innaiah learned driving for Rohit’s sake. He used   to take him to his Montessori school and bring him back. We used to go with him to the children’s section of the library. He used to play there and pick many story books. For kids they have small seats to stand on and reach the top shelves of the book racks. Rohit selected some books on his own. After coming back home he used to make us read all the books one after the other. The surprising thing was that- he used to repeat each story to us as though he was reading from the book itself.

Innaiah used to tell him some simple science theories- I still remember how he was taught Archimedes theory while Rohit was taking bath in the bath tub. Hence Rohit’s attention was directed to science when  he was still a small boy, and he knew about planets and the solar system. Once I was reading to him the story about Noah’s Ark and he asked me how tigers, lions and goats and sheep could sail together in one  boat as wild animals devoured goats and sheep. I didn’t know how to give him a convincing answer. I escaped saying that it is a story. During summer we used to take him to story reading sessions for kids at the library.

In America, libraries are very good source of knowledge. Both of us took library cards showing them our pass-ports and proof of our staying. We could borrow many books. Even latest books we could borrow though we must return them in a week’s time. Other books we could keep for 20 days. If we asked for a book that is not  in that library, they used to get it for us from other libraries all over America and inform us to collect it. Such good facilities are available here in American libraries. We really made use of them.

I always used to keep Rohit clean, changing his diapers frequently. Naveena used to buy many new outfits for him and I used to dress him up and click a photo of him in each new outfit. 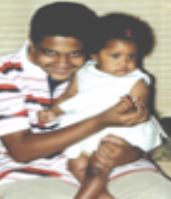 Naveena had finished her M.D. and was busy working even some nights. She used to miss all the fun playing with the little one. She used to call home in between work to enquire how we are and what Rohit was doing. When we used to recount all that we enjoyed being with Rohit- She used to say: “you are enjoying with the baby, which I am mostly missing.

Rohit used to like Chuckee  Cheese, the  children’s play place. Very often he used to ask us to take him there-it was a phase when he was very fond of that place.

Raju and Kim visited us occasionally and Rohit was happy to be with them. He was well liked by both of them. Kim used to carry him- sing and dance. He was thrilled to be a part of all that.

Kamala visited us when she came to see her son Rajsekhar in San Francisco. She was suffering from severe acidity problem then. Naveena gave her some soothing medicines. Naveena drove us,  Kamala, Tulasamma and Raghava Rao (they were visiting their son Jitendra here) Innaiah, Rohit and me to Niagara Falls. It was a very long drive. We enjoyed the trip staying there in a hotel. She took Rohit to Toronto to visit her childhood friend Farrukh. We were invited for a dinner by doctor Rama (Narla’s youngest daughter) and her husband Dr. Vijayakumar in Buffalo. We enjoyed meeting them and having dinner with them. Dr. Vijay Kumar even gave some medicines to Raghava Rao for his diabetes and Kamala for her acidity. That was Labour Day week end. We found many Indian tourists at Niagara – parents like us visiting their children. None of us could drive so Naveena had done all that tiring driving.

We had been to Disney World in Florida with Raju, Kim, Hemanth, Naveena, Rohit, and John. They drove us all the way in two cars, we stayed there for a week in the rented accommodation. Along with Rohit we enjoyed all the shows and activities. Rohit used to hold my hand and show me if he found anything interesting.

Some of Rohit’s Montessori School American friends are still his friends even now. They come home for his New Year party and birthday  party  or  just to swim in the pool at home.

We took him to karate classes and Kumon classes. He did learn karate but always hated punching other boys or attacking them as part of his training.

Rohit hated loud noise or sounds – whether it is music, people talking loudly, or noicy high machine. As a baby he hated the pressure cooker’s whistle. He used to look at me with a question mark on his face”  ‘Can you stop it.?’’ I  used to spare him from the mixer, food processor  sound too. He never liked to be left alone as a baby – even for a few minutes. I used to go on talking to him some sense or non-sense. May be that helped him to talk very early. While, repeating a, b, c, d, he had difficulty with ‘W’. He used to say ‘Tapi-Tapi’ for ‘W’ for a few months.

Naveena used to buy some Indian sweets for us – one such sweet is ‘Jilebi’. Rohit used to call it ‘Jilibilee’. That sounded very good to me. So I even now call it Jilibilee though he calls it ‘Jilebi’.

Once Rohit came up with a question to me all of a sudden – He asked whether I was present in the hospital when he was born. I said ‘Sure, I was’. Then he asked how his mother and me allowed him to scratch his nose in the hospital. On the fourth day we brought him home. A photo was clicked and Naveena got it enlarged and it is still there on the wall. I even took a copy of it to our home in India. A nail scratch mark is quite clearly seen on his nose in the picture. In the hospital a nurse gave me a small nail clipper and asked me to clip his nails. I was afraid of hurting  him  in the clipping process. So I didn’t do it. Hence the scratch mark on his nose. He was absolutely right in pointing our negligence. He had learnt to question instead of implicitly believing in what others say. It is a good habit in a child.

It was the first visit of both Kim and Rohit to Hyderabad and Naveena and Hemanth threw a lavish party in Hotel Viceroy in honor of their  visit. Many relatives and friends attended the party. Hemanth arranged for music. Thus Kim and Rohit were introduced to our near and dear ones with pomp.

On Rohit’s first trip to Hyderabad, our friend Veeramachineni Sarojini sang a beautiful Telugu song to entertain him. He was eighteen months old then. Rohit liked the tune of the song and singer’s musical voice. He showed his appreciation by dancing and clapping for her. He did not understand the language but he has a musical ear and could appreciate Sarojini’s singing. She was totally surprised how a little boy could so express his pleasure and happiness. Later Sarojini wrote and recorded a song for Rohit’s birthday and sent it in an audio cassette.

Once a friend of ours from London was visiting us. He asked little Rohit  whether he eats his soup or drinks it. Rohit thought for a while and said he eats his soup and asked the guest whether he drinks soup. Rohit is very sensitive and thinks before saying anything.

I can recollect many beautiful memories from our wonderful stay with Rohit. Thanks to Hemanth and Naveena for giving us that opportunity.

Rohit used to arrange all the states (wooden blocks) on its stand very fast and he new the  names of  all the states of  America. Raju used to set Rubic cube in less than a minute. However much I tried I could never do it till now.