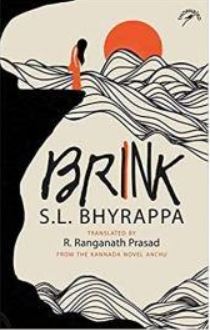 A Psychological study of a depressed mind – BRINK

BRINK is the English translation of ANCHU a Kannada novel written by S.L.Bhyrappa. R. Ranganath Prasad translates this novel from kannada.  Brink was published in 2020 while the original novel “Anchu” was written in the year 1990. This is the story of two people Amrita and Somasekhar and their turmoil faced due to their passionate love. More than a love story this novel should be read as an in depth study of two minds and their struggle to make the best out their relationship.

Amrita is a married woman with two kids and Somasekhar is a widower. Amrita moves to Mysore to pursue a teaching job along her young children. Here while getting her old house repaired she meets an architect called Somasekhar and they fall in love. Somasekhar is a lonely widower and seeks Amrita’s company with relish. Amrita is an intelligent woman and has a sad past. She lost her mother at a very tender age. Her Aunt took up her responsibility and becomes her guardian. She was always interested in academics but at an young age,  she was married off to her Aunt’s brother. She agrees to all her Aunts decisions not knowing the reason behind them.  Only after the birth of her children Amrita realizes that she has been cheated by her Aunt. Her Aunt has been manipulating her and everyone around since long and she has robbed a lot of earnings from Amritas’ estate. She  secretly bought two more estates on her name and all the while was stashing a lot of cash and gold into her personal account.

Amrita was cleverly married off to an un deserving man so that her property remains in the family. This revelation creates a lot of anger in Amrita. She questions her Aunt about the truth. Her Aunt pretends shock and hurt and leaves Amrita’s estate to her custody and moves away to her estates.  Amrita finds out that a lot of loan was taken on her estate by her Aunt.  She finds out how she was cheated on the name of love. What troubles her more  is that, she is not in a position to take revenge on her aunt, neither is she able to manage her estate which is heavily in debt. She separates from her husband physically and with two children struggles for her identity and self respect. It is during this period she meets Somasekhar.

The anger she feels for all that which happened to her, and for the situation she is into, makes her suicidal. Many times she gets the urge to end it all and moves out of the house with a revolver in hand. The constant thinking and questioning in her mind results in a lot of mood swings. She experiences happiness and grief at the same time. Byrappa elaborately discusses the mind of a depressed woman and her mood swings along with her panic and anxiety attacks. Tragically the anger Amrita experiences about her past and her helplessness gets targeted towards her lover Somasekhar. Amrita knows that Somasekhar is her only friend and confidant in the given circumstances but whenever she finds him showering love and care on her, she gets into her angry moods and punishes him emotionally with her bouts of anger.  She gets into a lengthy dialogue with him, and the ever patient Somasekhar tries to understand her and help her. His patience increases Amrita’s anger. The reader finds oneself sympathizing with Somasekhar and wishing him to move away from this woman who becomes difficult to deal with, as their relationship grows.

Somasekhar had a small affair with a colleague while his wife was alive. It was a casual affair and he confesses about this affair to Amrita. Amrita takes this as a point to pass painful statements whenever she becomes uncontrollable. She also becomes violent and abusive at times. Somasekhar tries to endure this and silently suffers. His work gets affected. He loses important clients because of his priorities shifted, and he finally comes to a state where he loses all his interest in work and personal growth. Among all these incidents, his love towards Amrita remains the same. Many times the couple fights and then they try to move away from each other. But their mutual affection brings them back together. They passionately unite only to fight again, where Somasekhar is faced with another bout of anger and abuse.

Somasekar understands the reason behind Amrita’s anger and he asks her to face the situation reasonably. He encourages her to have a legal battle with the Aunt and fight for her rights. Only when Amrita takes up the legal battle and gets positive results she finds her emotions calming down and her mind finds peace. She also decides to legally separate from her husband whom she kept at a distance for seven long years. But when she is told that one of her Aunt’s son was born due to the relationship between her father and the aunt, she decides to leave a part of the share to both her Aunt’s sons, but only after winning the legal battle. She decides to take up an interior designing course and earn her own livelihood and maintain the property for her children’s sake. From the nagging depressive angry woman she matures into a logical woman and comes out of her depression with the support of Somasekhar and his enduring love.

The novel elaborately describes the mood swings of the depressed and the Brink they reach where they stand brooding to chose between life and death. Amrita refuses to visit a psychiatrist and spends her days on the brink. Somasekhar endures the mental and physical abuse with a lot of understanding and love. He befriends Amrita and gives her unconditional support. Sometimes the writer is very elaborate with the conversations and the bitter words  spoken between the couple where the reader is left thinking about the difficulties people face in romantic love.

Amrita is a woman with strict code of conduct and moral views. It angers her to think that her life brought her to a situation where she had to find love outside marriage. She hates the situation where adultery becomes her only solace in life. She loves Somasekhar but also hates the situation which made her a fallen woman. This anger, she diverts on Somasekhar, She insults him abuses him, emotionally shatters him and Somasekhar is suffcoted by these extremes. One side he experiences immense love and care while on the other hand he becomes an easy target on whom Amrita vents up her anger and frustration. With all the pain he is still unable to move away from her. He becomes tired and lonely and loses interest in all worldly matters.  Finally he sells everything and starts living in a small rented place with his meager savings. His poverty and fall in social status, calms Amrita and she thinks about ways and means to mend things. Only then she accepts that her inbuilt anger is the cause of this strain and she works to get rid of this mental agony.

In most of the extra marital relationships we observe a lot of conflict going between the couple. They experience great insecurity which comes with their social positions and living conditions. This insecurity mostly is faced by women who are afraid of the consequences of this relationship as they feel more socially obligated. They develop anger and hatred about the situations they have fallen into, and many times they become violent and scheming. Love needs moral approval to actually give happiness to the couple. On the contrary it becomes more painful if insecurity and fear dominate their relationship. It is in such circumstances one of the partners become abusive and manipulative.  Amrita goes through this moral insecurity while in relationship with Somasekhar and this leads to suffering by both of them. At one stage the physical intimacy they share also puts a lot of doubts into Amrita’s mind. She suspects Somasekhar’s intentions and regards him as a manipulative man who took advantage over her situation. She blames him for seducing her and putting her into this amoral state. She feels cheated and dejected. Finally when she sees him left alone without a job and a career and finds him living a low life she understands how much pain she had been giving him and then decides to fight  the causes.

Love is not always a beautiful thing. It comes with a lot of pain and only when this is endured can the couple move on to the path of maturity. The partners necessarily need to work on their relationship and have to be committed and loyal to each other to actually get to the matured phase of life.  Both partners need to work this together, to achieve a peaceful phase in life. If by any chance one of them fails to raise up to the situation then love becomes an ever ending pain to the other.  This risk always remains and that is why mutual understanding becomes a necessity in any relationship.

The writer gives elaborate description of a depressed mind and that makes this book interesting. How personal and emotional failures in life effect the morale and the mental health of an individual, is a valid point which most of the people concerned with mental health ignore. Byrappa makes this as the main theme of this novel. It is not an easy read and sometimes tests our patience too. But the writer succeeds in giving the reader an experience of being at Brink while fighting to chose between death and life. With so much of anger and hatred Amrita showers on Somasekhar, this feeling helps the reader to sympathize with Amrita and also understand Somasekhar as a man trying to help his beloved.