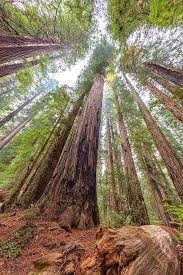 America Through My Eyes- California – North-4

Though It was very late at night, I woke up pleasantly that morning.  The reason for that was on our journey that day we would cross California to another state in the north. The reason for my pleasure behind it was, we were going to see how other states in America are.

Travel: Today we continued our journey by visiting the world-famous Redwood forest area and reached by an evening at Klamath Falls in the neighboring state and stayed there. No particular advanced planning except to stop at certain sightseeing places along with our travel. As we changed our minds about going back to Eureka, we continued our journey for another couple of days!

Redwood Forest: A few hundred miles of area, after traveling 20 miles away from Arcata, is known as the “Redwood Forest”.  At first, we did not understand where to go and what to do during our visiting time in that forested area that stretched on all sides. So we headed to the  “Information Center” nearby.

The heat wasn’t great even on good summer days and it’s also a densely forested area where we felt cold. The place was away from the original road leading into another small path. There’s already a long queue outside waiting for the details before the center. It takes at least one hour to get out of the line if we follow, So I thought a little faster and greeted the first people coming out of the line, and marked the details of the places we wanted to see, asking them. In addition to the places only it could be possible to ride in cars around there, there were also trekking trails on bicycles and foot. Many other things spread out on all sides for car travelers. But since we had to go north, we decided to go ahead on the northern side and watch the sightseeing places.

After ten miles the road had split inwards again. We headed on the side road because there were some important things to see. Another information center appeared there. It’s less crowded, and we’re divided into groups and explained in detail. Within ten miles from there, there were trees again. We took the map and reached the first tree.

Nothing was visible outside of the car parking lot. We saw the gigantic tree ten steps ahead. It is the tallest tree in the world.

Its height is 370 feet. 1500 years old. In front of it was a table-like pavement. You can stand there and take photos. It’s taller than the five stories building and the Statue of Liberty. As there were so many tall trees all around, the small trees with ordinary twigs are full of moss and look like ghost trees. The sunlight seemed to never fall upon them throughout the year.

From there, another couple of trees, another tree, another tree, no matter how many you see on the way, you will never be satiated. We proceeded forward looking at Redwood trees. Every tree seemed to tell a silent story in my ear. I went on touching every trunk saying goodbye to the leaves that had grown into the sky and I felt as if I was shaking hands with my forbidden friends who were unknown to me till now. We reached a place called Klamath. At the lower land, there’s the Klamath River. That’s not a large river. Only large canals are said to be rivers here. These are very small compared to our rivers.

Half an hour later the traffic was jammed by some road work when the car was going across the bridge over the river. On either side of the bridge, large brass bear dolls attracted children. Ten or twelve miles later a place called “Trees of Mystery” appeared. At the entrance, there’s a large buffalo replica and a 30-foot tall toy called “Paul” standing next to it. Cars were packed with nowhere to go. The toy shakes its head and answers the questions asked by anyone. That’s a big attraction for children. There’s a “ropeway” to watch the redwood trees through it. We stood for an hour in the long line there in that cold. But it takes another two hours to pick up the ticket.  It was already lunchtime. So we gave up on that attempt. This means that it is useless to wait in a crowd without prior reservations.

Crescent City: We reached Crescent City by 1.00 ‘0’ clock. It’s a  California state’s border town. From there we have to go through a complete forest path. The city is on the shores of the sea, it was already cloudy, and the snowfall added some more flavor to the dark. We ate pizza and quickly finished lunch. Then we went to the Information Center and caught the right road. We decided to go to the neighboring state enjoying the forest on the way.

They gave us a map and directed us to look fifty to sixty miles radius around the town. We had to go back some distance and were redirected to the way we came again. However, during our stay, we went ahead looking for a nice place for the kids to play. At around two o’clock in the afternoon, luckily, the sun started gleaming warmly. In the distance, I saw a  rivulet and a few people.

Jeddah Smith Redwood Park: We took the first turn from there and went inside. However, it is adjacent to the campground and requires a one-day 15 dollars ticket to halt even an hour. The name of the place is “Jeddah Smith Redwood Park” and the name of the river is Smith River.  The good camping ground was there inside, some distance down the river bank. About a hundred people were camping on the banks of the river under the sun umbrellas, relishing their lunch boxes and carrying iceboxes. Some kids were swimming. There didn’t seem to be much depth. The stones were visible from the water and looked beautiful. The water was cold as usual when we touched our feet.

The children jumped into the water and started playing as if nothing was there to be scared off. A green rainbow spread out the shore as the tall trees met the earth and the sky. A rivulet was rushing in search of a way out from there. We snuggled up in the sun on the beach on that nice warm day. The hours passed but we didn’t want to move from there. If the water was a little warmer as if at our place, we would feel Heavenly there! We moved forward and hit around the campground, standing open from the top of the car, and hilariously enjoyed it with the kids. It’s a great feeling to see the trees twisting back the nape of our necks.

Once we got on the road we started the journey by looking very carefully for the signal board that would direct us to cross California.  As it was a Ghat road, if we go too fast, we might be or might not be able to turn the car back and take a turn. Of course, I saw on the map that a tunnel would come before the border. Whenever we crossed the Crescent City there were no more cell phone signals. We just have to be more cautious with the help of a route map. In another hour we hit the “Collier Tunnel”. There’s also a neat rest area just before that tunnel.

Oregon: We stopped and walked through the tunnel for a few minutes and began our journey. Within 5 miles we hit a sign saying “Welcome to Oregon”. Another quarter of a mile in the opposite direction was the sign “Welcome to California.” I asked Satya, “To who does this quarter of a mile between these two states belong?” Satya satirically said,  “It’s not ours”. They put up a fence at a distance so that it could be seen by oncoming vehicles from both sides for check-ups. The state seemed as different as I thought! The petrol pump was seen first. The first time I saw humans working at petrol stations like in India.

It’s not like California, with its shop names, houses, and roads. We felt that we had come from the city to a pure village. Apart from that, We observed there were small farms and small plots.  Wherever you go all over California there seems to be nothing in the hands of small farmers except in the hands of multinational companies. We witnessed a kind of drip irrigation by human operation with round iron rings. We thought that at least the people there were still valuing human labor.

A sign reading “Oregon Caves’ appeared on the side of the road.  When I looked at Satya, he had already turned the car, even though it was five. The board showed that the information center would open only until four. We must drive 20 miles inside, to know the details. Yet, we proceeded forward. Being a narrow road it took almost forty-five minutes to get there. We had to travel across a completely small hill.  The children were very tired. However, we walked a little further inland from the car park. But by the time we left we had run out of tickets for the last trip of the day as ill-luck haunted us everywhere that day.  Besides that, the stairs in the caves were very high so children less than 5 years old are prohibited.

So we couldn’t go anywhere at that location. At the turn of the road 20 miles away, if the office would have been open for at least 5 ‘0’ clock, we would not have been troubled in this way! and we cursed our bad luck! Though we could not go inside the caves, we roamed around the Gift Center there. We bought some gifts and enjoyed the cool surroundings.

We halted at Medford for dinner. We went to an Indian restaurant there and relished on foods of medium-tasting ingredients. Our stay was another two hours drive from there. It was still bright even at 8.30 because of Summer. We didn’t know the distance until we traveled to our destiny. Hotel rooms must have been booked in Medford.  But the route is not properly understood and so we booked elsewhere. We arrived at our hotel in Klamath Falls at 10.30 pm. Children were exhausted and asleep. Though it’s a good, expensive hotel, the room looked like a typical plain hotel in California. We felt after our trip that day it seemed that California was a very rich state anyway.

The next day, we wanted to see Crater Lake actually and decided to go back the same day. Everyone wanted to get back home. As we had been wandering desperately for 4 days and once we fell asleep we didn’t know where we were. In our dreams, we saw the cloudy hills, the streams of cold water, and the towering skyscrapers, then we stepped into the next day.