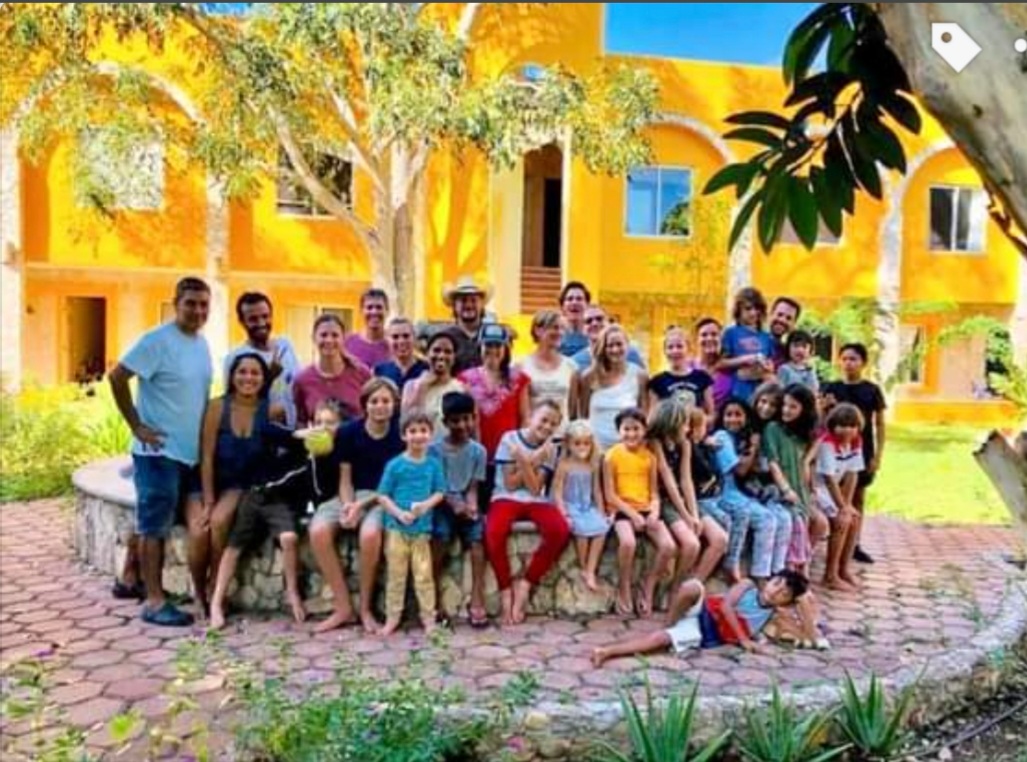 “I think you three should escape this winter to a warmer place. You have just been back from India a few months ago, so it should be somewhere else” said the husband while looking into his laptop.

I don’t really mind going back to India though, I said to myself.

“By the way, I came across this community a while ago. It’s called “Anahata Worldschooling Community”; people who travel around the world with their children can visit them and stay with them for a while. They are offering so many activities and guess where it is?” I showed him a website on my phone and looked into his eyes waiting to hear what he would say.

“Somewhere in Europe?” He looked hopeful.

After a minute of careful long thought “Why not? Staying with a community for sometime is a great opportunity for our kids, especially when they are home educated. We don’t have to stick to the school routine and plan trips only during their term holidays.  Just go ahead and learn some new skills. Moreover we hardly find such communities in Europe anyway.” The husband approved the idea instantly.

I jumped up and down in my mind with ecstasy. I love exploring new places and learning about the local culture. My 2 boys then aged 6 and 8 and myself packed our bags – just hand luggage with 8 pairs of clothes each and 3 kindles. We left for Mexico from London Heathrow Airport in November 2019. Our planned return journey was after 3 months.  Husband promised that he will join us later during Christmas.

We landed in Cancun airport quite late at night. Christian (the owner of Anahata and originally a Bolivian but grew up in the US )and his lovely 9 year old daughter Valentina came to receive us at the airport and started driving us to “Ek Balam” which is a tiny village in Yucatan Peninsula. We were utterly exhausted and the boys fell asleep instantly in the car.

I asked Valentina why she had to accompany her dad late in the night instead of going to bed. She said, “I like travelling and going out”

I felt it would look rude to fall asleep while Christian was driving. To keep myself and Christian awake; like a curious little child, I started bombarding him with so many questions about Mexico. They ranged from what they eat, how they live, to how long will it take to learn Spanish?.  Christian answered all of them patiently while these kids were in deep sleep in the back seat.

I could already feel the energy of Mexico and seeing those tiny villages in Yucatan, felt so much like India. Forgive me if I connect everything with my beloved country India. It’s hard to resist. Moreover, Yucatan has a tropical climate exactly like Southern India.

After three hours of driving through totally empty roads and hardly any other cars we had reached Ek Balam past midnight.

Anahata had a huge courtyard in the front with several trees. There were three different buildings.  I couldn’t notice much of the surroundings as it was quite dark.  Christian showed us our room and waved good night as he seemed quite tired as well.  Our room looked a bit rustic but huge with an attached bathroom. We rested well in our cozy beds that night.

The ring of the bell woke me up. I got out of my bed and pulled the window curtains to see what’s happening outside. The Sun was entering the room already. I thought “what a delight being here?”. I was so sure that I won’t miss England for the next three months.  I saw several kids running towards a huge hall with glass doors that’s right in front of our room. I thought it must be the bell to gather for breakfast. I woke the boys up, we three got ready and entered into the dining hall.

Some children sat around a big table waiting for their plate in front of them while a 5 year old boy was playing with a dog nicely on the floor without bothering about the surroundings. I sat the boys at the table and stood back watching the children. They quickly made themselves comfortable and started answering the questions from other children. I started feeling a bit relaxed. I had left them there and walked out of the hall and looked around.

All the buildings were painted in yellow, the colour of heart chakra, Anahata. There was a huge fountain in the middle. Some children who were not so keen on food were still running around and some jumping on the trampoline in a corner. A boy was relaxing in a hammock tied to a Jackfruit tree with a book in his hand. I sat on the edge of the fountain and started enjoying the Sun.

“Where must all the adults be gone?” I wondered.

Patty, the wife of Christian(Mexican but grew up in the US) came running to me full of excitement and gave me a tight hug. We had communicated with each other via emails before, so I knew her a bit.  I thought, “Oh! so much positive energy around her, hence she is able to make a community life work here!”.

She asked me if I would like to join Kundalini Yoga upstairs in the Yoga Hall. I thought “I don’t need to worry about the boys as they are in a safe place, I don’t even need to cook food, wash the vessels or wash clothes for a month. Just chill and practice Yoga everyday. What else could I ask for?”

We walked into the Yoga hall and she introduced me  to the people that were waiting there.

There were about 5 other families staying there at that time. I was told that there were more arriving in the next few days as it was a high season. Every family had a story to tell about why they were travelling and how they ended up at Anahata. I just couldn’t wait to hear their stories.

After yoga and breakfast, Christian announced how the day was going to be. The usual activities included, Spanish lessons for both adults and kids; tortillas(pronounced as thothiyyaas) making, chocolate drink from cocoa beans, hammock weaving, embroidery, farm tour, traditional Mayan folk dance, visiting cenotes, beaches and Mayan ruins. Not only that, there were so many unplanned activities that would just happen in a day’s notice.

For example a guy that was travelling from the bottom tip of South America all the way up to Mexico by his bicycle, came one day and offered some circus feats to entertain us.  He even taught us a few tricks.  Christian offered him free food and bed and we all contributed some money for his onward journey. When he runs out of money, he works in a bar or a restaurant until he saves enough and travels again. I was awestruck!

Most of the sessions for kids were offered by the local villagers.That way the villagers would earn some income. Some of the village girls work at Anahata.

First Spanish words we three learnt were Gracias, No Gracias, Easy! Boys would say No Gracias! whenever they don’t like something that the girls in the dining hall offer them. I am sure they started feeling like locals already. I was!