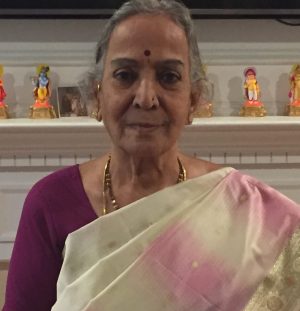 Monday morning. Ten thirty AM. It was sunny and hot. Ravindra and Padma who had travelled in an auto riksha that was already full of passengers squeezing themselves in, got down at B-camp, in front of Andhra Bank, situated by the side of Vijnanamandir school and Parthasaarathi temple.

Ravindra paid the fare to the auto riksha man and walked forward checking the papers he was carrying with him. Padma followed him.

The bank was full of people. The previous day being Sunday people throng the place with pending demands making it impossible for the bank staff to cope with the rush.

Ravindra somehow succeeded in making his way to the counter . He came there neither to deposit money nor withdraw his money. Not for any transaction for that mater he came there for a personal loan. Unless he secured the money in a day or two, his son’ s future would be at stake.

He was a government employee getting an average pay. There was a gaping gap between his earning and expenses. To maintain his small family consisting of his wife and two children, every month he had to borrow some money to make both the ends meet.

Now that his son was to be admitted in the engeenering college, he had to take a huge amount as loan. As a last resort he was ready to pawn his wife’s wedding gold chain and came prepared for the worst . Padma removed the wedding symbols from the gold chain and tied them to an yellow thread and wore it so as to facilitate pawning the gold chain if necessary.

The curly haired lady sitting at the counter who was wearing reading glasses was busy entering the details of the countless passbooks thrust at her into the computer.

After ten minutes Ravindra could get her attention and handed over the application to her. She looked at the paper and waved her hand towards the manager’s room.

Ravindra made his wife sit there before proceeding to the manager’s room.

Already there were four people sitting in front of the manager waiting for their turn. The manager was trying to answer all of them – a rich looking couple and two businessmen- at a timetime like Arjuna who could aim arrows with both his hands at the same time and hence earned the title Savya Saanchi.

He attended to the work of the business men who came to deposit huge amount first and then turned to the rich looking couple.

Before Ravindra could sit in the chair emptied by the two gentlemen , two more rushed in and occupied the seats making it inevitable for Ravindra to stand and wait.

The lady in the pair wore an expensive saree and gold ornaments .Though she was decked like LAKSHMI- the goddess of riches, her face lacked the glow that comes with happiness.

The manager was explaining to them the maximum amount they could get on their term deposits.

Ravindra looked at the papers in his hands. Then he looked at Padma sitting on the other side of the glass partition looking at him worriedly. He turned his face.

The manager finally informed the couple that they could take forty lakh rupees loan on their term deposits. The husband explained it to his wife. She just nodded in agreement. Se tried to say something but stopped.

Ravindra could hear her voice break.

He was tired of waiting for them to finish their business so that he could talk to the manager.

“ Why should these moneyed people opt for loans on term deposits? Probably to avoid payment of tax ..” he mused.

Padma came there and stood beside him.

The bank manager finally handed over the couple’s case to the concerned clerk and exteded his hand towards Ravindra.

Ravindra bent forward as if he was committing a sin and explained the reason for his being there in a low tone so as not to be audible to the rich couple.

Not bothering about the uneasiness of Ravindra, the manager calculated how much money he could repay every month from his salary.

“ Have you taken any loan from any other bank?” He queried .

“How much do you pay monthly to clear that loan? “ He directed another query.

Ravindra gave him the figure.

“ From the twenty thousand salary you get after the usual deductions, you are already paying five thousand as loan instalment. What is the amount you can spare as monthly payment for this loan? As per rules , more than fifty percent of the pay can not be duducted from your salary . So you are eligible to get .. “ he gave the figure.

“ If you can not deduct more than fifty percent of my salary as per rules, I will pay the extra amount regularly after receiving my salary sir. This loan is very essential or me. “ swallowing his pride , Ravindra requested.

“ See Mr. Ravindra! I am not paying it from my pocket. We can sanction only the amount you are eligible for, according to the procedure. I don’t have the authority to pay you more. “ The bank manager pointed out in a firm but polite tone.

Ravindra and Padma stepped aside, discussed between themselves and came back . Padma was holding her wedding gold chain in her hands. She slumped into the vacant chair as if she had no strength to stand up.The chair she occupied was the one next to the rich lady who looked like goddess of wealth, dressed in expensive saree and adorned with gold jewellery .

Ravindra felt guilty looking at his wife’s neck sans the gold chain. Her face showed her pain and frustration for pawning away the only gold ornament she had.

Ravindra felt heavy hearted at his inefficiency that compelled him to pawn his wife’s wedding chain to pay his son’s college fee.

The bank manager after assuring the rich couple that they would get their money in five minutes, started looking into Ravindra’s salary details and pass book.

The rich lady asked her husband in a low tone “ will the amount we get sufficient for our purpose ?”

The husband assured her that it should be enough.

Ravindra felt terribly jealous of them.

“Why should God be so very partial to some people? He gives more and more to those who already have more than enough.” This thought caused him heart burn.

“ They might construct another house and rent it out. The children of such people are really lucky. Those parents who can meet every demand of their kids must be really blessed ones. “ Ravindra sighed at this thought.

Padma, who was sitting by the side of the rich lady looked at her husband and turned her head.

“ she must be cursing her fate which made her the wife of a good for nothing fellow like him who would resort to pawning her wedding chain for paying her son’s college fee. “ thought Ravindra.

He wished that the rich couple who were waiting to draw lakhs of rupees would leave the bank soon. He could not tolerate their presence.

When the bank clerk called the husband , he left the room leaving his wife behind.

Padma who could not contain her curiosity asked the lady “ Are you buying a house? In this city ? Where is it located?”

The lady looked at Padma without any enthusiasm. For some reason, her eyes were red.

“No. We are not buying a house. As we can not stay here anymore, we shifted from this city to Anantapur .” She said.

With the absence of her husband by her side, she could not control her emotion and her eyes filled with tears.

“Our son, who was studying third year engineering course in the city college was killed last month in an accident near his college “.

“He was our only child. We don’t know what sin did we commit in our previous birth to get this punishment . We could not live in the house where he was born and brought up. So we left this place . Our son was aspiring to go to America for higher studies. We decided to spend the money we saved for that purpose to educate a poor student every year. So we are donating the amount to the college fund. They will use the interest accrued on the money to sponsor scholarship “.

By the time she finished talking , she was crying uncontrollably.

Padma put her hand on the lady’s hand. Her eyes were filled with tears too.

Ravindra who was listening to the whole episode, felt an electric jolt passing through him.

Not knowing the depth of the emotional abyss they were in, he felt jealous of their riches. He hated them because they had the money which was denied to him. He could not tolerate their very presence.

God, who gave them riches, took away their only child , the beneficiary of their wealth.

He regretted his own poverty. But his children were safe and that was more than riches. He thought those people were lucky. What was good luck? What was bad luck?

He blamed God for being partial to some people. But God stood for justice . He was the dispenser of justice. Our good deeds alone stand us in good stead.

God would dole out fortune or misfortune according to one’s good or bad deeds.

God would give people what they deserved ,from their own account,looking at their balance sheet and according to the rule of law. He would do His job impassionately . “ Ravindra sighed heavily.