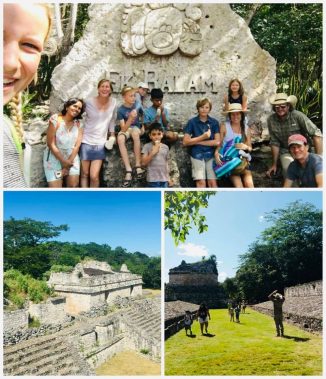 “Have you gone mad? Why would anyone go to Mexico?” asked friends and family in absolute shock, “That too all by yourself with two young kids?”

Well, I never anticipated any dangers that I might encounter. Yet, I did my research and felt that Yucatan would be the safest place to visit. A year before this trip I travelled for 6 months across India, again, all by myself and with 2 even younger kids. The same friends and the family asked me the same question even then.  I absolutely had no fear. Maybe that’s how you can experience the most wonderful things in life. Or  maybe I was really mad!

Christian took me to the nearest city named Valladolid(va-yyaa-dolidh) in case I needed anything that we were missing from back home. There was this big bunch of boys playing drums and singing to attract customers into the supermarket named Super Chedraui  as there was a black Friday sale going on.  We stood there and watched them for a while. “I am in a whole different world” I thought.

I quickly went around  inside the supermarket while Christian shopped for Anahata. I picked some rice and pasta just in case boys get bored of eating black beans and tortillas on a daily basis.  Then I saw these bright yellow mangoes that filled my heart with great joy. I decided to treat myself and boys with mangoes during my entire time in Mexico. Christan got me a local sim card and showed the ATM to withdraw some Mexican Pesos.

Christan was the one who kept things around Anahata in order by making sure we had enough food to eat and that the rooms were cleaned everyday. Patty was the people person. She loved the community spirit and it was her dream to make Anahata happen. Christian just stood by her. They both left their well paid jobs in the USA  and started Anahata. What a perfect pair?

The days at Anahata were just wonderful. Everyday was so different and filled with surprises.

We had this Mexican cook named Alex. She cooked the best soups and the best Mexican food. Those green spicy sauces(salsa verde)that she would make with Habanero chillies were a real treat to my Indian taste buds. To be honest they were much spicier than Indian chillies. She would often conduct some cooking workshops on demand.

Morning breakfasts served by Alex were usually followed by several loaves of Sourdough bread and peanut butter and fizzy water kefir. This was kindly volunteered by a Canadian lady named Maud. She spoke French and English. Without wasting a minute, I made friends with her. I knew these two were gut friendly and had been wanting to learn and incorporate it in our family diet. And then I found her. What luck!

Maud was even more enthusiastic to teach me how to make this stuff. I woke up early the next morning before the Yoga began and we both made some bread in the kitchen while knowing each other more and put a massive jug of  water kefir for fermentation. We added some grapefruits to the kefir that we picked from the garden to try a different flavour than usual lemons.

There is always not enough if I have to talk about Maud. She was very energetic and was a real fitness freak and she would organise these intensive workouts 2 times a day on top of Yoga. Maud worked as a nurse in Canada. The husband and wife left their jobs, rented their house out and started travelling across the USA in their RV along with their 3 young kids. They were on their spiritual journey. Initially I thought the husband was a bit quiet. I tried to avoid talking to him but once we started conversations, I realised what a great person he was to talk to.  We had these lovely discussions around the dinner table about being in the moment, the book about Eckart Tolle and Vipassana.

The family next door was another lovely  bunch. They were from Texas with two kids. The couple always wore these really beautiful cowboy hats and carried their guitars around.

This nomadic cowboy family pretty much travels most of the year. When they needed money, they would go back to Texas, work on some building projects and jump into their school bus that was converted into their home and travel. They even had a converted police jeep. They kept the energy at Anahata alive with their music and sang around the fire every Friday night while kids roasted marshmallows and danced to the music. They always carried a small kit of tools with them to make things as they go.

There were several bicycles in the compound for kids to have a ride around the village. The whole village knows these kids and we had no fear of leaving them on their own. Yet, someone from the community would go and keep an eye on them just in case. Evenings were often spent playing football or dodge ball in the playground next door by both adults and kids. The village kids would come and join. I guess you don’t need to speak the same language  in friendships as friendship itself is the language.

All the kids from Anahata and the village would gather to make bows and arrows and  slingshots. They would go into the forest in the village and find stuff needed to make such things. Sometimes, they would collect whatever they find in the forest like flower petals, twigs, leaves and make some beautiful artwork out of it.

That evening I noticed some flyers stuck around Anahata that said “ Mexico got Talent, all are invited, at 5pm, Free entry in the Yoga hall”

Valentina went door to door to invite parents. We were all quite excited to see what the kids would show us. We all gathered in the hall. Chairs were nicely arranged. One girl stood at the door and showed us where to sit. One by one they started showing their talents like dance, singing, drama, mimicry and Wow! That’s Aarvin with a deck of cards to show his magic skills.

“Where did you learn these tricks?” I asked Aarvin later with a big surprise on my face.

He showed me this really tall French guy from Belgium who has an amazing talent in Magic. Himself, wife and 3 kids travelled across Europe in their campervan for a year and were then travelling the rest of the world.

He just didn’t stop entertaining us with his magic skills. On movie nights, all the kids would gather in the Yoga hall to watch a movie with popcorn and pizza. The adults would gather around the dining table to play games with a glass of wine, some magic  and endless conversations about all of our adventures.

Majority of the children  would vote for a French movie over a Spanish one.

“It’s easier to pick up French than Spanish here” I said to myself.

After each Spanish lesson, Christian would encourage us to go around and speak to the villagers. We would then go to the small corner shops and start conversations in broken Spanish. There were shops selling hammocks woven by the women and white gowns that were beautifully hand embroidered.

I wanted to buy a good sized hammock for my home but I remembered that we were travelling with the hand luggage so we settled for a few tiny hammocks for 50 pesos(3 US dollars)each to give to family and friends.

One day, boys missed chicken very badly. Anahata served only vegetarian food. I had heard about this Pollo(poyo) lady in the village who makes this really tasty fire roasted chicken. I went to her one late evening.

She lived in a tiny mud hut where there was a shop in the front and a kitchen at the back.

She asked me to wait there for some time while she cooked. She had an alluring smile on her face. We both were hesitating to start a conversation. She finally asked

“God, not again!” I screamed in my head.

Didn’t expect people in Mexico would ask me where my husband was.  I constantly heard this question in India and I was fed up with it.

Why would I need a husband to travel the world anyway?

Later I realised, she didn’t mean what people in India meant.

She meant why I had to come alone in the dark instead of sending my husband. I felt better. “Marido esta en Inglaterra” I answered.

“Yay! I got my basics right” I was quite proud of myself. She didn’t know where England was, not even India. She had never heard of those countries.  She didn’t have to know anyway. She was happy in her own little world.

I took the help of google translator to continue the rest of the conversation with her that night while waiting to collect pollo, rice and black beans.

5 thoughts on “My Mexico Adventures – Part 2”