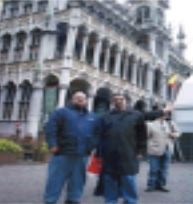 Hemanth was a student of Nizam College and knew both Raju and Naveena. He was working in the Indian Embassy, in Washington D.C and came home to Hyderabad on vacation; He came home to Jubilee Hills and took Naveena’s Bangalore address. He met her there and proposed to her. She called her father and told him the news and Innaiah told her that he didn’t have any objection; she could go ahead if she liked.

It all came together  suddenly. On 12th January 1988 Naveena and Hemanth registered their marriage. We hosted a dinner for the guests at Jubilee Hills Club. Our relatives from Hyderabad and a few close friends attended and blessed the couple. From Hemanth’s side, a number of people were present at the dinner. It was a simple affair.

Naveena’s friends from Bangalore attended the wedding and the dinner. They brought a big bag full of Jasmines as Naveena is very fond of them. Everything went well. Our friends Savitri and Satyanarayana Reddy were our special guests as they were always very affectionate towards Naveena. Hemanth had left for Washington D.C. on 16th January at the end of his vacation.

Naveena was doing her  one -year houseman ship which she completed in November 1988. She came back home and spent 10 days with us and then went to Madras for her visa. She got it along with a work permit. On December 10th  she left for America. We saw her off at the Begumpet Airport while, her Bangalore friends Adiga and Vijay Raj Kocheta saw her off at Bombay airport. She was carrying a big bag full of glass bangles of all hues as she likes wearing them matched to her dresses. Airport authorities at Bombay were amazed looking at the bangles at the check point, she said.

She reached US safely but had  to wait for six hours at the airport as Hemanth was  confused  about the time of her arrival there. Finally they went home.

Soon after they bought a single-bedroom condo in Silver Spring, Maryland, Naveena was to prepare for her exam then called ECFMG. She attended Kaplan coaching center for her examination. She was allowed to work in a hospital doing limited services. From early morning 5 to 7 she worked there and then went to her coaching classes in D.C. She was not driving then. She depended on Hemanth and also on bus service to and fro. Both had to work hard untill she finished her examinations.

Naveena did Internal Medicine Residency at D.C. General Hospital for one year then switched over to Psychiatry – four years of Adult Psychiatry and two years of a fellowship in Child Psychiatry. She worked with Dr. Devoskin and Dr. Joshi for some time and then started her own private practice. Ever since  she has been doing well in her profession. She has earned a good name and gratitude of her patients for her wonderful service to them. She has always been kind, caring and considerate to her patients. She has immense patience  as she loves her profession. She understands the problems of her patients and finds solutions to them. She gives a lot of time to each patient and she treats patients for free when they can‘t afford to pay her but request her for help. Providing relief to a patient is more important to her than money. She embraced life with energy, enthusiasm, tolerance and endurance. ‘Endurance’ is her middle name.

Raju was not much interested in going to America for further studies and work. Naveena had been telling him that America is a place suitable  for his talents. But he didn’t  initially pay heed to her encouragement. Then he began to think of his sister’s repeated requests. He took TOEFFLE exam and he scored 100%. He took the GRE too. but that examination was cancelled as  some fraud was suspected in India.  So Raju could apply to a limited number of universities in America, which didn’t need the GRE scores.

Raju got admission into M.A. in Journalism at Indiana University – in Bloomington.  It was one of the six best universities in journalism at that time. The University offered financial aid for him but informed  him that it would only be  given to him  in the 2nd semester only.

We sold our plot  in Jubilee Hills  and some of that money we could use for his semester expenses. He got the visa and started his preparations to join the University in August 1990.

Raju suffered severe ear ache one week before the travel and the doctor advised him not to fly,  as that would aggravate the pain. But Raju did  not want to miss his chance and took the flight to Washington DC to spend a  couple of days with Naveena and Hemanth and then proceed to his university.

I could not send anything to Naveena through him as he said that he would not risk customs at the airport. I felt bad but there was no way to convince him. He took his clothes and some books with him – that was all.

Naveena said she felt like crying on seeing him at the airport. He looked sick and very run down, but, she took care of him. Hemant and Naveena drove him to Bloomington ,  a long  drive and left him near his dorm. Her heart longed for him, she told me, – leaving him at a strange place where he knew nobody.

But once Raju joined the course he knew it was the place where he could achieve what he wanted. He initially shared an apartment with an Indian Ph.D. student who was a chain smoker. When I heard of it I started worrying about his health.  All my letters to him were full of requests to find some other place to live. He had learnt a bit of cooking from his room-mate though he doesn’t remember any of it now. I could breathe freely when Raju found alternate accommodation.

Raju got an assistantship and financial aid in his second semester. He managed with that and never asked us for any money. He successfully completed his M.A. and got a job at the  Dayton Daily News. The editor Greg Stricharchuk liked his work. Even today they are friends. Greg is in Chicago now. He saw the intellectual spark in Raju, and encouraged him to achieve much more in his field.

17.Tragic Experience for Naveena  and Hemanth

Naveena and Hemanth were happy, both working hard. Naveena was expecting her first baby and we were happy and hoping to be with them for   the child birth at  the end of 1991. With symptoms of high blood pressure and diabetes, her situation however turned critical. They called her doctor Dr. Vinayakam who asked Hemanth to bring her to the hospital. She delivered the baby (Sunith at the beginning of her seventh month of pregnancy) through C-section. Baby Sunith survived for about 10 days. It was such a difficult situation for Naveena and Hemanth bound together by tragedy. No family members were there with them to console and be support to them. They had to console each other hiding the grief and anguish from each other in a foreign country.  Nobody can imagine their condition – Naveena reaches out to people in grief to console and raise their spirits but she can never forget her own tragic experience. That makes her all the more kind, and be able to understand  others’ pain.