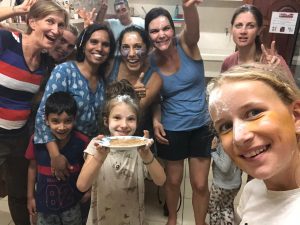 I still remember in my childhood, we had these huge open grounds near a local park, and every year during a festival, many banjara families would come and put up their tents, set their rides to earn some money and stay there for about two weeks and leave to go to a totally new place. They would cook outside and sleep in the tents. Their children just without any fear or anxiety of being in a new environment, would happily play around. They don’t accumulate for generations to come and have no worry about the future. They only take moment by moment of their lives and just live every moment.

We were woken up with these noises outside Anahata and found an old red 4×4 parked in the front courtyard. One by one, people were coming out of the car. First came out a teenage boy without a shirt on, then came two teenage girls in their shorts, beads tied around their necks and wrists and were quite chatty. Then came out mum and dad in their 60’s. They kept unloading the car and there was no end. They took their stoves, beddings, utensils, clothes, and I was only wondering how much this car managed to carry. Then they started drying their beds in the Sun. It felt like they spent a night or so in the rain. Apparently, the girls would sleep inside the car by flattening the seats, the boy in a hammock on a tree and the parents on the roof. It was not a converted campervan; it was just a normal very old car. We later came to know that they travelled like that, through entire Africa and then shipped their vehicle to Mexico and continued to travel. They reminded me of the banjara families from my childhood.

The mum went to Christian and asked if they can stay for couple of nights at Anahata until their beds are dried so they can continue with their journey. Room was given and girls quickly made friends with other girls in the community. They asked me all about India and how they would love to travel in India one day. They were learning Spanish while they were travelling in Mexico. They learnt rangoli and how to make a chapati from me with lots of interest and zeal to learn new things. They were obviously world schooled.

Two more families came to visit for few days. Apparently, the guys were scientists who took a break from their career to travel the world. Few days earlier, at the dinner table, there was a discussion about the world and whether it was round or flat. The cowboy hat family believed that it was flat and gave us a very convincing explanation about why they believed it was flat. Seriously? we thought initially but decided not to upset the family by saying against to their belief as we never gone to the edge the planet to see whether it was round or flat anyway. It didn’t really matter to us, and we loved the family no matter what.  But when these scientists’ families arrived and the same topic came up again, they were furious to hear this statement. I wasn’t surprised. But they ruthlessly attacked the cowboy hat family for saying that the earth was flat. I had to leave the conversation or arguments in the middle to attend my boys. But later, I came to know that the entire community stood by the cowboy hat family and asked those two guys to back off. I could totally see that everyone staying there were already feeling like a one single family and suddenly someone comes and humiliates one of the family members, how would anyone not try to protect? The next day, those two families decided to leave. No one had any issues with them leaving so early. The entire episode didn’t leave good feeling inside us, but that’s how it was.

Patty was planning to go to Canada to get more business. But who will run yoga classes? “Please don’t ask me to do it” I secretly hoped. But chances were that she would pick me, cos I was the one who boasted how I love yoga and how I practise it every day. Patty encouraged me that I would be totally fine, and she left with Valentina to Canada.

“What if I just can’t hold the pose while teaching? The participants would laugh at me” was my constant worry. Then the day arrived, I woke up early and was present in the yoga hall by 6. Few parents came with lot of expectations or so I thought. I went on to do my routine postures and added few more and a bit of meditation at the end and YES!  I didn’t wobble or fall during the tree pose. It went perfectly fine. I had never taught yoga before but that week in Patty’s absence, teaching Hatha yoga, I got super confident.

One by one, families started leaving. More families started joining. It was emotionally intense to say goodbye to each of them.  We all hugged and kissed and promised to meet up again. Maud family left with tears in their eyes. We made some plans to meet later in Progresso.

It was nearly time for Christmas and time for the hubby to come see us. We also had only few days left at Anahata before heading off to have more adventures. We decided to hire a car and have a bit of freedom to travel around as I mostly was dependent on Christian or local taxis. So, I booked a car online and the plan was to go to the Cancun airport by bus and collect the car and husband and drive back to Anahata. It was going to be another adventure as it means I would have to drive on the other side of the road in a new country.

I asked a mum at Anahata to look after the boys when they wake up and make sure they eat while I went away in an early morning bus to Cancun. She assured me that boys would be fine in my absence. I collected the car and husband and started driving out of the airport and Cancun city with alertness and a bit of anxiety. I was hoping that the police wouldn’t stop us as it’s quite common to be stopped by the police in Mexico. As we came out of the city, the roads were dead empty. You could even drive with closed eyes. After driving for 3 hours, we arrived at Anahata. Husband had already heard lots of stories about the place, so it didn’t take much time for him to settle down and make friends.

By then, kids got confident in their own little businesses and came up with several brilliant ideas. Few kids ran a popcorn stall during a movie night. Some set up a raffle stall exactly at the time when other children returned from a tiring trip, so they were all hungry. They kept buying the raffle tickets hoping to win the mouth-watering treats. A little girl made some crafts by herself and knocked each door to sell them. Some made bracelets and sold. The ideas were endless, and the kids didn’t stop surprising us day by day.

It was hubby’s birthday just two days before we had to leave. The banjara family were still there. With the same enthusiasm, she brought a cake for the hubby, and we all celebrated. That night everyone gathered in the kitchen as I had promised that I would teach some Indian cooking. Both adults and kids grabbed an empty wine bottle to roll the dough in to chapati shape, spread melted butter and sprinkled some sugar, folded, and flattened it again and roasted on tawa. There was music, noise and loads of fun.

The day before we left, some Mayan dancers were invited. They wore lots of jewellery with feathers on their heads and their faces and bodies were painted mostly in black. We gathered in the yoga hall again, there were drums, bells and they danced for a long time. It felt like I was in a different world. Towards the end, we all got our faces painted and they taught us some dance moves. It’s always not enough to talk about Mayan culture. There is always so much to see, know and understand.