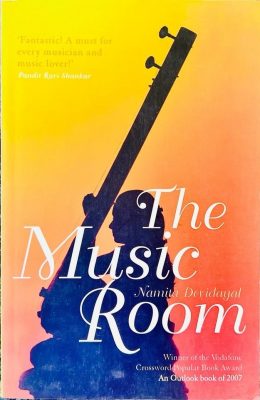 By Namitha Devidayal
(Published by Random House India in 2008)

The author of the book ‘The Music Room’, Namitha Devidayal was born in 1968
and graduated from Princeton University. She is a journalist with the Times of
India and lives in Bombay.

One of the books that attracted me in the collection of my brother was a
fiction/non-fiction (memoire) called ‘The Music Room’ by Namitha Devidayal.
Neither did I know what it was about and nor did I read the recommendation by
Pandit Ravi Sankar on the cover, as the book was neatly covered with a calendar
page to protect it from dust and destruction. What attracted me to the book was
the title. But, after I finished reading it I could not but agree with Pandit Ravi
Sankar – ‘Fantastic! A must for every Musician and Music lover!’

The book was written in first person by Namitha Devidayal, the story of her
teacher Dhondutai as told by her, which includes the story of her teacher’s
teacher Kesarbai and her great grand-teacher Allauddin Khan – khansahib.
Basically it is a rough biography of Khansahib’s gharana in Hindusthani Music
system and a rough auto-biography of Namitha’s life as a music student.

The flow of the story was fantastic, the details were intriguing and authentic and, the story is a revelation of the life of any true artiste – the devotion and
dedication to the art they represent, the eccentricities and idiosyncrasies they
suffer with and their longing to keep their gharana alive and the same time
unwilling to part with their treasure with anyone and everyone. The book also
reveals the longing of an artiste to find that perfect disciple with whom they can
share all their secrets, to whom they can pass on their tradition and trust that
they will keep their name and gharana alive. And, if a suitable disciple is not found
by a true artiste, how unhappy an artiste would be to realize that their ‘Bani’/
gharana would be lost forever.

The winner of the Vodafone crossword book award of 2007, ‘The Music Room’
has everything that an artiste should know and learn about. It is a book that
opens up dialogue within the reader as to look inside their heart and soul to
recognize where they stand in the world of the art that they represent. As one could expect, the book was dedicated to ‘Dhondutai’ the author’s teacher,
whom she calls ‘baiji’. The book is divided into seven portions including a
prologue and an epilogue.

The prologue starts with a quotation of Pandit Vilayat Khan, the Sitar player – ‘A raga should be performed such that, within a few minutes, both the performer
and the audience should be able to see it standing in front of them…’ – a very
useful quote indeed that every true musician should remember! In this prologue,
the author introduces the heroin of the story, her teacher Dhondutai. The
description of the Music Room, the status of her teacher’s mood and the way she
sings the raga Bhairavi sets a tone to the story that is to follow. The author is very
descriptive as to make the scene stand in front of the reader’s eye. ‘Dhondutai
sang with her eyes closed, touching each note with tenderness, as if she was
slowly wrapping herself into a great cocoon of sound.’ is a sentence from the
prologue.

The first chapter called ‘Kennedy Bridge’ covers the introduction of the author to her teacher at a very young age and how she gets her wisdom through her
innocent talk with the teacher along with learning music from her. For a true
artiste their entire wealth is the instruments that they use. They are not mere
instruments for them but are God incarnations. When the teacher was desperate
for more money, as an innocent/ ignorant child, the author suggests that the
teacher could sell her Tanpuras to get money. The teacher breaks down even at
the mere utterance of the words. Such descriptions and anecdotes are all over the
book for even a non-artiste to understand an artistic mind.

What makes the story more interesting and accurate is the commonness of the
artistes which is, they too go through the loss of the loved ones; they too suffer
financially and suffer from common ailments and diseases. The audiences usually
see only the façade of an artiste and become mesmerized by their art. They put
the artiste on a high pedestal and forget to think about the commonness in them.
This book covers all sides of an artiste.

Part III – ‘The Khansahibs’ covers the story of Allauddin Khan’s life and his search for a perfect disciple, who turns out to be Kesarbhai. Here, the author vividly
explains and describes how gharanas are formed and how each gharana
represents a specialty that the gharana guards against all pirating. The story of
Allauddin Khan covered in this section is very touching but makes one realize how
an adversity is turned into an opportunity by a wise man. When Allauddin Khan was appointed the court musician of the princely state of Amleta, he was in constant demand to sing night and day. The consequence was the loss of his voice. For an artiste, his art is his life and hence Khan Sahib gets so depressed that he becomes suicidal. Then his opportunity arrives in the form of a suggestion from a true well-wisher who tells him, ‘Killing yourself is the easy option. Why don’t you, instead, convert this into an opportunity to create something special and unique despite the condition of your voice?’ The opportunity is not in the suggestion but in putting it into practice! Thus, Allauddin Khan’s creation of his gharana came into existence, consisting of intellectually weighty music, presentation of rare, complex and compound ragas, which became the signature of his gharana. What a beautiful turn in life!

The author talks of the last memory of Allauddin Khan Sahib for Dhondutai in the year 1944 during the ‘Vikramaditya conference in Bombay’ where all the greats
from all over India would be showcased and fresh talent is brought to light
overnight. But, what was missing in that chapter was a few names from the
Carnatic world, who may have attended the conference too to represent their
form of classical music. She narrates the competition that occurred between
Faiyaz Khan and Omkarnath Thakur to establish the seniority and stature of the
best in the field of music, in which Omkarnath wins.

The author also reveals how unhappy Allauddin Khan Sahib was before his death in 1946 and also that his funeral was not attended by a large number of followers including Muslims. This reveals how, in spite of being the ‘emperor of Music’ his own Muslims avoided attending his funeral as he called himself a ‘Hindu Muslim’ – ‘he was a follower of Islam but composed thoughtful, profound verses that revealed a deep understanding of Hindu Philosophy. He did his Namaz every day, but sang with complete devotion in Temples. He gave the greatest Gems of his Music to non-Muslim singers. His religion was Music.’

The story of ‘Kesarbai’ is very touching as well as very educational. She is from the Devadasi clan. The author narrates how the changes took place for devadasis to
get into the main stream of the society, their insecurities and denials and how
they suffered in the hands of rich and famous. It was the sufferings of Kesarbai
that changed her into the tyrant that she was known to be. Her choice of
Dhondutai as her disciple to carry her gharana in the twilight of her life reveals
how unwilling the artistes were (and are) to pass-on their tradition to the
undeserved! The fact that the recorded music of such greats did not survive is not because they were not as great as the others but they would rather not leave the
trace of their music to be abused! Not a sound decision may be, but a fact!

This book could be used as a source of information on various topics such as, the society that existed with coexistence of Hindus and Muslims, understanding the
highlights of Hindusthani Music traditions and practices, the teacher – student
relationship, the commitment needed to represent any art, a peep into the day-
to-day life of an artiste and the social behavior of the rich and the rajas. This book
deserves a five-star rating and is a must read for anyone with a passion to read.