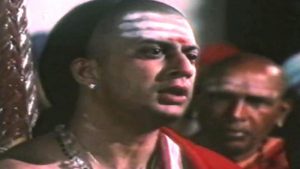 “It is only rigorous training and in depth study that make music mature into the realm of the classical.” – Mangalampalli Balamurali Krishna

Hamsageethe is a film directed and written by G.V. Iyer based on the novel with the same written by T.R. Subba Rao. The film won the Best Kannada film and the Best Male Playback Singer for M. Balamurali Krishna at the 23rd National Awards.

G.V. Iyer started his career in the theater. He made his debut in films as an actor in the film Radha Ramana. His first film as a director was Bhoodana. Vamsavriksha, Hamsageethe, Adi Shankaracharya, Bhagavadgita are among his most acclaimed films. He also made several commercially successful films. He is the only director who made films in Sanskrit.

T.R. Subba Rao also known as TaRaSu started his career as a journalist. His writing was initially influenced by the progressive movement of Kannada literature. He also wrote some historical fictions. Hamsageethe was chosen as a textbook for an undergraduate course. He won Sahithya Academy award posthumously for his novel Durgaastamana.

Mangalampalli Balamurali Krishna who composed music for this film was a legendary Carnatic vocalist and a composer. He invented new ragas and recomposed several forgotten works. Though he acted in a few films, he composed music only for very few films.

The film is set in the 18th century in the area of Chitradurga fort. The film opens at a temple where Venkatasubbaiah comes to pray. He is competing against his guru Tirumalaiah. Venkatasubbaiah wants the best person to win. He wins the competition, but Tirumalaiah who admits the defeat commits suicide. After that incident Venkatasubbaiah has trouble getting another guru as nobody is willing to teach him. One day at night he listens to an alapana and follows the sound to find an unkempt, drunk, stoner singing. After refusing to teach Venkatasubbaiah initially, he becomes his guru. After the guru dies, Venkatasubbaiah returns home to find out that his father passed away.

Venkatasubbaiah becomes a successful singer and the success gets to his head. Soon he realizes this, he renounces his position, and he becomes a recluse. His story and why he had to sing his swan song is the rest of the story.

The film is all about Venkatasubbaiah and his journey as a musician. He is singularly absorbed by his love for music. He neglects everything else. He finds love in Chadrasaani, but he leaves her when she finds out that he vowed not to sing Kalyani and Bhairavi ragas to borrow money to spend time with her. This character was inspired by a real life musician called Bhairavi Venkatasubbaiah.

There are several other characters who are part of Venkatasubbaiah’s journey. His mother who misses him, his troubled guru about whom we don’t know enough, the ruler of Chitradurga, etc.

Music is another important character in the film. It is Venkatasubbaiah’s true love. B.V. Karanth’s background score is very good! M. Balamurali Krishna who was the main composer and singer for the film shows his genius. This is inarguably one of the best soundtracks of Indian Cinema. (I must admit that Carnatic music is my first love as far as music is concerned. )

G.V. Iyer made a wonderful film about a person whose obsession is singular. The direction and the screenplay are very good! He could have made a villain out of Tipu Sultan if he wanted to, but thankfully he did not.

This one of the best roles for Anant Nag who played Venkatasubbaiah. He is an excellent actor, and had a lot of great roles. This will still be the role he would be proud of. Supporting cast is great as well!

Watch this film because it is about music and a man’s obsession, and an excellent one at that.