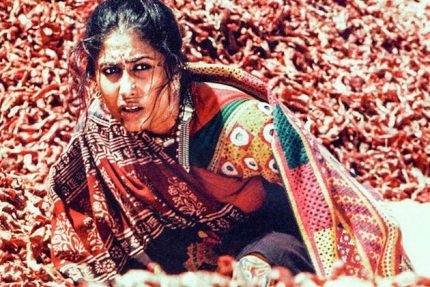 Sexual violence is common throughout the history of humans. It is often used to subjugate women.

Ketan Mehta started his career as a Television Producer for the Indian Space and Research Organization after graduating from Film and Television Institute of India. During his first job he travelled across Gujarat and meeting people, which influenced him in making films. He directed 13 feature films and 4 television series. His last film was Toba Tek Singh which was based on Sadat Monto’s short story. Mirch Masala is Ketan Mehta’s most well known film.

The film is set in the 1940s in a village in the area of Kutch.  The film opens with a group of soldiers headed by a subedar (second highest rank for an Indian officer in the military forces of British India) riding on horses, terrorizing the women who were at the river to fetch water.  There the subedar sees Sonbai and gets attracted to her. Sonbai is proud and happily married. She works at a local spice factory to make the ends meet. The village is ruled by Mukhi the village head. His wife is an independent minded woman. There is also a school teacher who is Gandhian and works for the welfare of the people. The subedar is a womanizer and egotistical. He is also ruthless to the villagers. There are several other characters in the film who live in the village. People in the village are scared of the subedar.

The subedar sees Sonbai again at the garba (a group dance event) and wants her for a night. But he has to contend with someone else. Sonbhai’s husband leaves the village for a job in the railways. One day when Sonbhai is on her way to work, the subedar forcefully touches her and she slaps him. The subedar’s ego is hurt and wants to punish her. He sends people to catch her, but Sonbai escapes and reaches the factory where she works. The subedar gives an ultimatum saying that if he doesn’t get Sonbai, he ravage the whole village. What happens next makes the rest of the story.

The film tries to show the life in the colonial times. People in general were scared of the authority and are wary of the fact that authorities can wreak havoc on their lives. This even more so in the regions that do not have as many resources. Taking away the land for borrowing small amounts of money, and having to pay heavy tax when the agricultural output were not great were common. There was also no recourse. During the colonial times, people couldn’t complain against the local tyrants. Some people were idealists working to gain  independence from the British. They are looking to reform the society by trying educate girls and questioning the authority.

This film also deals with a lot of women related issues. The sexual violence perpetrated by the tyrants, lack of acceptance of girls going to schools in a small village, women having to deal with philandering husbands, etc. There is a girl named Radha who is in a relationship with the brother of the mukhi, but cant get married to him because the girl comes from a poor family.

There aren’t many Indian films about female friendships. This one of the few films that shows women facing adversities working together and trying to overcome them. The film’s ending is superb and  is a master stroke. It is optimistic and fulfilling.

The film has several strong women characters. Sonbai is feisty, she is not scared and is ready to have a fight. Even under intense pressure from people around her, she does not want to give up and surrender to the subedar.  Saraswati the wife of the mukhi is fed up with her husband’s philandering ways. She decides to send her daughter to the school, and organizes women in the village to oppose when the men decide to cooperate with the subedar to pressurize Sonbai to surrender. Radha who sneaks away to meet her lover despite her family opposition, takes matters into her own hands in the end.

The film featured some of the best actors of that time. Smita Patil as Sonbai was fabulous. This is considered by many as her finest performances. She acted in quite a few excellent roles before she passed away at a young age in child birth. Naseeruddin as the subedar was excellent as well. He brings the cruelty and the ego this role needs. Om Puri played a role of an old guard factory Abu Mia. He was thirty seven at that time. He was excellent as a upstanding guard. Last but not the least is Deepti Naval who played the role of Saraswati gave another great performance. Her roles demanded her to be a tigress, and that’s what she was.

Cinematography by Jehangir Choudhury was excellent, it captures the landscape and the beauty of Kutch area very well. Shots of the chillies were superb in the film.

The sound track composed by Rajat Dholakia is beautiful! It is part classical and part folk songs of the region.

Watch this film for what has to offer, a peek into life in British India. When we take our life into our hands we win. We are our own heroes.