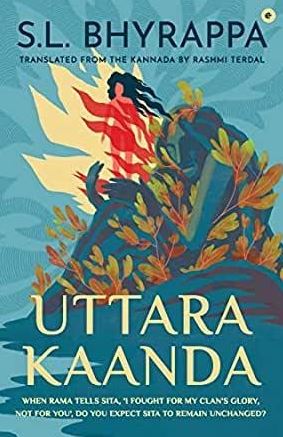 UTTARA KAANDA is a novel by S.L. Bhyrappa. Originally written in Kannada this is translated into English by Rashmi Terdal. Bhyrappa is a popular name in the South India and we all are acquainted with his sensible writing style and logical representation of the mythologies.. While PARVA is one of his best books on Mahabharatha, this novel brings us the story of Ramayana from Sita’s point of view. A lot of modern writers have been writing on the mythologies lately through different perspectives. Bhyrappa’s style stands different from all of them. He does not try to change the main story of Valmiki Ramayana. He just tries to make it a little logical. This book is totally written through the perspective of Sita, yet the main story remains unharmed. Laxman becomes the prominent hero in this book.

The novel starts with Sita feeding her babies Luv and Kush at Valmiki’s ashram. She is trying to get used to the Ashram life and is working to fit into the role of a young mother. Her maid Sukeshi is with her. She comes to the Ashram to help Sita being her long time associate and friend from her parents house. From here the story moves on in flash backs and Sita recollects how she was brought to the ashram by Lakshman. Lakshman is not on speaking terms with Sita and remains silent throughout the journey. She tries to start a conversation with him and tries to apologize for her behavior on the day she was abducted by Ravana. She knows that Lakshaman is angry with her and she also feels guilty for hurting him. But Lakshman does not give her the chance and travels in another chariot and when she is dropped at Valmikis’ ashram she is shocked to know that her husband Ram has left her in the forest because he wanted to satisfy his people who doubt the chastity of the queen Sita. Sita enters the Ashram and after the birth of her twins her sister Urmila visits her regularly. Lakshman sends her the food supplies and indirectly takes care of her.

Sita goes back to her story at her parents house and tells how she was found in the middle of a field and was adopted by King Janaka. Her parents were kind to her but the knowledge that she was not their own child always kept her a little distant from them. When Ram comes to the swayamvar and wins her, Janaka sends word to Ram’s family but his father Dasarath does not agree for the marriage as Sita is not Janaka’s own daughter. Ram convinces his father that by accepting to take part in the swayamwar he has committed himself to her and therefore he cannot go back on his word. He is not interested in knowing the details of Sita’s birth but is ready to accept her as Janaka’s daughter because that is the only rightful thing at that moment.

Sita previously heard how Ram has helped Ahalya reunite with Goutham after she was abandoned by Gautham due to her infidelity. Ahalya stays alone in a hut refusing to meet people and when Ram comes to her hut and sees her pathetic situation he feels a moral responsibility towards this lonely woman and goes all the way to the Himalayas to convince Goutham to accept his wife back. Sita is moved by Ram’s kindness and when she hears that he also convinced Dasaratha to agree for the marriage she falls in love with him.

Once they are back in Ayodhya, Kaikeyi’s boon and her wish to make her own son Bharatha the king compels her to expel Ram from the kingdom. She asks him to discard worldly life and live like a hermit. Sita follows him and Lakshman also accompanies the pair. Urmila refuses to follow her husband and stays back. Bharatha later finds out what has happened and knowing the popularity of his elder brother and the repercussions of his mothers folly apologies to Rama but Ram does not return back and decides to complete his period of exile.

During this time it was Lakshman who took great care of the couple. He used to bring food, grow food and build huts for their survival. He was immensely talented with procuring food and had all the survival instincts and techniques which helped them in the jungle. When Sita wishes for a golden deer, Ram goes into the forest but when Sita hears someone calling for help, she asks Lakshman to go into the jungle and look for Ram, When Lakshman denies hearing any cry for help she accuses him that he is jealous of his brother and sister in law being together and so wants to possess her. Lakshman who becomes extremely angry goes into the forest in search of Ram.

Ravana’s soldiers take Sita away. When they reach Lanka, Sita meets Ravana who pleads her to accept his proposal and agree to be his mistress. Sita refuses him and Ravana keeps on trying to convince her. Vibheeshanas wife comes to see Sita and through her she finds out the family politics. Hanuman comes to visit her and gets into the city to find out the secret routes. Finally Ravana is killed. Ram does not come to meet her immediately, instead he makes Vibheeshana the king. Here a logic is explained that once Ravana has abducted Sita she becomes his property and therefore shecan only be released by the next king. After meeting Ram, Sita is surprised when he remains aloof and demands proof of her chastity. It was then that Lakshman interferes and he convinces Rama saying how will Ram answer the question if Sita asks him to prove his chastity too. He convinces Rama to accept Sita and they go back to Ayodhya. But here when the people of the kingdom start talking bad about the pregnant queen Sita is left in the forest.

Lakshman does not like his brothers decision, and so when he leaves Sita at valmiki Ashram, he goes back to his village and lives there with his wife. He choose to be away from Ram and Ayodhya. When the Ashwamedha horse is captured by Luv and Kush and they do not agree to release it and invite war, Valmiki takes the children to Ayodya. Sita is also called and there she questions about Ram’s dharma. This conversation is the important part in the novel where Sita’s anguish is poured out and Ram tries to answer her. He says that the people of his kingdom were taking advantage of Sita’s situation and denying payment of taxes. As a king he had to decide the future of Ayodhya and hence had to leave her. Now Sita questions about his hesitancy to accept her after Ravana was killed, and Ram has nothing to answer now. Sita goes back to the ashram. She also finds out that now her children have grown beyond her and that they chose their father over her. Her role as a mother has ended. She decides to move back to her fields and till the soil for her living. Ram requests Lakshman to train Luv and Kush with the administrative things as they do not have the real respect towards him. Lakshman agrees. One day news reaches Sita that Ram has left this earth by getting into the Sarayu river. Was it an accident or an intentional death is not known. Sita also dies embracing the mother earth and the family offers their prayers.

This is the same old Ramayana but Sita is the woman who questions, thinks and demands answers for her situation. She also expresses her doubts about Rama’s dharma when she finds out the story of Tara and Sugreeva. She is confused at times regarding her husbands decisions and has her own anguish and logic regarding her relationship with her husband. She finally concludes that the Ram she had loved has disappeared once he became the king and she cannot love the king the way she loved Ram before. The greatness about this book is the writer has put so much of logic and questions into the story and still makes it convincing to the traditionalists and also to the modern thinkers equally and that makes Uttarakaanda a good read. I do not say that this is in par with his PARVA but it definitely got the style and structure of that masterpiece hence reading this book remains an enriching experience.

No one has attempted to write the story of Ramayana especially the Uttara kaanda through Sita’s point of view. Ramayana has an emotional bond with the common man hence by taking Sita’s side and questioning Ram there was a fear that the character of Ram becomes negative. Bhairppa through his expertise writes this through Sita’s perspective and still succeeds in making it appealing to the traditional reader. He has been so careful with this style that no one gets hurt by this change of perspective and it adds authenticity to a lot of incidents.

Another main point to be noted is, Bhyrappa did not touch the mythological stories which seem unreal. Like Ahalya becoming a stone, Ravana carrying Sita on his shoulders and flying away to Lanka, Hanuman as the monkey headed man with a long tail he uses to burn Lanka, and the demons in Ashoka vana. These stories are left aside as he believes them to be imaginary and he gives a logical presentation to the same story. Hence this appears as a make believe story to the non believers too and more importantly presents the characters of Sita Ram, and Lakshman in a respectable manner. I appreciate the writer for his attempt to be so specific in maintaining the balance through out the story and that’s the secret behind the satisfaction a reader feels after reading this. This latest Bhyrappa’s book which broke all records regarding books sales in Kannada is very well translated into English and is available to those who cannot read Kannada but still look forward to read Bhyrappa’s works in translations.