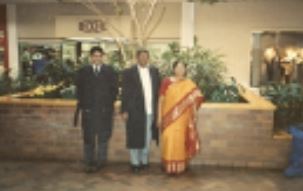 18.Our First Trip to the US

We were anxiously waiting to be with Naveena and Hemanth hoping to be of some support to them. We got our Visas by the end of January, 1992 and reached America on February 3. All of us have hidden our sorrow from each other and behaved as if everything was normal. We stayed for six months – I know it was too long but some how we couldn’t leave them early.

Naveena was doing her residency, real hard work for doctors on duty, with 36-hours stretches on some days. She used to get very tired and the moment she touched the bed she was fast asleep.

Naveena wasn’t driving then. But she showed us all important places and landmarks in Washington D.C. We travelled by buses and Metros. They were living in their three bedroom apartment in Silver Spring and from there bus service was convenient. We saw all museums, malls, the Baltimore Aquarium and many other prominent places.

Raju came down from Dayton to visit us. That was a heavy snow day. Hemanth picked up Raju from the airport. Raju spent the weekend and left for Dayton.

Raju booked two  round-trip tickets for me & Innaiah – from Washington to New York, Chicago, Los Angeles, Arizona and back. But I was suffering from spondylitis.  Innaiah took the trip. He stayed with Naveena’s childhood friend Manohari’s   parents in Los Angeles,  – Dr.Annapurna and Mr. Varma. He went  to the Grand Canyon. My ticket was, however, wasted as it was not refundable.

From February to April it was a very cold season with many snow storms. We saw snow fall for the first time. Most of the trees shed their leaves and were naked though before we left America, they got back their dresses (leaves).

We spent one month with Raju in Dayton as well.  He was living in a posh apartment. We contacted some Indians on phone introducing ourselves. One Mrs. Janaki Venkayya became our friend. She took both of us to Home a Rama where new home models were on display. We enjoyed the trip. Raju’s friends from Bloomington also visited us. We all went to Cincinnati Zoo. Raju took us to Bloomington and – the Indiana University campus where he studied  Journalism. He also sent us to Columbus, Ohio, to visit an exhibition, – Ameriflora which ran from April to October. There various countries represented showing the special features of their countries. India’s was a poor show. We saw a big chunk of Berlin Wall and also red cacti from Korea. It was a daylong trip and we really enjoyed the day.

In Dayton we saw the police patrolling on horse backs. When Raju was at work both of us made trips to various places, using the bus service.

Three rivers – Mad River, Silent River, Miami River flow through Dayton. On our morning walk, we met some African-Americans who showed interest about India and put many questions to us about Indian way of life. We visited the Greek Orthodox Church and the man – in charge told us about their faith and activities in their church.

Dayton is famous for many ‘firsts’. Wright Brothers, who were credited with inventing and building the world’s first air plane and aircraft controls that made fixed-wing flights possible, were from Dayton.

Raju took us to the annual Air Show there. We enjoyed our stay in Dayton. We located an Indian store far away from Raju’s apartment. We took a bus & explored and bought some Indian food from that shop.

Both of us one day went to an Indian Restaurant. Raju commented that we should have chosen non-Indian food place because we always ate Indian food at home.

We then returned to Washington and left for India by the end of July ’92.

Since we already had a five year visitor visa, we didn’t need to go for a visa interview again. Naveena  was six months pregnant by then and she was advised bed-rest by her doctor. So we came back to be with her. I took long leave from university to be of some help to Naveena.

She was advised strict diet to control the symptoms of diabetes and hypertension and she strictly followed the instructions of her doctor.

By then,  they had bought an independent house in Olney,  Maryland. – a four bed room house.

Just three days before Rohit’s birth we celebrated Baby Shower for Naveena. As it was the ninth month, we arranged the trays with nine kinds of sweets, fruit and saris. Hemanth presented Naveena with Navaratna Necklace- a real beautiful piece. Many friends attended the function.

Angela John prepared these nine kinds of sweets for the occasion. Glory, Queeni and Radhika, among other friends of theirs, were present and made the function a success.

Our grandson was born on 11th May 1994,  the happiest day for all of us. He was named Rohit Joshua Samson. We were grateful and happy to be the proud grand parents. As it was a caesarean  case Naveena stayed in the hospital for  four- days. By the time we brought the baby home there were so many Jasmine flowers in bloom in the house welcoming the baby. Naveena’s friends Noble Roberts and Sarah also joined us at home.

We spent all our time with Rohit, -a beautiful boy. After two months Naveena had to get back to work. Innaiah and myself looked after the baby. We enjoyed being with him each  second of our stay. He was a happy baby and we had no trouble in raising him. Naveena used to call from work, -three, four times a day, to find out how her darling son was doing. I became very possessive about the boy and wanted to carry him all the waking hours. It was a real blissful time talking to the boy, reading stories for him and the time flew fast. We even extended our stay applying for permission to do so. We didn’t feel like leaving the baby and going back home. Naveena used to miss all that pleasure of being with him as she was working there to complete her residency.