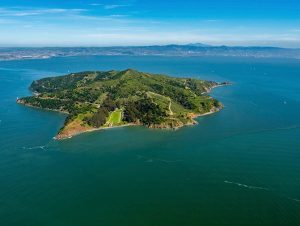 America Through My Eyes- Angel Island

Of all those islands surrounding San Francisco province, Angel Island is large. The island was used for military purposes in the early 19th century; however, it is now a national historical location.

TRIP: Angel Island is forty to fifty miles away from our house. There are at least two to three routes to reach out there. We get ferries from San Francisco, Tiburon, and Valero. Though San Francisco is near to our residence, the distance is more on the boat travel from there, besides that the parking fee is relatively very high in San Francisco. Above all, we can’t get tickets for the last moment trips. For all of these reasons, we have decided to board from the Tiburon ferry terminal, where the boats launch every hour. We have experienced after traveling that it’s quite a tedious one. We have scheduled a one-day outing, so we started at 9 a.m. at home to reach Tiburon at least by 10 am. Passing out the San Francisco outskirts, we needed to get through the Golden Gate Bridge and headed north 15 miles. But we have forgotten about the weekend traffic jams in San Francisco City.

Steaming Fog streaming: It was 11.30 a.m. when we crossed the Golden Gate Bridge. The fog clouded densely around. Funnily enough, the mist was confined exclusively to the bridge. The fog was so abundant that it was just like torrents of clouds seemingly gushing from the highland hill to the sea coast or from the sea coast to the upward hill. We weathered a streaming river that perhaps blocked the Highway from the sky when we peeped out from the windshields of our cars. We ignored the displeasure of traffic delays, engaged in the warmth of the panoramic marvel.

We slumped in the queue for half an hour for boat tickets. We explored ten to fifteen minutes for a hotel to hurry up lunch as we booked tickets for the boat leaving the next hour. All were heavily packed with passengers. Somehow we finished lunch in a hotel hastily and dashed to the boat. A sour bread, butter, fried chicken, Macaroni cheese and a few French Fries… that’s all! Indeed we didn’t get sufficient time to enjoy our meal, particularly in such a place where the seafood is abundantly available for relishing peacefully to the heart’s content.

It’s hardly any time than waiting for it. We trod there sharply in half an hour on the Angel Island that has been prevailing before our eyes charming for two hours. A cafe was thereby taking a right turn from the ferry terminal. There they sold bus tickets for sightseeing around Angel Island. Satya stood up alone in the line as the queue was long.

I led the kids, walking ahead to a nearby tree front to the museum for a shade to escape from the scorching sun, and sat down under the tree closer to the beach. Children played in the cool water, but I didn’t allow our kids to play with them, as we had not brought extra dresses for them. They began playing in the grass, running hither and thither, forgetting all disappointments. I recalled Catalina Island though not no particular similarities to this. Satya found us after an hour of waiting and said that the bus is about to start. We rushed there at once.

There was no village in particular on the island, except few dilapidated ancient buildings. We can only watch precise disintegrating structures, doorless buildings, which were somewhat more significant than structures we could see in Bheemunipatnam.

During 1910-1940 the immigrants from other countries, particularly from China, kept here in the name of immigration check-out before landing in San Francisco. Despite their years of stay in San Francisco, if anyone went to their native land while staying there, they should get through this check-out without exceptions. The anticipation sometimes took off even a couple of months and years. In 1970, when these waiting occupancies were about to be emptied, hundreds of Chinese verses engraved on the wooden walls by knives came to light—the lapses in the immigration system unraveled only after reading some of those verses to the outer world.

During the Second World War, the territory was used for military training, warfare maneuvers, and a Missile Center. Injured soldiers were quarantined here. Gradually the island was kept solely for quarantine purposes, and the rest of the services switched to San Francisco.

In 1960 the area was transformed into a protective State Park. Visitors can see the Missile Center in its decayed state. We were satisfied watching it from a long distance as we weren’t let down from the bus. If anyone wanted to see anything personally on the island, they had to hire bicycles and get around by themselves. It’s a fitting location for those who love Trekking, Cycling, and Long walk. However, the bus journey was preferred for the visitors like us who accompanied by children and winded up the tour by evening.

We enjoyed the Incredible scenic beauties of lowlands through the bus traveling, the undulating beautiful blue gleaming waves, and the maneuvers of the tiny yachts resembling our childhood knife-model paper boats and the footprints of those dwarfed urban buildings left on the surrounding mountain ranges. When we headed furthermore enjoying these fabulous moments, we witnessed antique structures mumbling those unsung stories, shedding off those memories from those walls, and the heartbeats reflecting upon those walls, nameless shrubs, eucalyptus thickets, and sudden dry fodder blades of meadows spree. They halt the bus at one or two places for snapshots. Many visitors prefer coming there to take photos of San Francisco and the Golden Gate Bridge. All day long, however, we couldn’t see any spectacular views due to the fogging, mainly between these two territories. Of course, that’s also a great moment. We could watch only the ridges and the rims of those structures. The rest of the area was just like a  beautiful sprout suddenly emerged, leaving the midpoint of the sky by the devouring demons of clouds from either side on the exquisite line sketched like an oil painting with a silver blazing brush stroke. The highest peak of the island is called Mount Caroline Livermore. They lit electric lights every December, dispersing shafts of glimmering focus from the summit.

In 2008 the wildfire broke out and devoured one-third of the island area. Somehow the fire was put out by nightfall and could save the old structures.

It’s barely one and a half miles from the island, yet; its history is relatively expansive.

When the bus tour ends, the museum and the video sessions in the visiting Centre give you a lot of fascinating details. Certain engraved wall composing verses melt your heart when they are heard.

A lengthy vacation, lonesome detention, after a terrific hazardous most extensive voyage, striving to step into the land, it’s like a proverbial plight, ‘as though  God blessed, the priest has not opened the door’ and waiting there until the last minute and the agony they undergo during their stay in the confinement witnesses to our eyes greatly disturb our soul.

We watched in a video the immigration authorities question a son who came to live with his father here. How many windows were there in your home? How many houses were there in your street? Such questions were hurled to them in separate interviews, and if the answers were not alike, they had to go back. The questions were so frivolous that people thought that getting a VISA was altogether a lottery for them. Sometimes a  proxy son attends the interview process after a thorough preparation to get through the barriers.

Such questions might not be solicited presently or need to wait for such a prolonged duration on the island. Yet, the VISA regulations are not changed considerably! Strict regulations, hours of waiting, Can’t we comprehend how aspirants are spinning around the VISA God making 108 turns around him? Human beings are more prone to weigh upon mental power rather than human endeavors.

A verse found on the walls:

Being idle in the wooden building, I opened a window.

The morning breeze and bright moon lingered together.

I reminisce the native village far away, cut off by clouds and

On the tiny island, the waiting of cold, wild geese can be

The poet at the end of the road can only ascend a tower.

One should know that when the country is weak, the people’s

Why else do we come to this place to be imprisoned?

The suffering of the soul is similar though men are different around the world. When we heard of the tragic episode of the island, obviously, tears of these people trickled into our eyes. About 5 p.m., we boarded the boat and got down in the Tiburon in a half hour. When we glance back, the ‘Angel Island’ is there with its serene smile. I wanted to stay some more time there staring at the island for no reason. The whole island is visible if we walk ahead right-hand side of the ferry terminal. From there, if we stretch our hands, the entire Island comes into our hands. On our way back, very casually, we caught up in the traffic jam on the Bay Bridge. I thought it would be an excellent relief to travel more length with the heaviness of ecstasy and the agonizing pain in the heart—the Golden Gate Bridge shimmering with neon lights with its new glorified sparkles in the night sky. In the backdrop, the Angel island draped the wavy wraps of darkness around and bid farewell to us  silently.