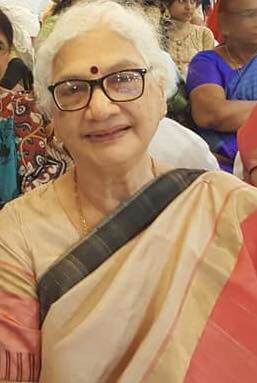 Do not turn the clock back by D. Kameswari

Grandma- “Yes, I read it sometime around 2005, but I may not now be able to even hold a book that heavy.”

Grandma: “Yes Ravi, but the advantage is that you need not read it at a stretch because it’s a collection of short stories. advantage then and now too. You need not read it at a stretch. It is a collection of short stories written during the last century. At that time, they believed that the short story in Telugu began in 1910 and they collected stories of prominent writers published in every decade – a collection of 108 stories. You need not read in order. Each story is independent and tells us something about the times. All trends that Telugu story witnessed throughout the last century can be seen here. It is a great literary experiment and many during end of the last century brought out century collections like this. Volume -wise and the literary contribution wise this was a remarkable work. To appear in this volume is in itself a recognition.

Ravi: “Okay, grandma, today my friend Jane has come to see me as we have a class assignment to do together. When I told her about our story time every week, she was quite thrilled. Do you mind if she joins us today? She is very interested”

Grandma: I have no problem. But she may have, as we in India think differently about certain issues even in this computer age and the age of globalization. She might find our thinking a bit outdated, viewed from the western perspective.

Ravi: I don’t know but once we can oblige her, see her response to Indian stories.

Grandma: They are as old as civilization. Story telling was there in Indian tradition for generations and mothers and grandmothers have been the fountains from which stories emerged earlier. One can say it is a continuation of our oral tradition. But print story that we read today has emerged from the time our interactions started with the west.

Ravi: let’s start Grandma. I will call her. I am sure you will like her.

Ravi and Jane sat together to hear grandma’s story.

Grandma: I hope you will like the story specially the issues that come up here are of great significance to Indian youth even today. The story I am going to discuss today is called “Do not turn the clock back” It is a plea obviously. Written by a writer named D. Kameswari, Durvasula Kameswari was a writer of the later half of 20th century but her writing overlaps in this century also. Now an octogenarian she has seen in her lifetime three generations of writing and locates herself somewhere in the middle. She is modern and progressive in her ideas and at the same time one gets a feeling that she is also cautions about the dangers of going too far as far as the modern thinking and attitudes are concerned.

Without much ado I will tell the story in brief. It opens with a conversation between a modern age daughter and a progressive but cautious mother. This is about excesses, about mother-daughter relationship, about the twin values of loyalty and trust in relationships, here, particularly between mother and daughter. The daughter asks her mother in a very casual and matter-fact manner that she needs to go to a doctor for a check-up. Chitra was a young unmarried twenty-year old girl. She tells her mother in the same casual tone she missed her periods and all that happened because her boyfriend told her nothing would happen if they do it in safe period. Her mother Kalyani was shocked. Here many thoughts occur to her in a brief period of time. In India in cities girls who think they are modern may go for pre-marital sex but they take care not to become pregnant. If by accident any such things happen, they go for secret and silent abortions. In foreign countries these things are very common. she has given freedom to her child and all liberties to discuss her problems with her. But to expect the family background and the values they grow up with help them to opt for a disciplined and self-controlled life has become too much to expect. The world outside is too very complicated for them to resist temptations. Peer pressure and exposure to the kind of technology that encourages freedom to go beyond what they see around them since childhood gives them tough time. They cannot stay at home and confine to safe options when everything around them is offering temptations. Electronic media, cinema and social media all are giving them access to an adventurous and dangerous world.

Kalyani has always been a woman of progressive ideas. When her parents wanted to marry her off after intermediate, she fought to join graduation and after that she secured a job in the bank and rose to a senior position gradually. She wanted that her daughter should never face problems like she did. She believed in economic independence for women and wanted to bring up her daughter with the same spirit of freedom and independence. Her husband was always critical of the way she dressed Chitra and the way she encouraged her to go to school on her own on a bicycle and many aspects of freedom she got right from her childhood.

Now she scolded her daughter for her casual attitude and pushed off to her office in a hurry as she was getting late for a meeting. But after two three days the daughter wakes her up complaining of severe pain in the stomach. The parents rush her to the hospital. Kalyani had to tell her husband about her daughter’s problem. He was composed and gives her all necessary support and did not show his anger to his daughter but he was angry with his wife. She had to spend critical time at the hospital and the doctor told them it was incomplete abortion that caused the problem and warned how she escaped serious consequences.  Chitra realised that even if they curse her and scold her parents were the only beings who would stand by her anytime if she needs help. Chitra tells her she had learnt her lesson as the boy who was responsible for her predicament neatly escaped from all responsibility. Her mother then tells her that now that she has proved her husband’s point of not giving too much freedom to girls, she must be prepared to face all the discipline he would be imposing. She knew the dangers of the modern life even though she was giving her all the liberties and when she saw many people getting into problems, she thought of giving precautions to her but she did not as that would give a wrong signal that she approves of such free lifestyle. She did not want to suggest any caution as to the precautions to take when going out with boys as she believed her daughter would be more mature in her behaviour. Chitra on her part understood the sense in her mother’s logic.

The story gets full marks grandma” tells Jane to Ravi’s grandmother. It explains everyone’s point of view. As you say we in US do not consider it a sacred thing to protect and cherish and Indian girls are taught to give it as a gift to the only Mr. Right they will ultimately share your life with. Even that is not an unbroken relationship for us.

“In India now-a days people are changing too especially in urban locales. As they should if life becomes tough with an abusive individual. If some one is not worth living with it is better to get rid of such abusive relationships. But the age- old values of commitment, loyalty and love for this life and beyond would never go easily. Marriage happens to be a very strong institution in India still and Kalyani inherits that and through her Chitra also gets her orientation,” concludes grandmother.