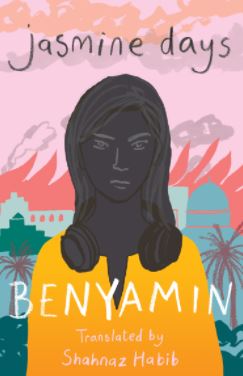 JASMINE DAYS is a Malyali novel written by “Benyamin”. It was first published in the year 2014. It was later translated into English by Shahnaz Habib. This novel won the JCB prize for literature which aroused interest among the regular readers. Benyamin says that he drew inspiration from real life incidents for the plot of this novel. During 2010 there were a lot of protests, and rebellions in the Arab world. These protests started in Tunisia and later spread to many Arab countries. This was called as the Arab Spring. Benyamin’s novel describes the times during the Arab Spring. He does not mention the city or the country where these incidents occur but we understand that it is a Muslim country where a lot of immigrants join together to live a peaceful life.

Sameera Parvin is a girl from Pakistan. Her relatives along with her father are working in a far away country. Her father’s elder brother is the head of the family fondly called as Taya. He works in the Police department in an Arab country, and  he was the first to leave his homeland and come to a foreign land. Slowly he helped his brothers to relocate to his place and fondly took care of them. His brothers were married, have their own families and they are happily settled and are now citizens in the new country. Sameera’s father who is referred to as baba in the novel by her, is a sensitive and timid gentleman. He also joins the police and works for the government. He is able to earn enough but not that much to support his family. Hence his wife and children stay back in Pakistan. They depend on his money for survival. Sameera completes her graduation and because her teenage rebellious attitude becomes unbearable, her mother sends her to her father.

In this new country Sameera feels that her extended family is indeed leading a luxurious life when compared to life back in Pakistan. During her childhood days she always mistook her father’s gentleman behavior as foolishness. But when she starts staying with him she gets to know him as a loving husband and a doting father. Taya finds a job for her as a Radio Jockey and she enjoys her work. She gets acquainted with the mixed circle of friends at office. Some are Indian Malyalis, and others are from different places. She tries to adjust to this cosmopolitan life style. Back in Pakistan Sameera was passionately pursuing her Guitar lessons though music was prohibited by her mother. In this country too she is able to join a music group and enjoys their company. Ali is an employee from her office and he plays guitar very well. He introduces Sameera to the music group and both of them become good friends.

Sameera enjoys her life in the rich country, the luxuries provided there and the freedom bestowed to her. But she finds severe enmity between the Sunnis and Shias of the country. Ali is a Shia and he believes that the country rightfully belongs to them. The ruler known as His Majesty is a Sunni and the Sunni’s dominate the country. Ali dreams for that day when he and his brothers are truly liberated and are allowed total freedom. Sameera is not able to understand this concept of liberation. She feels that the country is rich, has given good opportunities to immigrants like her and also all the privileges she enjoys now. She does not understand the bitterness behind Ali’s worlds. Ali slowly introduces her to the Shia Sunni hatred and he explains how his father was taken away by the government and has gone missing since eighteen years.  His mother goes to the government offices even today with a hope that she can find some news about him. Her uncle was caught and tortured secretly by the government during the revolt and was imprisoned in a cell for eighteen years. Sameera meets this uncle and understands the long rivalry between these two sects. Things go on normally until one day the revolution breaks.

Many young Shia muslims join together to protest against the government and demand the change in the government and His Majesty’s resignation. At first it starts like a picnic, Protesters enjoy their freedom of speech and join together in a market place and camp there protesting against the government. After the revolution comes into the open, situations change in the country. The hatred between the two sects is displayed everywhere. Sameera is surprised to see how her own colleagues who were so attached to one another also take sides .

Sammera belongs to the police family and therefore though she secretly wants the revolution to succeed she keeps herself away from the political activity. The men of the family go out to stop the protest as they belong to the police force and during one such raid Sameera’s father dies. Sameera is shocked with the turn of events. After a few days of absence she joins her job. But she finds out that her father did not die in an accident but was murdered and the murderer was Ali her close friend. Sameera also watches the death of her father which was recorded on camera which got posted in You tube. She watches how brutally Ali killed her father and she is devastaded.

Her family members do not want her to stay in the country. Government announces money for her father’s sacrifice and the family wants to keep the money for themselves. Sameera is against it and therefore she becomes unwelcome in her uncles’s house. She slowly tries to gather information about Ali. It is then she seriously tries to understand how bitter things are. How people like Ali who had a bad past are brainwashed by the politicians or religious leaders for their own selfish motives. An old friend of the music group meets Sameera and he helps her to understand that though it was her father that Ali murdered but at the time of Murder he was angry against the injustice done to them since years. The anger has drowned him into such fitful  rage that he forgets that the man whom he is hitting by the car is his dear friends father. Engulfed with hatred, which was injected into him since years, he acts accordingly and kills a man who is a father figure.

Sameera tries to see things from Ali’s perspective. She knows that Ali is a kind hearted soul and she also knows his past in detail. She agrees that the anger with which he was subjected to while growing up and the tragic circumstances which he had to face loosing his father, a brother also to the revolution gives birth to a lot of anger against the government and the people around. This hatred forces him to kill an old man just because he represents the government. While killing the old man he does not remember that it’s a human life he is taking out. He believes that by hitting the old man he is challenging the oppressor. Its how his brain was tuned to violence, which has to be understood here. When Sameera thinks on these terms she feels sad about the whole situation where the protestors and the Police both were playing Victims and are unnecessarily used as pawns for someone who wants to strengthen his power. She also thinks about forgiving Ali and also mentioning the same to the authorities.

Meanwhile the authorities understand the intentions of Sameera and therefore they come with a proposal that they are ready to give away the prize money and also take care of the family and children of Baba. But they demand that Sameera shoule leave the country and go back to Pakistan. Sameera declines the offer. Her Taya shows her how women in the country are tortured if they go against the government but still Sameera decides to help Ali because she says that this is not going to bring back her Baba. Finally Sameera is put under house arrest and it is here she writes this novel and sends it to her publisher friend Javed. What happens later is not mentioned in the story.

The novel has some great logical discussions about violence in Muslim countries. A man from Iraq who was once the supporter of Iraqi war, and rejoiced when Saddam was killed talks about the state of affairs in Iraq in the present moment and declares that sometimes it is better to live under a Dictator that in ambiguity. He explains the state of affairs in Iraq which have gone to the worst after the death of Saddam. He does not support Saddam and his policies but he says that by killing him and taking back power it did not help the Iraqis much because the internal politics have robbed them of the little peace and happiness what Saddam has left in them.

We find the unknown hatred growing up in the Muslims around. The people who were once upon a time friends and brothers now are trying to kill each other. The brutal ways of the government to curb revolution, and the anger of the people who are protesting and demanding freedom both lose the logic in the process and finally a lot of innocents are left with scarred souls. Sameera loses her father but understands that it was not Ali but the hatred in him which was responsible for her father’s death. She also tries to understand that this hatred due to the tragedy in his life and due to the selfish political system around has grown above everyone’s reach and that has brought the monster out of him.

The good point of this novel is it does not take any sides but shows the scenario of both sides in their true self. We tend to understand the surroundings of Ali and the Taya family who are always under the pressure of proving their loyalty towards the country because they are immigrants. Between these religious battles, the immigrants are lost and confused. Shia’s hate them because they feel that because of these immigrants they are not able to get good jobs in the country. This hatred grows with years and when such protests happen it gives birth to extreme tragic circumstances. We find Sameera caught between such circumstances and trying to understand Ali as a representative of the people protesting, and her own family who are working for the government and therefore need to be extremely loyal to His Majesty. This is a good book which speaks about the hatred being spread in the Muslim community on the name of religion and how the youth is succumbing to this philosophy of revolt. Finally a lot of young people die, many lose hope of freedom and days go on but the scars caused due to this religious fight remain forever.